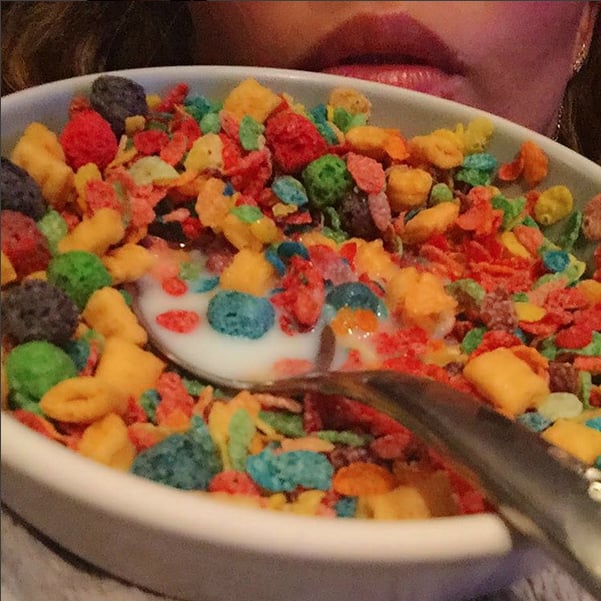 When Chrissy Teigen shared her latest pregnancy craving — a colorful bowl of "Cap'n Pebbles" cereal — on Instagram this weekend, she probably assumed she'd be able to connect with real women who've had equally unexpected late-night mashup snacks. But, you know what happens when you assume . . .

Sure, she had plenty of adoring fans supporting her choice of snack, but then came the haters: "Don't feed your baby that dyed crap," one user commented. "I love you, but don't eat this while pregnant… it's beyond bad for baby and of course it's not organic," noted another.

That's when Teigen took to Twitter with the best response, one we'd like to think is on behalf of regular moms everywhere:

Although it wasn't her first time sounding off on Twitter about her pregnancy, she continued her hilarious rant by admitting that she's "living off dyed food" and — gasp! — even tuna: "Gonna try to dye my tuna actually. Then have an icy, dyed vodka soda and that's just lunch."

The model, who revealed her struggles with conceiving this past Fall before announcing her pregnancy with husband John Legend, didn't stop there.

"Then I'm gonna f-cking take the trapeze class I've been meaning to take. Then maybe do a three-legged race, then probably rent sumo suits and battle strangers. Then a nice cigar in the hot tub. Oh today will be a delight indeed."

Fine, Chrissy, but, um, just make sure that cigar is USDA-certified organic, OK?