After a long, well-documented secondary infertility journey, Today meteorologist Dylan Dreyer is officially expecting her second son with her husband Brian Fichera in January 2020! Believe it or not, the 37-year-old mom found out the incredible news the day she was supposed to begin IVF, only to be told by her doctor that she no longer needed to. Dylan announced the news on The Today Show and then to her followers by sharing a video on Instagram of her 2-year-old son Calvin holding a sonogram declaring, "Two babies, five babies!" However, Dylan quickly set the record straight that she's expecting one child, not five!

Scroll through to get a look at how positively adorable Calvin is — after all, they'll only be a family of three for another few months! 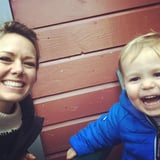 Baby Names
Shawn Johnson *Finally* Shared Her Baby Boy's Name, and It's a Trendy One!
by Alessia Santoro 2 days ago