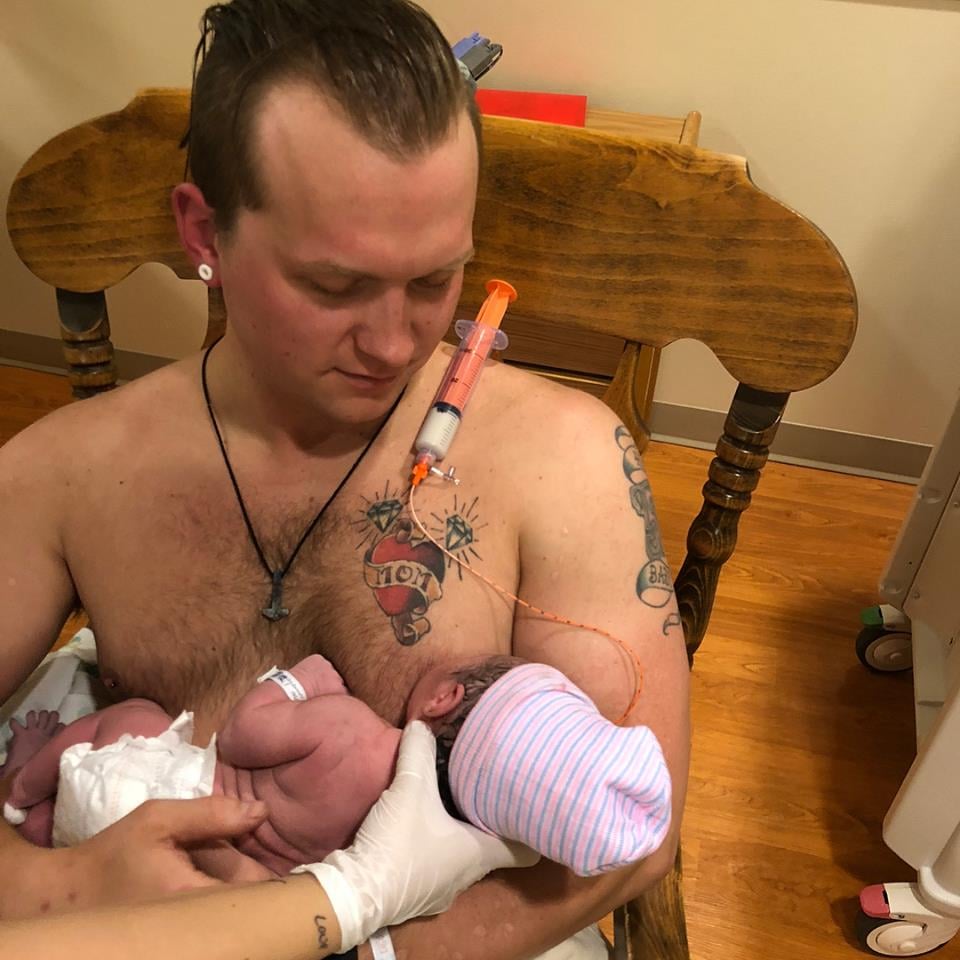 After his wife April had a seizure due to complications from preeclampsia after a C-section, Maxamillian Neubauer knew he needed to step up to the plate and care for his baby while his wife was unconscious. And while most fathers settle for a little skin-to-skin action, Max took it one step further — by "breastfeeding" his newborn daughter using a fake nipple.

Max told POPSUGAR that he went into full-on dad-mode as soon as he laid eyes on his newborn daughter, Rosalía Lupita Valentina Neubauer.

"I was so emotionally wrecked at that point. I saw my wife have a seizure and knew she had another one behind closed doors," he said. "Then to see this beautiful ball of joy come out those doors that I helped create and am now responsible for."

Rather than going the bottle route, Max did his best to ensure Rosalía had the most authentic breastfeeding experience possible by sticking a nipple shield to his chest and attaching a syringe filled with baby formula to it to mimic a breast.

"April and I decided early on that we were going to do immediate skin-to-skin with our baby," explained Max. "After her surgery, she was sedated and unable to feed or have contact with her, so I had to step up and get shirtless to make up some ground seeing as mama wasn't there."

"I was really just doing what my dad would have done for me."

Interestingly enough, Max is considered to be a pioneer of the whole process, according to Door County Medical. He was the first man to ever give this new form of bonding a try at the hospital: "I guess they have asked a few fathers but nobody said yes until me."

While Max was eager to help in any way possible, he admits he definitely needed a little help getting situated from the nursing staff.

"I needed a lot of guidance and helping hands since I'm not an expert on the matter. It was great in the end and as close as you can get to natural breastfeeding."

At the end of the day, Max admits that he was just trying to do what's best for his family. "I was really just doing what my dad would have done for me. I was doing what my wife would have wanted."

Thankfully, April is finally home and recovering. And we'd be lying if we said Rosalía wasn't one of the sweetest tots we've ever seen. Scroll through to a bird's eye view of Max's experience.

Related:
This Photo of a Mom at Target Is What We All Dream Public Breastfeeding Should Be Like
Previous Next Start Slideshow
FatherhoodBabiesBreastfeedingParenting News

Penn Badgley
Penn Badgley Admits His Pleasant Fatherhood Experience Is, Ahem, "Not Helpful" to His Role on You
by Kate Schweitzer 10/11