When people think of fairy-tale endings, it often involves a princess at last meeting her prince. For one little girl in Grand Rapids, MI, however, her happily ever after came in a courtroom where her adoption was finalized.

As 5-year-old Danielle Koning's foster parents were in the last stages of the long process last week, they – along with her caseworker – wanted the final proceedings to be memorable.

"It was a special situation that really snowballed out of a request form Danielle's caseworker, who knew Danielle loved Cinderella so much," Laura Mitchell, executive director for the Samaritas Foster Care Program, said. "One of other caseworkers kind of looks like Cinderella, so she said, 'Would you mind going to the hearing and dressing as Cinderella?'"

When other adoption staff members found out, several stepped forward to participate – which meant Sleeping Beauty, Elsa, Ariel, Rapunzel, and Prince Charming, to name a few, made their way into the courtroom to surprise Danielle.

Even the judge, Patricia Gardner, revealed a Snow White costume beneath her robe. 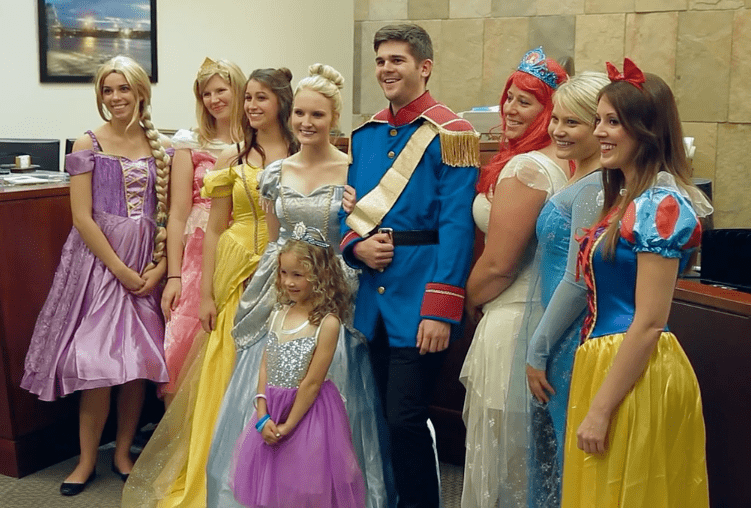 "I think it's really important to make that adoption day special for every kid in whatever capacity you can," Sarah Koning told ABC News of the hearing. "No matter what, if kids have been bounced around a lot, it really helps them to feel the permanency and know that they're not going anywhere now. We've been waiting so long for it, and it feels really good to be able to settle and be a real family."

Little Kids
This Adorable 5-Year-Old Is Her Mom's Biggest Hype Woman: "You Look So Beautiful Today!"
by Yerin Kim 13 hours ago