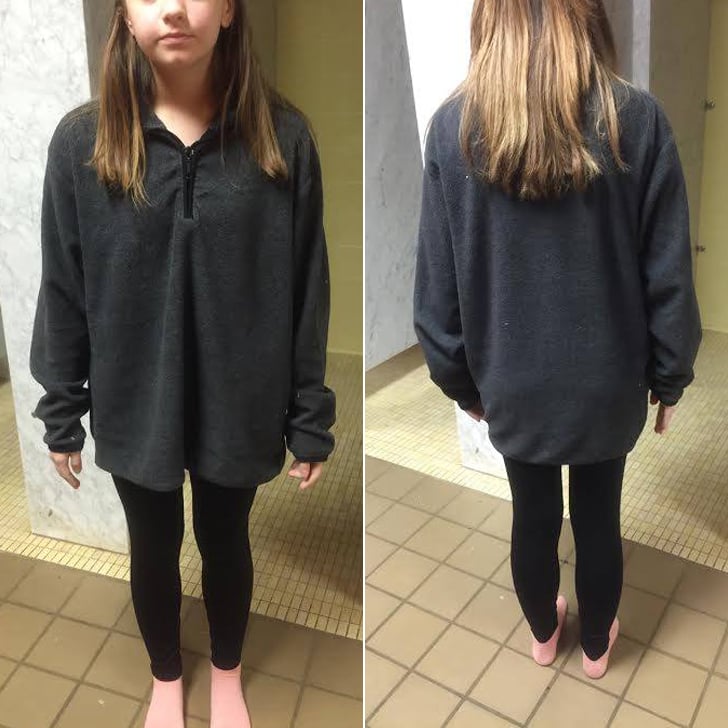 School dress codes can often be confusing and ill-conceived, but one student's experience at the very start of the school year was just plain confusing. Last month, Deanna Wolf expressed her frustrations on Facebook about school dress code policy and gender bias after her daughter — a sophomore in high school — was kicked out of class and placed in in-school suspension for improper dress. Her outfit, which appears to have been black leggings and an oversize fleece pullover, was deemed inappropriate by one faculty member. Apparently, leggings are not permissible if worn as pants themselves or else they'd be too "revealing" for the classroom.

In one of her comments, Deanna explained, "Leggings are okay if they wear a dress, shorts, or a skirt which is no shorter than 3 inches above the knees. But a shirt that does the same thing [is] apparently unacceptable. The thing is, boys wear shorter shorts than that and don't get in trouble. That speaks volumes."

For Deanna, the school's enforcement of this dress code perpetuates a bigger issue: "You are telling girls that their bodies are to be hidden, and that boys cannot control their minds if they see the basic female figure. It's disgusting and it belittles both sexes. Not to mention that this whole situation clearly states that a girl's education has less importance than a boy's education, and that her right to said education is secondary to providing a distraction free learning environment for the opposite sex."

Read the entire post for yourself and see if you agree with the faculty member's decision.

Huntsville City Schools, I would like to ask a question. What are you teaching our children about their bodies and...

Family Life
After Growing Up the Oldest of 12 Kids, This Mom Made an Adulting Basics YouTube Channel
by Chanel Vargas 14 hours ago

Parenting Humor
If Homeschooling Is Going Just OK For Your Family, You'll Definitely Relate to These Hilarious Fails
by Alessia Santoro 3 days ago