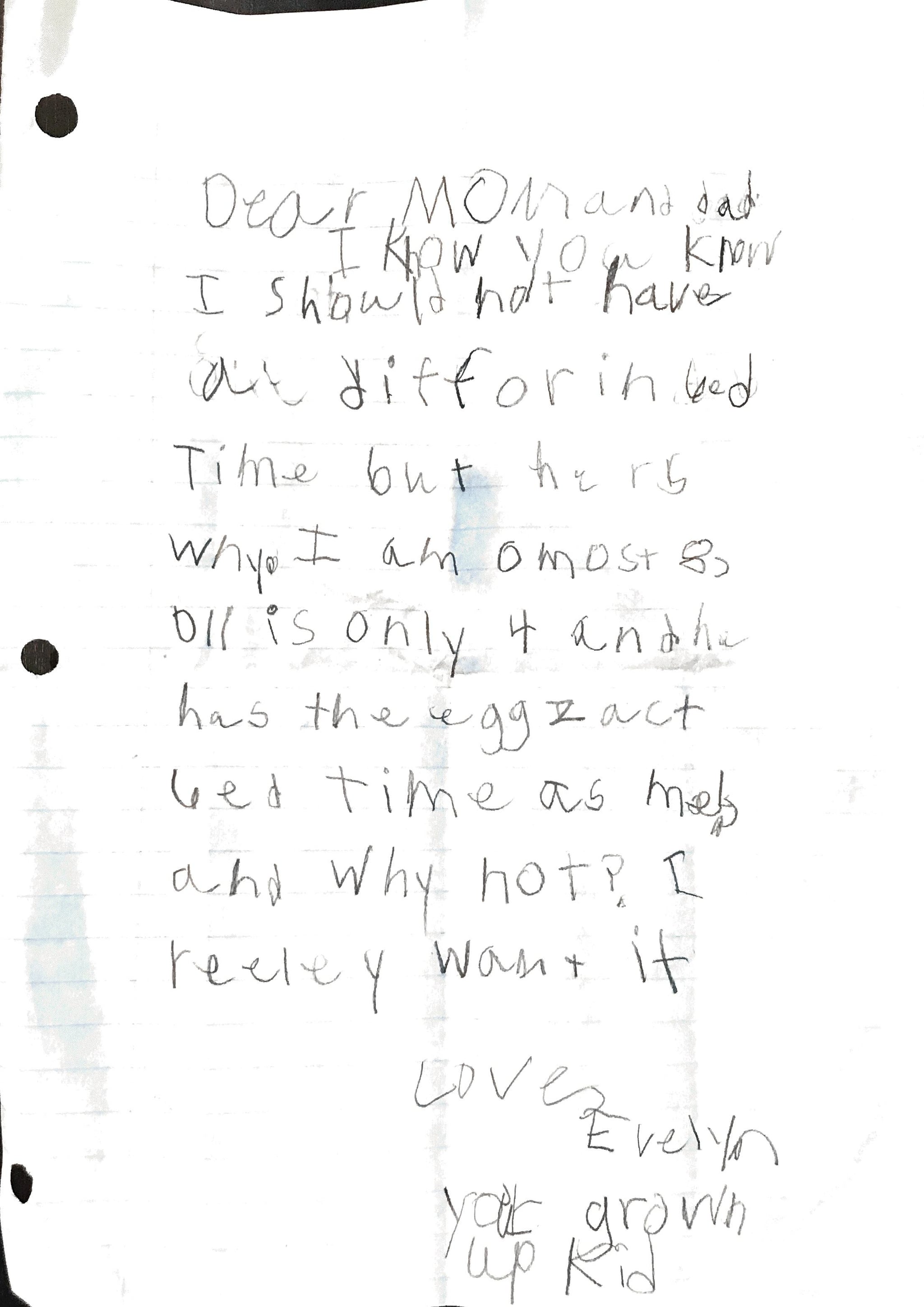 Ty Underwood and his wife, Mary, have always tried to impress upon their kids, 7-year-old Evelyn and 4-year-old Oliver, that whining will never solve your problems. And apparently, little Evelyn got the message loud and clear and instead went another hilarious route when it came to getting a later bedtime: writing a strongly worded memo. The dad originally posted the letter to Reddit, and it's since gone viral. He told POPSUGAR this wasn't the first time their daughter broached the subject of hitting the hay a little later.

"Evelyn has been asking for a later bedtime for months. Mary and I finally shut down the conversation when she could not give us a good reason why we should extend it," he said. "After putting our foot down about [bedtime] and telling her she will be sent to bed early the next time she asks, I guess she decided to work around the system."

Related:
Try Not to Laugh Hysterically at These Notes Home From School

The amazingly sassy note reads: "Dear Mom and Dad. I know you know I should not have a different bed time, but here is why . . . I am almost 8, Oli is only 4 and has the exact bed time as me, and why not? I really want it. Love, Evelyn Your Grown-Up Kid."

"She handed her letter over in a sealed envelope and told Mary that if we wanted to 'discuss the contents of this letter' that she would be available anytime."

And frankly, we're impressed with her persistence. Evelyn decided to "serve" her parents with the handwritten note one evening and apparently the delivery was as serious as a heart attack.

"Right before bed one night last week, she handed her letter over in a sealed envelope and told Mary that if we wanted to 'discuss the contents of this letter' that she would be available anytime," he said. "We both read it and after deciphering it (she has been working on her handwriting), we laughed about it for a good few minutes."

Although Ty and Mary didn't initially address the note right away, after waiting a few days, they decided that her level-headedness earned her a seat at the bargaining table: "We didn't talk to her about it for a few days and she didn't bring it up once. We decided that type of cleverness and assertive behavior should be rewarded and we opened the door to negotiations."

According to her dad, Evelyn ended up on top at the end of the day. "She now gets to stay up until 8:30 p.m. instead of 8 p.m., but that time can only be spent reading in bed and it's a provisional bedtime," he said, adding that, "If she is late getting ready for school in the mornings since she makes her own lunches, then the bedtime reverts back to 8."

And this isn't the first time Evelyn "outfoxed" her parents: "When she was 3, we told her that if she wouldn't eat her veggies with dinner, then she could be done and go to bed for the rest of the night," he said. "She would calmly get up, change into pajamas, brush her teeth, and climb into bed three hours early and stare at the ceiling until it got dark and only then fall asleep. It's hard to be upset at that type of conviction."