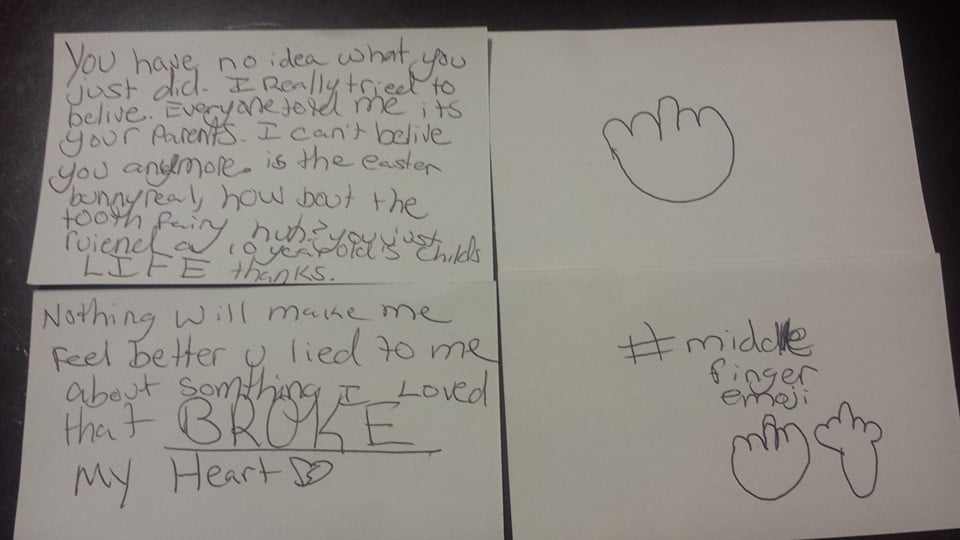 Oops! This was not the reaction Nicki Adams was probably expecting when she told her 10-year-old daughter, Belle, the truth about Santa Claus. After breaking the news — according to the caption on Nicki's Facebook post, her daughter had been "asking every day" — Belle wrote what may be the most epic letter to parents of all time.

The time has finally come. Belle asked point blank about Santa and she's been asking every day. So we were truthful and...
Posted by Nicki Adams on Thursday, December 10, 2015

In it, she wrote:

"You have no idea what you just did. I really tried to believe. Everyone told me it's your parents (pretending to be Santa). Is the Easter bunny real? How 'bout the tooth fairy, huh?"

But it is her final signature — a drawing of a fist — which she hashtagged #middlefingeremoji" that has us laughing out loud.

Her mother said Belle slid the letter under her parents' door after they broke the news and they "lost our ever-loving sh*t" at the emoji. "We had to move to the bathroom to have a good laugh before we talked to her about the notes," Nicki told Huffington Post.

But fear not, Nicki said a few minutes later Belle was fine and was back in the Christmas spirit!

Babies
Mom Uses Lorena Pages's TikTok-Famous "Love It, Couldn't Wear It" Audio on a Video of Her Baby
by Alessia Santoro 5 days ago