As Colorado Governor Jared Polis says, "There's no LGBT way to change a kid's diaper. Or dress your kid for school." He should know. As a father of two with partner Marlon Reis, Polis understands that all families, no matter their makeup, deal with many of the same issues. 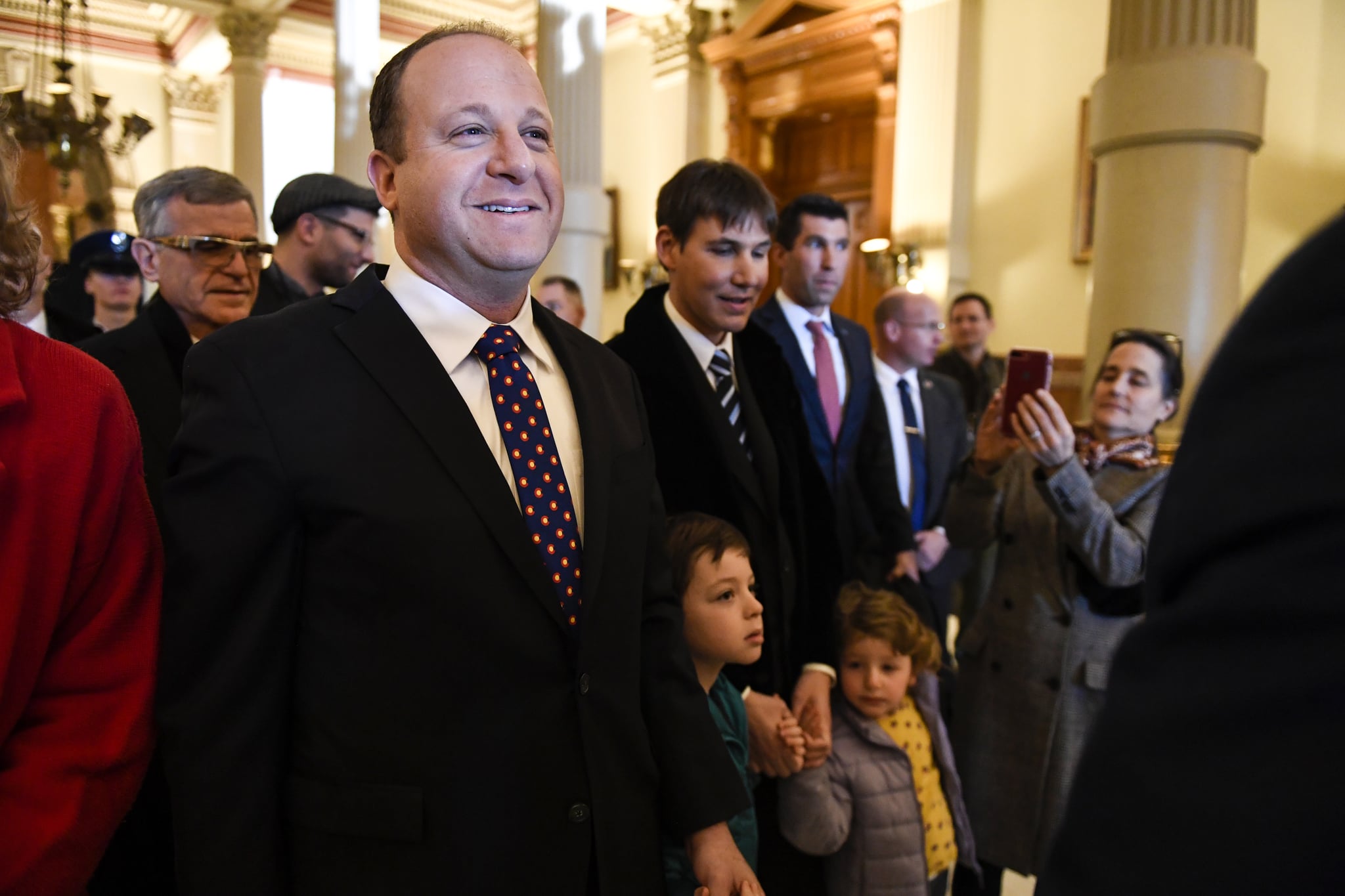 Polis with his partner, Marlon Reis, on Inauguration Day at the Colorado State Capitol in January.

In January 2019, Polis became the first openly gay person and first gay dad to serve as a governor of a state. (Governor Kate Brown of Oregon, who is bisexual, was the first member of the LGBTQ+ community elected as a governor in America.) Motivated by his experiences as a parent, Governor Polis has made family-friendly policies a centerpiece of his new administration. "My vision for Colorado is about making Colorado more livable for all families," Polis tells POPSUGAR. One big area of focus: saving families money on early childhood education.

The governor has big goals. And he seems determined to have his work as governor judged by what he's able to accomplish, not by his biography. But his rise to power has provided an example that expands the previously narrow offering of role models and families in high-profile positions.

Polis got into politics after a successful run in the early Dot Com days. An early adopter of the internet, he created a dial-up company with his friends in his Princeton dorm. They went on to sell it for $23 million in 1998. Next, he had the idea to bring his family's greeting card business online. At one point, the site for Blue Mountain ecards was the sixth most popular site on the internet. Polis helped his family sell the business for $780 million in 1999. In 2006, he sold another company, ProFlowers, for $470 million. With financial freedom, Polis turned to politics, first getting elected to the school board in 2000 and then running for Congress in 2008.

Meanwhile, in his personal life, Polis and his partner welcomed a son, Caspian Julius ("CJ"), in 2011, and a daughter, Cora Barucha, in 2014. In his elected positions, Polis spent a lot of time focused on education, and being a dad confirmed his dedication to the issue. "The data always pointed to the importance of early childhood education. But now as a father of a 7-year-old and a 4-year-old, I really see it in my own kids. I see the difference that preschool and kindergarten can make and how fortunate I am to have been able to afford that for my kids," he continued. 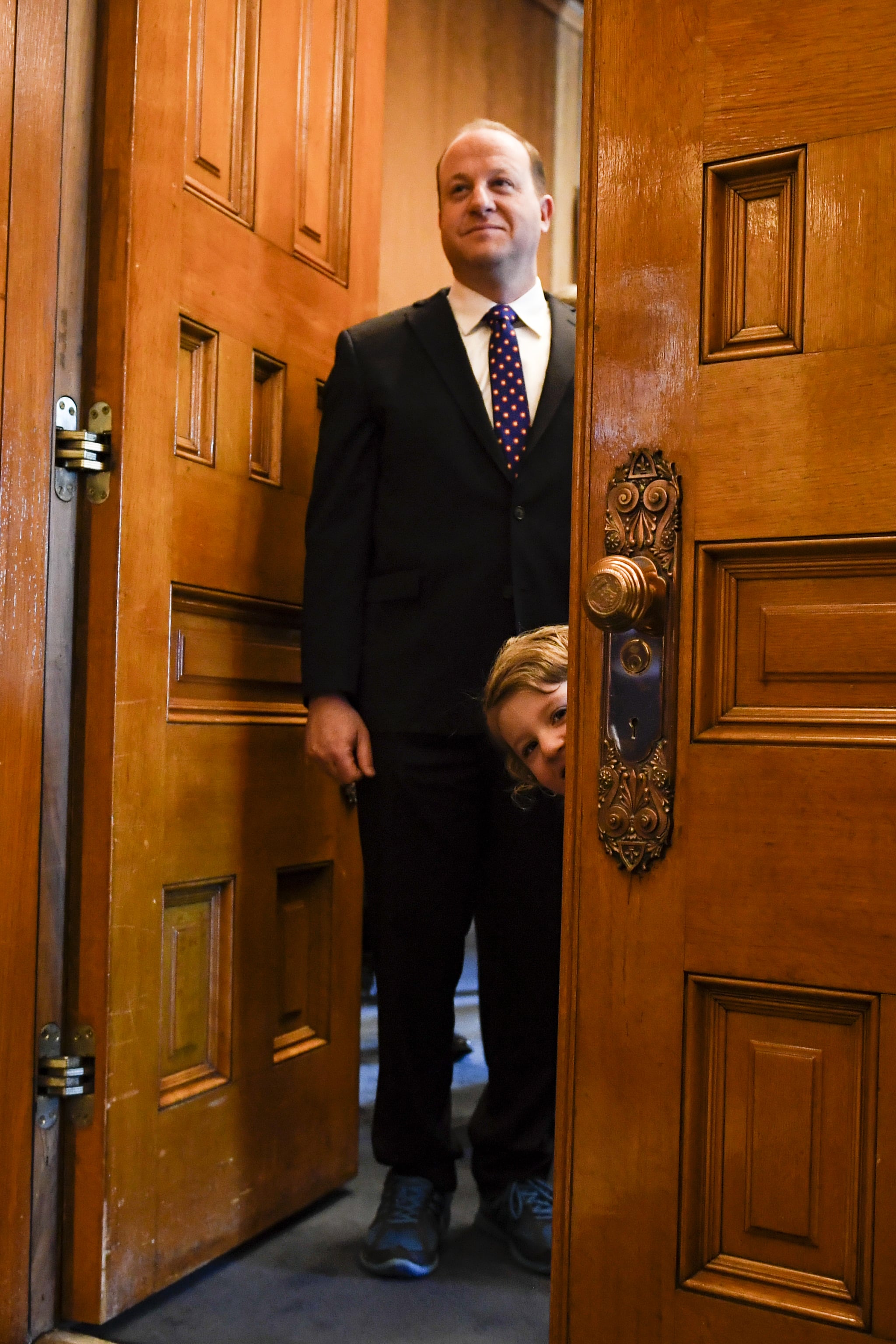 Polis and daughter Cora in his office before his inauguration in January.

Working For Policies That Help All Families

Thanks to his success in technology, Polis was one of the 10 richest members of Congress before he left to be governor — and he wants to increase opportunities for families who are less fortunate than his. We asked him how we can make our society more inclusive and fair for all families, including those who may not fit the traditional mold or who live on tight budgets. Again, it came down to education.

"Our state currently funds half-day kindergarten, so we are pushing to fund full-day kindergarten," Polis told us. As many parents can attest, child care that ends midday requires you to put together an often expensive patchwork plan of after-school care, nannies, or family help, assuming you can access any of that. "One of the biggest things we hear about from young families — and, of course, I know this firsthand as a father of a preschooler — is the high cost of preschool. If we want our state to be more livable for young families, we need to do a better job of expanding access to early childhood education," Polis said.

"While some families can afford kindergarten and preschool, why should their kids start out at an advantage over families that can't?"

Polis believes that if we truly care about fixing the persistent achievement gaps based on income and race and geography, then we must recognize that early childhood education is the best place to make a difference. He continued, "While some families can afford kindergarten and preschool, why should their kids start out at an advantage over families that can't?"

Paid family leave is another policy Polis is passionate about. Currently, Colorado offers some job protection for new parents, but no paid leave. "We want our state to be the best state to raise a family. Part of that is making sure new parents can be with their kids in those precious first few weeks that you never get back," he said. With that in mind, Polis's administration is working on a paid family- and medical-leave policy they hope to implement in the near future. Polis said he would support paid leave for both mothers and fathers, as well as foster parents.

"We have some federal protections that you can't be fired for taking that time off. But if you're not compensated, for many people it's not a real choice, if you're only one paycheck away from making your rent or mortgage," he acknowledged. "There needs to be a way that you can support yourself and also spend some time with your children." Sadly, this basic goal is not reflected in America's current laws, and we need leaders like Polis to change that. 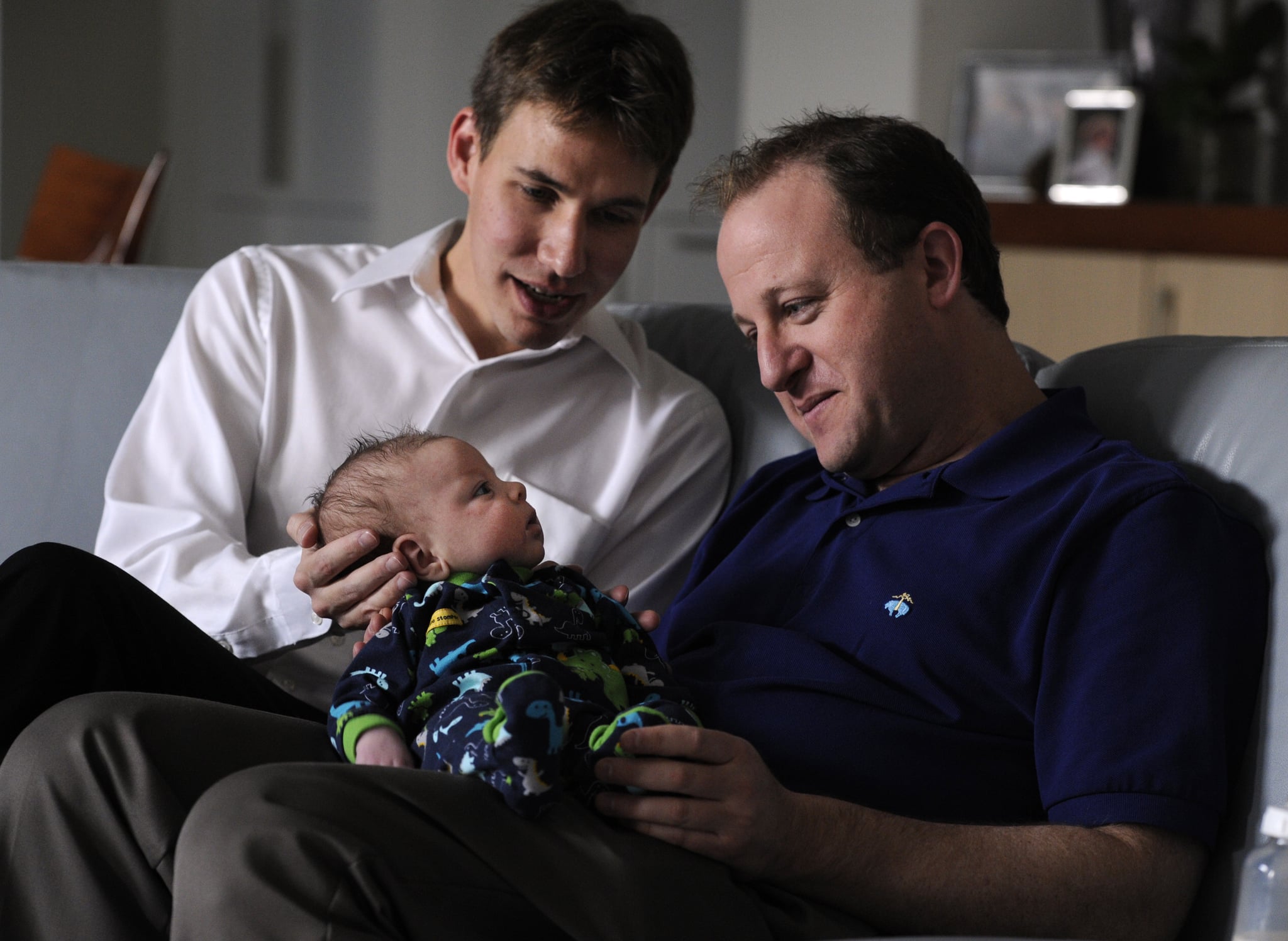 Recognizing That Family Is Family

Americans take diverse paths to create family, and that's something to celebrate. "There are all kinds of Colorado families," Polis pointed out. "There are traditional families with a mom and a dad. There are single-parent families, where Mom's the only parent or Dad's the only parent. There are grandparents raising kids. There's just Grandma raising their kids. There are same-sex couples. You name it." Polis said that he wants to make sure that no matter what your family background is, his state is a place you can raise your kids with support. "All kinds of families are strong, loving units," he said, "and we should value all families and help make sure kids from any kind of family background can grow up to succeed."

"Many states, including Colorado, are moving forward with an inclusive vision where we celebrate everyone, regardless of who they are or who they love."

While there have been great strides made toward equality in the last decade, including marriage equality and rights for gay parents, the Trump administration has demonstrated that the fight isn't over. President Donald Trump worked to ban transgender people from serving in the military, has appointed judges and officials with extreme anti-LGBTQ+ records, and has instructed federal agencies to respect "religious liberty," which could be used to justify discrimination against LGBTQ+ people. But Polis is still hopeful, thanks to what he sees in Colorado. "There's a lot of pushback at the state level, including [in] Colorado," he explains. A theme of Polis's inauguration and administration has been "Colorado For All."

With public figures like Polis not only providing uplifting examples with their own personal stories but also doing the hard work for other families, we have hope, too. He summed up his mission: "Many states, including Colorado, are moving forward with an inclusive vision where we celebrate everyone, regardless of who they are or who they love."

Demi Lovato
Demi Lovato Is Being Accused of "Queer Tourism" For Changing Her Pronouns. Here's Why That's Harmful.
by Emma Flint 2 days ago

Movies
Hari Nef to Play Candy Darling in Biopic: "She Taught Girls Like Me to Dream"
by Eden Arielle Gordon 6 days ago