Today's Jenna Bush Hager and Savannah Guthrie are coming to terms with how fast kids tend to grow up, and yep, it's relatable as hell.

Jenna, whose oldest daughter, Mila, just graduated Kindergarten (and whose youngest is expected to be born within the next month or so!), says that all she could focus on during the ceremony was when they started talking about how all of the kindergarteners would be moving up to first grade. "I looked at my friend and was like, 'How? How do I have a first grader?'" she told Savannah. "Time goes by so fast. This little girl is a girl, and she used to be a tiny baby." 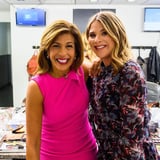 That sentiment is one Savannah completely echoes, which is funny, because it's one of the things everyone told her when she became a mom in 2014. "You know how there's certain things that parents tell you when you first become a mom?" she asked Jenna. "I've found that they're all really true, and one of them is it goes so fast. It's the blink of an eye. It really is." Her 4-year-old daughter, Vale, is about to graduate pre-K and head off to kindergarten, and all Savannah can say is, "I can't believe it."

To lighten the emotional load that is thinking about how fast kids grow from tiny babies, Savannah shared a lighthearted tidbit about Vale's upcoming preschool graduation ceremony. "I was cracking up because they're going to do a bunch of songs that are supposed to be a surprise, but she was practicing one of them, and it's literally to Ariana Grande's 'Thank U, Next.'" LOL.