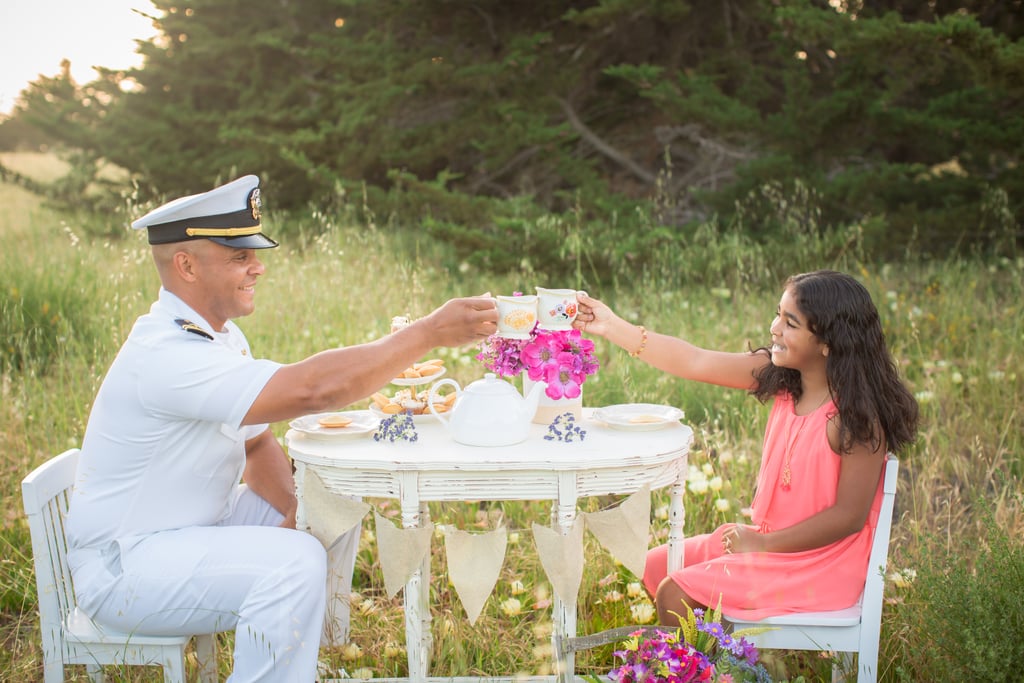 Some photos just leave a big smile on your face, and Vanessa Hicks's photography does just that. The photographer came up with a brilliant photo series highlighting the bond between military parents and their kids by having dads participate in a tea party with their daughters.

"Every time families move, children have to make new friends, get used to new schools, and find new clubs and teams to join," she told The Huffington Post. "So, I wanted to document a special moment with a little girl and the one person that she looks up to the most, the one person who fights for our freedom."

The project, called Military Tea Time Mini Sessions, features dads enjoying tea with their little girls in the most beautiful and serene setting. Vanessa, a military veteran, revealed that she has a personal attachment to the project, as her husband is a naval officer who has served for 16 years. She even photographed him with her daughters during teatime and said that the best part of the project is "seeing the glow on these little girls' faces."

Although only dads and daughters have signed up for these photography sessions, Vanessa expressed her desire to create a new series with a theme that would appeal to boys.

"I hope people see that even though these are the men and women who fight for our country, day in and day out, and make so many sacrifices, that they are just people as well," she said. "Parents, spouses, sons and daughters."

This isn't the first time Vanessa has shown off her artistry with a military theme. The photographer most notably sparked debate when she shared a photo of a veteran holding a baby in an American flag. This time around, however, it seems her teatime photo series has touched the hearts of all military families, especially the little girls. So, sip on some tea and read ahead to see some of Vanessa's stunning works.

Pregnancy
Constance Wu on Returning to Work After First Child: "It Was the Hardest Day"
by Sara Youngblood Gregory 7/25/22