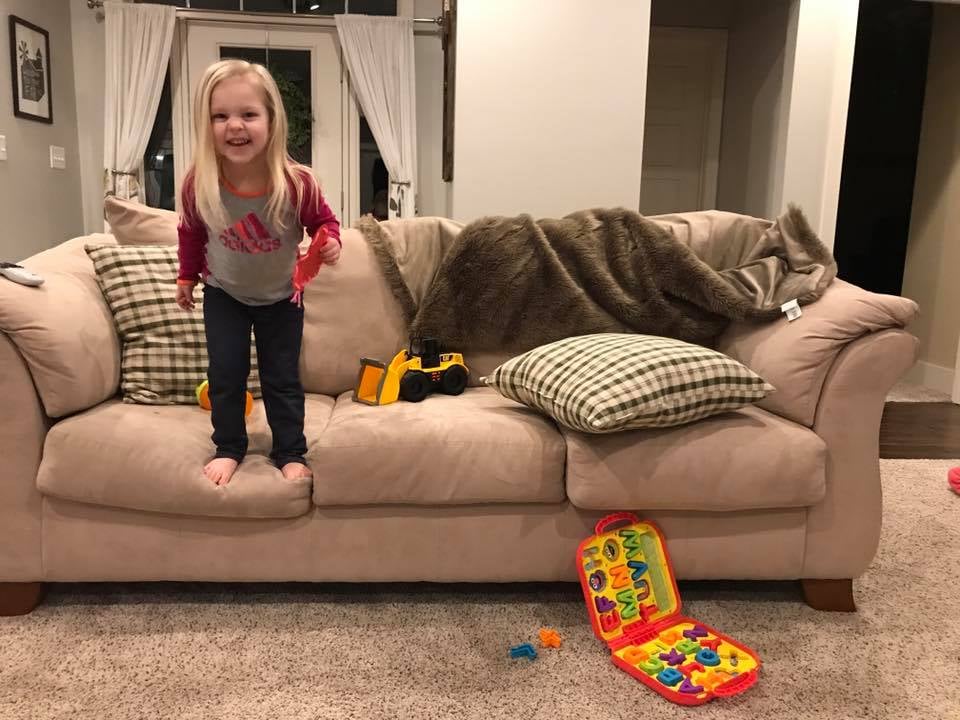 Lauren Eberspacher admits that on her most hectic afternoon with the kids, she finds her mind drifting to thoughts of the days when her children are grown, her house is spotless, and she finally owns that white couch from Pottery Barn she's been eyeing for years. In a Facebook post aimed at her husband, Lauren explained that although part of her looks forward to the impending peace and quiet, she reminds herself it's important to revel in her family's current state of chaos.

Lauren goes on to fantasize about how clean her dream couch is going to be, consistently free of any grime, dirt, or kid-related mess:

And it's gonna be clean. There aren't going to be juice stains on it, there won't be apple cores shoved in between the cushions, and it won't smell like curdled milk. There won't be worn stains on the arms where the kids have jumped off of it and the cushions won't sink down in the middle from where they bounced on them. We won't have to scrub out stains or sprinkle baking soda on it after someone doesn't make it to the potty in time.

Related:
Why the Small Moments With Your Baby Are the Ones to Cherish

Sounds glorious, right? She also touched on every busy parent's dream: having company over without having to use an entire bottle of upholstery cleaner to scrub the couch down beforehand.

"When people come over, we aren't gonna have to clear the toys off of it. The throw pillows are always going to be in their rightful place and the throw blankets will always be folded on the arm rest where they belong, not strategically laid out so that they cover the tears in the cushions or the stains on the fabric," she wrote. "We won't sit down on tiny cars or get poked by Barbie arms. We will just sit with our company and enjoy the comfort of our white couch."

After letting herself daydream for a few moments, Lauren snapped back to reality because after all, your kids don't stay little forever:

We're gonna miss those stains because it's going to mean that our kids aren't so little anymore . . . I'm sure there's going to be a twinge as we reminisce about our kids jumping off of our couch from years ago. Pretending they are superheroes or going on wild adventures. I think that someday we're gonna miss the years of our old, worn couch . . . But we will miss the reminders of the little people who once played here. We won't hear their laughter running down the hallways as they get ready to launch onto our old couch. We won't be interrupted by "I love you, Mommy"s or cuddles on a rainy day.

She urges parents to celebrate even the dirtiest, craziest moments with their kiddos because before you know it, it'll just be you and your partner on that white couch.

"Let's cherish the days of our old, worn couch. Because the years we have with it will undoubtedly be the most precious, exhausting, beautiful days of our lives. Yes, someday we will get a white couch. But today I'm thankful for the one that we have . . . for the little people we have. Stains and all."

Family Life
Thinking About Moving Your Kids Into the Same Bedroom? Follow These Expert Tips
by Sydni Ellis 5 days ago