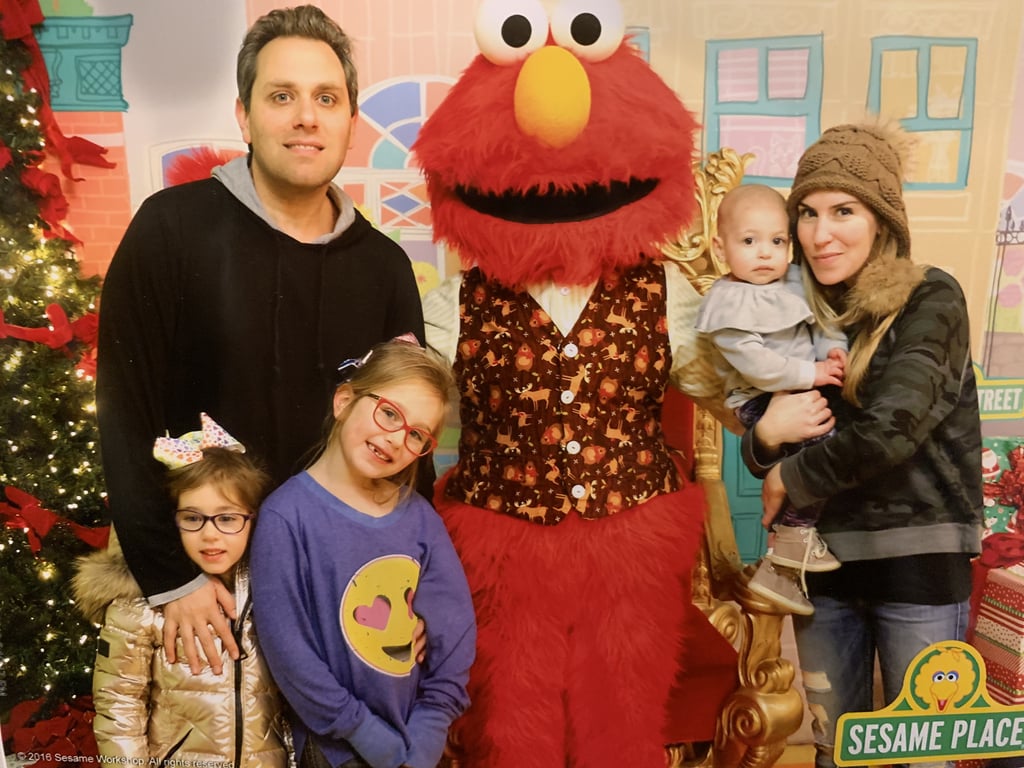 Jamie Weiss knew something was off with her youngest daughter Sawyer when she had a swollen eye, a low-grade fever, and was constipated seemingly out of nowhere after her 10-month pediatrician visit, during which doctors said, "10 months never looked better than this." Although Sawyer's doctors asked why Jamie brought her back into their offices so soon after her visit and told her to take her daughter home, she followed her mother's intuition and brought Sawyer into the emergency room. It's when someone asked her after 22 hours in the ER if she'd like to sit down, that she knew something was really wrong.

Doctors found a large tumor inside Sawyer's belly, and upon further testing, the 10-month-old was diagnosed with stage-four neuroblastoma that had spread through 85 percent of her body.

"There are no words to describe the pain and horror I experienced in that moment," Jamie wrote in a blurb about her daughter's story. "I always assumed I would just die if something happened to one of my children. When it was upon me, the words, 'Your daughter has a large tumor in her abdomen,' I understood clearly my child's illness would not kill me, even if I wanted it to. Despite this unimaginable diagnosis for our baby, who had never even had a cold before this, we were not scared. We held onto the mantra: treatable, curable."

Related:
This Is 10 Months With Pediatric Cancer

In that moment, Jamie found the strength needed to get her daughter and family through a nightmare diagnoses, and thankfully, Sawyer is now in remission after a nine-month fight that included eight rounds of chemotherapy, 11 blood transfusions, a nine-hour surgery, and a stem cell collection — but because "four out of five children surviving cancer is not nearly enough," Jamie's fight against cancer is just getting started.

"October 29th at 6:17 p.m., we got a phone call from our doctor letting us know that Sawyer's scans were all clear — no evidence of disease. I buried my face in the nook of my husband's arm, and I ugly cried. I was filled with as much joy as the first time I held her. Then, my heart sank. My second thought was about the families who have yet to receive this type of call. I kept thinking about the kids we met, living chemo to chemo, praying for a medical breakthrough that will save their lives," Jamie said. "When I told our 7-year-old about our good news, her first response was: that's terrific, Mom, but we're still going to help the other children, right? (As if that day could get any better.) We hope that Sawyer is on the other side of cancer. Regardless, our family is all in this fight. Thinking of those families, brave in the face of danger, I am resolved. Cancer, this means war."

"My family endured a real-life nightmare. I choose to focus on the silver lining because any alternative feels like a disservice to my warrior princess daughter."

Jamie joined forces with Cycle for Survival, a movement to beat rare cancers that provides people with a way to physically fight back against cancer diagnoses. Cycle for Survival is owned and operated by Memorial Sloan Kettering Cancer Center in New York, where Sawyer was treated by an incredible team that included Dr. La Quaglia, who Jamie calls "a true hero." Every dollar raised at one of Cycle for Survival's indoor cycling events held at Equinox gyms goes "directly to lifesaving research studies and clinical trials within six months" of an event. In its 13 years, Cycle for Survival has raised more than $195 million for rare cancer research, and $39 million in 2018 alone. Jamie's team, the Gold Ribbon Riders, are already well on their way to reaching their $300,000 fundraising goal by the time of their event on March 2 — and they're currently the No. 1 top fundraising team nationwide.

Related:
The Incredible Story Behind a Dying Father’s Book For His Young Son

But their team's reach goes beyond raising money to directly fund pediatric cancer research at MSK — Jamie says her three kids and friends' kids have put all the hard fundraising work the team is doing into unique perspective.

"Obviously, the biggest benefit of all this is the money we raise for the research, and the difference that that will be able to make," Jamie told POPSUGAR. "But I think that in doing good, there's this amazing silver lining that I never expected when I got involved with this, and it's that the kids are so excited to help. One of our friend's kids made a drawing for our team shirts that makes me cry every time I look at it of this little boy wearing a helmet, flying above space; and he said to his mom, 'Kids all over the world with cancer deserve our help.' It's amazing to see these young children and their compassion for other kids." This empathy, Jamie says, moves her every time.

"My family endured a real-life nightmare. I choose to focus on the silver lining because any alternative feels like a disservice to my warrior princess daughter," Jamie wrote. "Please stand with us, ride with us. Battle childhood cancer with us. Let's offer hope to the families who are still waiting for that best-news-ever phone call. Be part of the silver lining in Sawyer's gold ribbon journey." To support Jamie's team in the fight against pediatric cancers, you can donate through Cycle for Survival.