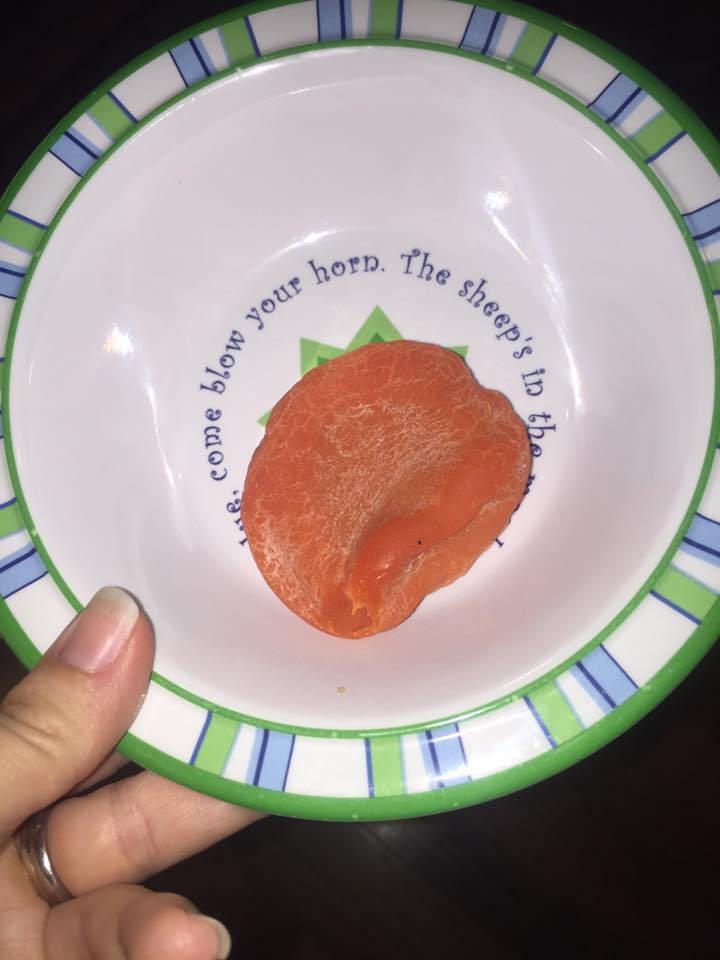 Sometimes with motherhood, you don't know whether to laugh or cry, and after she came back from a business trip last Fall, Ashford Evans's kids had her doing both. Despite how disgusting a seemingly sweet surprise turned out to be, this mom's story just keeps getting better, so she had to share her harrowing tale on her blog, Biscuits and Crazy, for all to enjoy — after the initial shock wore off.

It all started after the mother of three returned from a long day of traveling and was greeted by the sweet silence of an empty house. That should've been a sign that things were off, but her homecoming was about to get so much weirder.

Aside from the peaceful emptiness, Ashford noticed how clean the house was and was feeling grateful for her husband's thoughtful gesture.

One of the children's cereal bowls sitting on the shelf with what seemed to be an old bar of soap sitting in it.

Even though Ashford didn't remember buying this delightful-smelling bar of soap, she chalked it up to a surprise from her three little ones and moved on.

I picked it up and held it to my nose breathing the scent in. The smell of fresh grapefruit in a perfectly silent house is just short of heaven I believe.

The thing was, I just couldn't quite place when I had bought fancy soap and just exactly where they had found it. Throughout the night I returned several times to inhale its tropical scent. In between making dinner and washing my face. I never bothered to wash my hands after fondling it because it was, afterall, just soap.

Ashford lovingly refers to her kiddos on her blog as Eeny, Meeny, and Miny, and it turns out that their surprise wasn't in fact fancy soap and instead left her wishing for disinfectant.

The next morning . . . Eeny emerged from the guest bathroom pressing the bar to her lips and breathing deeply saying "This is my favorite. I love the way this smells."

"I know!" I wholeheartedly agreed. "What IS that? Where did you guys get that?" I asked.

"Meeny found it in the boys bathroom at Tae Kwon Do and brought it home," she happily replied.

And that's when it hit me. It wasn't some upscale boutique $15 soap I had been caressing for the last 12 hours. It was a urinal cake.

Instead of disinfecting with a fancy bar of soap, Ashford had been sniffing and rubbing a urinal cake from a public bathroom, and her reaction to this revelation is every mother.

With this realization I screamed and jerked it from her [Eeny's] hands flinging it into the trashcan.

And everything went black.

When I came to I realized I had only two options. As I went through my memory and all the things I had touched [eaten] since touching the vile thing I realized that in combination with all the things my kids had touched we really didn't have much of a choice. I mean Tae Kwon Do is on Wednesdays and this was now Saturday!!!! This THING has touched basically everything in my house at this point.

So clearly our options were 1. Burn the house to the ground or 2. Pretend like it never happened and drink a bottle of wine [or two]. I'll leave you guessing as to which I chose.

But either way, here's to kids being the most disgusting creatures ever to crawl the face of the earth and to teaching us some humility in the process.