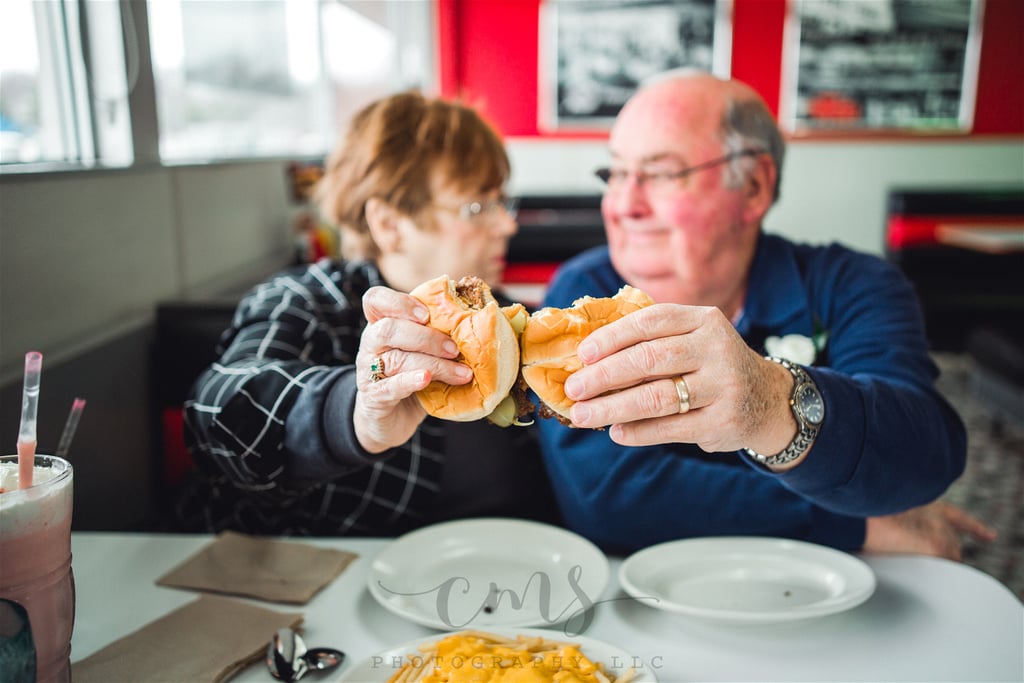 Courtney Stepp, a photographer from O'Fallon, MO, knew that her grandparents Fran and Elmer have the type of true love that can stand the test of time. So when the pair's 55-year anniversary rolled around, she decided to capture the beauty of their marriage in a photo shoot in the restaurant where the couple first met. Fran explained the exact moment she met Elmer in a blog post, and honestly, we're gushing:

I first met my husband Elmer on a chilly rainy day in March of 1962. We met at the Rock Road Steak 'n Shake which is no longer there. Steak 'n Shake was a place where teenagers would meet, hang out and have fun. My friend and I were waiting to meet with some friends, when Elmer who was in the next car was trying to get our attention. I rolled down the window and stared at him. Elmer said, "Your windshield wipers are squeaking miss." I proceeded with "no kidding" and further rolled up my windows.

And although the exact restaurant that Elmer and Fran first exchanged glances at had closed down long ago, Courtney did the next best thing: she had the photo shoot done in the chain's nearest location. She told POPSUGAR how much taking the photos meant to her:

"They love to travel. I wanted to re-create a shoot that they can have for keepsake memories to show my children one day and to bring back the memories they had from the first time they met," she said, adding, "They mean so much to me and truly love and care for so many people. Because of them, I have been able to live an incredible life."

Scroll through to see these two love bugs in action, milkshakes and all.

Related:
This Couple Had Their Wedding Photos Taken at Target, and Yes, We're Insanely Jealous!
Previous Next Start Slideshow
PhotographyMarriageGrandparents

Photography
What's Happening to Instagram?
by Haley Lyndes 1 week ago