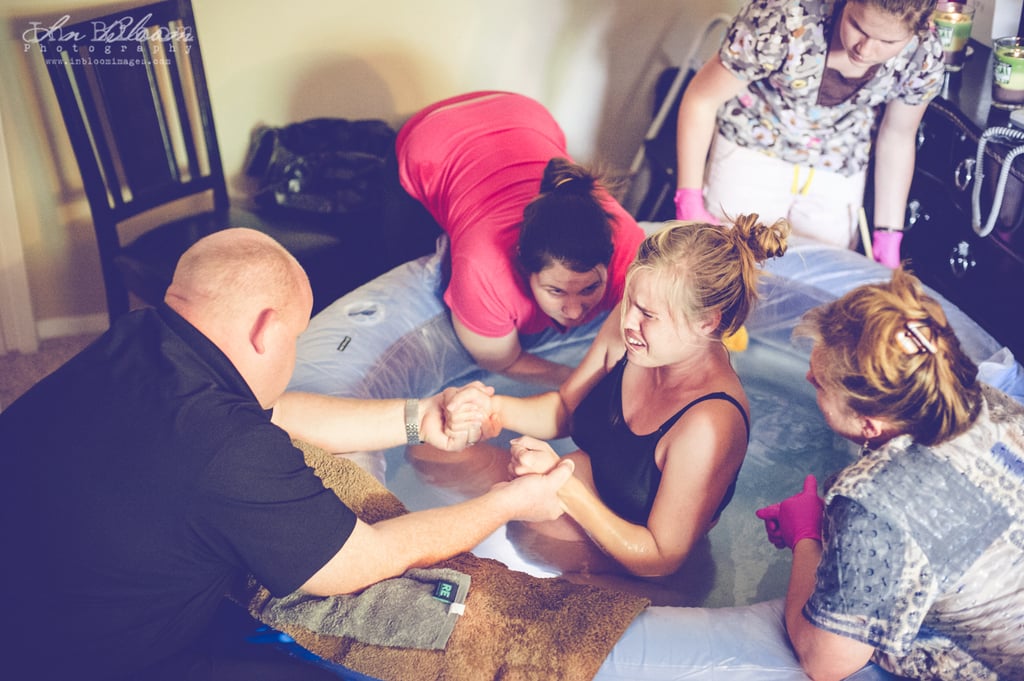 An Intense Home Birth That Left Everyone Breathless

Karyn Carbone of In Bloom Photography loves taking birth photos. The Sweetwater, TX, photographer is thrilled that more moms are welcoming photographers into their delivery rooms and home births to document the momentous days. And while she's witnessed and photographed just about every type of birth out there, some situations still take her by surprise.

When Carbone arrived at Ashley's home, the mom-to-be's labor was progressing along smoothly. This was Ashley's fifth birth, her second at home, so she knew what she was doing. She was surrounded by a team of midwives and her doula, who were all monitoring her and the baby closely. Everything was so relaxed that Ashley's youngest daughter, Zoelle, was busy watching cartoons while bouncing on the birth ball. As the labor progressed into the transition phase, Ashley began experiencing back labor, so the group moved to the floor to rest on the birth ball to help things progress. With each contraction, the doula applied counter-pressure on her back to ease the pain, and Ashley cried quiet tears, similar to what she experienced with her previous births.

With crowning feeling imminent, Ashley moved back into the tub to ease the birth. After a few hours and several different positions, the group moved into the bathroom to let gravity do its job while Ashley sat on a birth stool. Still no movement. The midwife determined that the baby was in a "brow presentation," a rare condition where the largest area of the baby's head — the eyebrow area — comes out first. Once Ashley fought to deliver the head, it was another eight minutes before the body was delivered. It seems baby Zinn had "extended shoulder dystocia" — like a dislocated shoulder — and the midwife had to turn and manipulate the shoulders to dislodge the body. "It was an intense couple of minutes as everyone worked frantically to get this baby out," Carbone shared. "At one point I felt as though perhaps I should stop shooting, but kept on."

When Zinn finally arrived, he was unresponsive and barely had a heartbeat. 911 had already been called, and the midwives had started CPR. By the time the medics arrived, the baby was breathing and his heart tones were stronger. "He made these precious little sighs as he was trying to breathe that were music to all of our ears." The medics rushed him to the hospital, and by the time he arrived, his Apgar scores were where they should be.

"I kept shooting through the whole thing, and I'm so glad I did," Carbone says. "I stayed behind with Ashley, and my photos were the exact thing she needed to see in order to get her placenta to detach. Seeing the baby, even on the back of my camera, helped with the oxytocin the body needed to complete the process! Literally 10 seconds after seeing her sweet baby on the back of my camera, her placenta was delivered!"

As Carbone made the new mom a peanut butter sandwich and helped her pack her bag, the midwife cleared Ashley to go straight to the hospital to meet up with Zinn and her husband in the NICU. Two-and-a-half days later, baby Zinn joined his siblings at home.

Keep reading to see the home birth and meet the adorable Zinn!