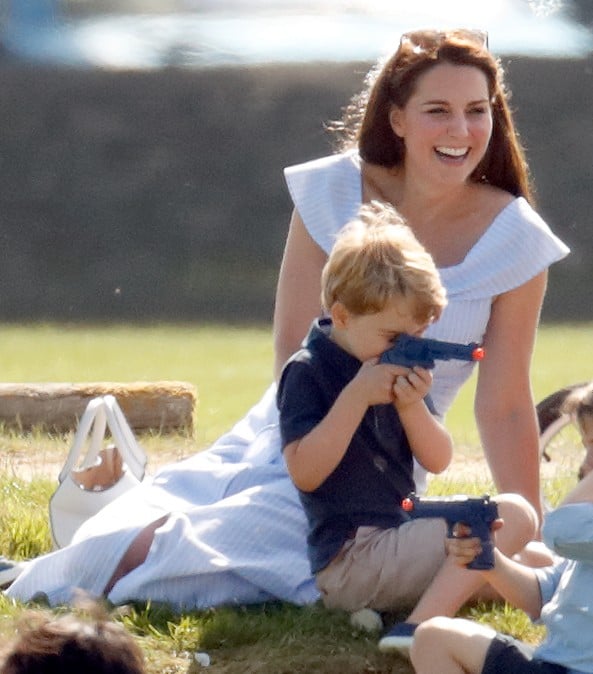 After several high-profile events, the royal family seemed finally ready to relax this past Sunday, as Kate Middleton, Prince George, and Princess Charlotte set up shop on a grassy hill to cheer on Prince William in the Maserati Royal Charity Polo Trophy. George and Charlotte, in particular, were dressed for a day of play with friends on the sidelines, and they had a smattering of toys to keep them busy — pint-size polo mallets, an extra-long Slinky, a plastic walkie-talkie, and a toy gun.

It was that last item — which was part of plastic-wrapped set of "SWAT" toys that included the realistic black toy gun, a set of handcuffs, a compass, and a serrated knife — that has people across the globe concerned.

In photos from the afternoon, George could be seen peering through the gun's viewfinder, pointing it at a friend, and even aiming it directly at his mom's face.

Although it's a disturbing visual to many US citizens, gun violence is far less of a national crisis in the UK as it is in America. The gun homicide rate in England is roughly 50 to 60 killings annually, whereas the US experiences 160 times more — roughly 8,100. In fact, the US accounts for 75 percent of all children murdered in the developing world, and kids in the US are 17 times more likely to be killed by a gun than elsewhere. It's the third-leading cause of death for children, taking nearly 1,300 lives each year).

Still, even if Kate doesn't have to worry about gun dangers in her own country, there's certainly a valid concern that toy guns, like the one George held, are often made to look strikingly similar to real ones. In the past two years, 86 people carrying fake guns were killed by police in the US, and that's not counting the terrifying risk of accidental injury in the event a child mistakenly plays with a real, loaded firearm. To that end, concerned followers took to Twitter to share their outrage:

This isn't okay anymore... My American side here, biased maybe b/c of everyday #gunviolence in USA,but my British side agrees. No child in this day and age should look at any gun as a fun toy. This looks far too real. .(And I LOVE Prince George, don't get me wrong!) @teamtrace pic.twitter.com/UEqtFi5WTH

It's not a joke some people lose their lives because their children thought they played with a toy and it was a real gun !! pic.twitter.com/IBJqQrXnef

Prince George plays with a toy gun. His sister plays with her sunglasses. Nothing stereotypical about that is there ...?
More pics from the charity polo match here https://t.co/bkvEIUcKFV pic.twitter.com/XC88DuqjOG

My son has a bin of toy guns but all are bright colors and weird shapes. Those look like a pistols (not hunting) and have the orange safety tip required when a gun looks so real.

Some were torn on what Kate's role should have been, particularly if the guns were brought to the event by another child:

This was the only disappointing thing about today's polo match photos. I really don't get toy guns - why play with things you should never have to use😥
Kate alone shouldn't be blamed about this as we don't know who owns the toys, but someone should have said that this is NOT OK. https://t.co/TC8qKN1ndd

True, but when someone handed my child one, I simply said no thank you.

Others simply didn't see what all the fuss was about:

Even if children aren't allowed guns they improvise by using twigs, branches. Let them get it out of their system, though George will be taught the correct use of guns of course

I dont see a problem with Prince George playing the toy gun.. Common it's just a toy.. And he'll eventually learn to use a real one someday.. Just like his father and grandpa.. pic.twitter.com/5KFdewWo9r

I always had toy guns when I was a kid. I didn't grow up wanting a real one to kill people with.

So what now, nerf guns are going to turn kids into mass murderers???

People are not happy that Prince George was playing with a toy gun https://t.co/Y7lAH5ewUw

Read on for all the photos, then decide: is it the royal family's obligation to set a better example when it comes to potentially violence-driven toys, or is this a parenting choice that's no one's business but theirs?