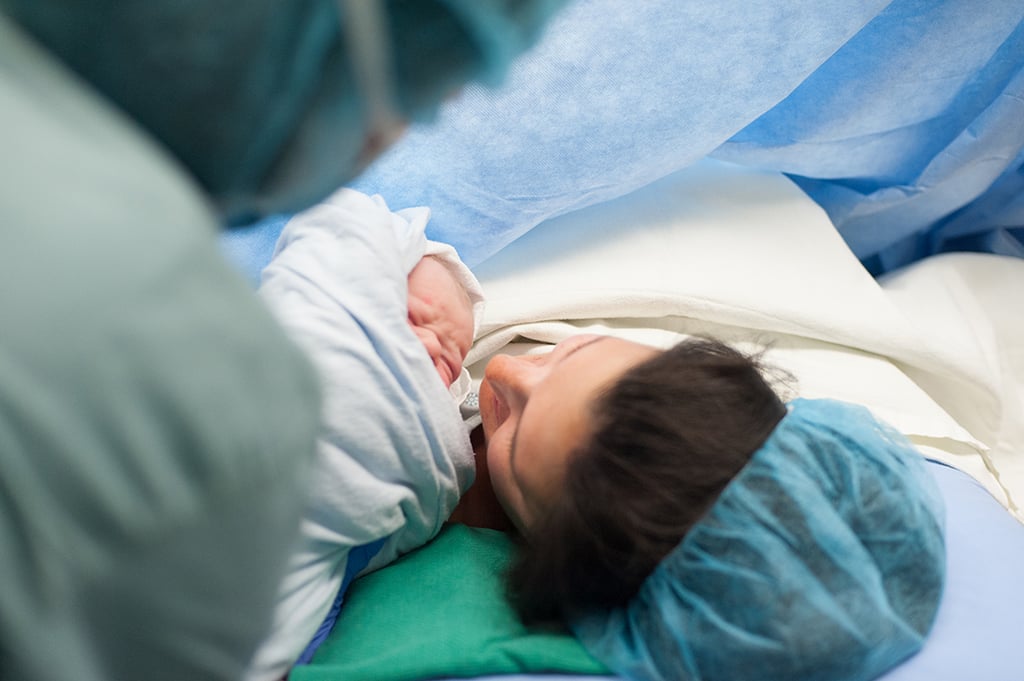 There I was after 24 hours of labor, five hours of pushing, and a C-section looking like a whale.

No really, a whale.

Like "find me an ocean and toss me in" certifiable whale. I would have fit in just perfectly with the sea creatures, which was amazing considering I had hyperemesis gravidarum in pregnancy and didn't touch maternity clothes until I was about eight months pregnant. I wore my wedding ring throughout the pregnancy, and I was never swollen once. People actually said I looked cute, and perhaps they weren't even lying. But after being pumped with fluids after my epidural and during my C-section, I now resembled Moby Dick and was so utterly not cute. One of my original legs turned into about five legs. My hands were as swollen as a beast's. I'm surprised I didn't warble or speak whale but instead could utter strings of the English language. What's worse is I'm so pale that I'm translucent, so Moby Dick and I would have been kissing whale cousins out in the deep blue.

That was just one of the yucky thoughts I had after becoming a mom. You know, I had not gained that much weight in my pregnancy due to hyperemesis, yet even I had wondered what my body would look like after delivering a child. I can assure you I was not imagining resembling ocean life.

But really, when you look like a whale and you're exhausted from labor, pushing, and then a C-section, what really took the cake for me were my boobs.

I started out before pregnancy as a double D. I ended pregnancy in the G range. The old Jewish ladies in the bra shop helped this young half-Jewish lady (me) guess at her bra size once the milk would come in. We estimated a size I.

Do you know the horrors of walking around like a hobbit because your core was just cut open as you try to hide your porn-star breasts — which at this point are "free willy" thanks to the incorrect bra guess you made — in front of your in-laws and family? And not only are they "free willy" but the rock-hard appearance thanks to the milk engorgement has you imagining how soon you could chop those suckers off and sell on eBay to some freak pervert? Sure, I was excited to nurse my daughter, and, of course, let's not even stab the bleeding nipples scenario just yet, but ladies, can you empathize with the desire to hide your Debbie Does Dallas tits so your father-in-law (ex-FIL now), other family members, and nursing staff don't have to pretend not to look?

Oh touché, my mom friends. You do know this feeling, don't you? This awkward postbirth body that you're not only somewhat horrified with, but that is also healing while you attempt to care for a baby for the first time in your life, learn how to nurse, and try to take an unsuccessful poop?

Ah, the poop. They want you to poop after giving birth whether through a C-section or vaginal delivery. And I was a good little patient. I took the meds they gave me. I promised to not be afraid of the poop. And I wasn't.

Until the middle of the night, there I was, just six hours after my C-section when my body decided to tell me: Laura, you have to poop.

In the hospital pull-out chair/lounger, there was my now ex-husband sleeping peacefully as a baby. Even the baby, who was with us in the room, was sleeping peacefully like a baby . . . but Laura had to poop. Yet Laura (I am using the third person in an attempt to distance myself from this embarrassing memory) still needed some help getting up. But the new dad was sleeping and wouldn't wake up as Moby Dick With the Giant Breasts and Disgustingly Swollen Legs and Beast Hands struggled to get out of bed. So this new mom signaled the nurses. The nurses were busy but tried to do their best. Laura struggled to get up as a tiny nugget of poop was about to erupt on her hospital bed, yet she held it by the thread of a — never mind.

That's too gross even for moms to read.

Thankfully the curse words and "Dear sweet Jesus, why is this happening to me?" plea out of my mouth woke the new dad in time, and alas, I didn't poop myself, but it was a close call, and I hope to never experience that again, not even if I'm 92 years old.

Just as the nurses came in, I announced to them, "Look — I made a poop."

And then the next day when the pooping was over and I had indeed accepted that my breasts were going to be like Mt. Everest on my breastbone for a few days, the nipple cracking and bleeding happened. With my Corvette-size maxi pads, sore incision, gigantic boobs with bleeding nipples, and beast-like whale appearance, I decided to get up and walk up and down the hallway just like the nurses suggested. This is when I saw a man who wasn't my husband, a doctor, or related to me for the first time since delivering my child.

"When is the baby due?" he asked with a big smile on his face.

I wanted to whip out my engorged breasts with their bleeding and cracked nipples out and pull up my hospital gown to show my C-section incision and tell him, "The baby is here! Wipe that smile off your face, mister!"

But I didn't. Instead, I retained my composure, hobbled back to my hospital room, and wondered why no one had told me I would assume the form of an alien after making a baby. Until I realized that had someone told me, I wouldn't be a mom, and hey, it's worth it, right?

Besides, it was kind of funny to have porn-star boobs even if no one particularly sexy got to see me that day.

Funny how motherhood works, isn't it?

Little Kids
This 5-Year-Old Gave Her Mom the Sweetest Compliment, and Her Reaction Will Melt Your Heart
by Yerin Kim 1 day ago

Parenting
This Mom Teaches Her Kids That Virginity Doesn't Exist, and Her Explanation Might Convince You, Too
by Kate Schweitzer 2 days ago

Mandy Moore
A Round of Applause For Mandy Moore, Who Was Still Filming This Is Us at 38 Weeks Pregnant
by Victoria Messina 3 days ago