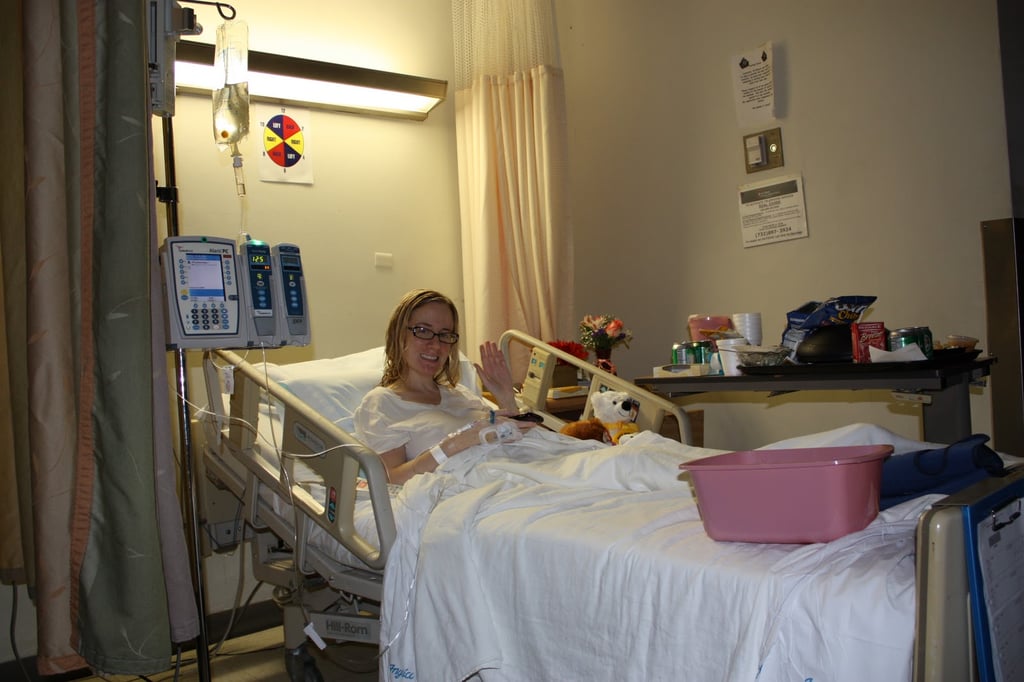 I was pregnant just five weeks when the puking began. I took it as a success sign at first; I had been pregnant just a few months before and miscarried. I figured a little puking couldn't hurt me.

Boy, was I wrong!

According to the University of Maryland School of Medicine, 90 percent of women experience some form of morning sickness — characterized as nausea and vomiting, which, by the way, doesn't necessarily mean that women feel sick just in the morning. A woman can be sick all night, they can be sick only in the afternoon, and it can even last throughout the whole pregnancy rather than just that first trimester. It's not fun but not life-threatening.

But at just five and a half weeks pregnant, the sickness went from "oh man, that smell makes me want to vomit" to a daily diet of ice cubes and ice pops in between puking. When I started to tell people how miserable I was, I got the eye roll from quite a few people.

"Oh, Laura, everyone gets morning sickness. Don't be so dramatic."

Then there was the skeptical looks from my now ex-husband when I started to say, "I can't move from the bed. The motion makes me want to vomit."

It was all "Laura being dramatic" — until, suddenly, it wasn't.

The one person who took me seriously was my ob-gyn, Dr. Lawrence VanHorn. He tried upping my dosage of oral Zofran, an antinausea drug commonly used to treat patients in chemotherapy and now a popular drug for vomiting in pregnancy. At the highest dose, it did nothing. So instead, we tried a subcutaneous pump, which distributed the Zofran through a tiny catheter I stuck in my thigh or stomach. Instead of making things better, it made me so dehydrated that I started to get double vision. It turns out the double vision was indicative of the beginnings of Wernicke's encephalopathy — something I didn't find out until later. So after a particularly vomit-rific night, when I went into the ER for the fifth time at seven weeks pregnant, my doctor said enough is enough and admitted me. 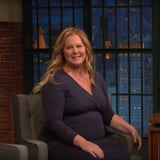 I turned to my husband at the time and said nothing. A garrulous woman, I hadn't spoken much for about three weeks.

"I'm sorry," he said, knowing now that I indeed was not being dramatic.

I had Hyperemesis gravidarum, a severe form of nausea and vomiting in pregnancy. According to the HER Foundation, the world's largest grassroots network of hyperemesis gravidarum (HG) survivors and leading site for HG information on the Internet, HG is "described as unrelenting, excessive pregnancy-related nausea and/or vomiting that prevents adequate intake of food and fluids. If severe and/or inadequately treated, it is typically associated with loss of greater than 5 percent of pre-pregnancy body weight (usually over 10%), dehydration and production of ketones, nutritional deficiencies, metabolic imbalances, [and] difficulty with daily activities."

I had each one of these signs even with medications and lost more than 12 percent of my body weight in less than a month. I looked like a "ghostly pale lollipop" — my head balancing on a rail-thin body and my face dotted with pregnancy acne. The hospital ended up putting in a PICC line in order to give me constant fluids and Zofran, but this was just the beginning of my treatment. From week seven to week 16, I was hospitalized constantly, until I finally stayed for a nice 25-day stretch, in which they removed my PICC line because I had signs of sepsis. According to the Mayo Clinic, sepsis is "a potentially life-threatening complication of an infection. Sepsis occurs when chemicals released into the bloodstream to fight an infection trigger inflammatory responses throughout the body." After dousing me with antibiotics that made the puking even more severe, we discovered that I didn't have sepsis, thank god, but just a sinus infection. Well-played pregnancy hormones, making those mucous cavities more, well, mucous and infected.

I will never forget the 5 EKGs I had, the heart monitor, and the echocardiogram, because I had a 150 heart rate while lying in bed for months on end. Why? The tachycardia was the beauty of pregnancy hormones, combined with severe nutritional imbalances and dehydration. Then there were the chest x-rays and the test for a blood clot after severe chest pains. Turns out I was fine — somewhat. The chest pains weren't indicative of a blood clot or a heart attack, but rather severe esophageal and chest pain from constant vomiting and acid reflux. It was the one time in my life where I gave up wearing bras because it hurt me to wear one. The doctors were just going to have to deal with the "free willy" look.

All I wanted was to be happily pregnant and glowing. Instead, I hated it.

All I wanted was to be happily pregnant and glowing. Instead, I hated it. As I lay in my bed on the maternity floor, I listened to screaming women in labor, and I was envious. I wanted it to be over. I cried every day, and some days, I wished to not be pregnant anymore, despite the severe depression I felt after miscarrying my first pregnancy. The only way I got through each day was listening to music on my iPod, focusing on getting through one hour at a time, and sometimes just having one bite of watermelon per hour. I became friends with the hospital staff and was a floor favorite. Despite my horrible skin and pukey demeanor, I managed to be nice and tried to enjoy the friends and family who visited me.

But the worst part was worrying that somehow my baby would not make it even though the doctors said that most likely I was suffering much more than the baby was. Each day, the nurses came to check my girl's heartbeat. I felt as if every day it was a game of "will I lose her?" There was one time when they couldn't find her heartbeat. "How could all of this have been for nothing?" I thought. My constant low blood pressure, though, was worse, so they gave me a bag of potassium, and in a few hours, there she was, her steady heartbeat reminding me that there was a reason for my suffering. That at the end of all this, there would be a beautiful little baby.

My husband at the time visited me each night in the hospital, helping me shower and cleaning out my puke bucket, and we grew severely depressed. It wasn't until I spent my 34th birthday "celebrating" in the hospital that I turned to him and said, "I know this sucks, but we are having a baby! We made it! We got past the first trimester. Let's pick out names."

We picked a girl's name right off the bat. When I googled on my phone what her name meant, this is what I saw:

I cried. I knew this would be our girl's name if she ended up being a girl, and she did. It was exactly what I wanted my baby to be: healthy, something I wasn't.

And at 16 weeks, when I left the hospital, the sickness wore on. Eventually, at 20 weeks, it calmed down, but I didn't eat much until I was seven months pregnant. On good days, I survived on cheese doodles, Ensure shakes, apple slices, and some macaroni and cheese. I actually ate worse while I was pregnant than in my whole entire life, but my doctors didn't care. If it could stay down, I could eat it. Each month, I went to a high-risk ob-gyn for growth scans, and there she was, getting bigger each time. Then there were the frequent dentist visits. After all my puking, I had earned seven cavities, but hey — I didn't lose my teeth. Some women with HG do.

And at the end, there was my 6-pound, 12-ounce happy ending: a baby girl. She had indeed been, healthy, strong, and vigorous. All those times I played "Happy Together" by The Turtles through earbuds to the womb as I lay in my hospital bed were worth it. We made it through, the two of us together.

Two and a half years later, I have made peace with what is. From time to time, I see a baby and I get sad. I remember the baby's due date, and I wish that somehow there was a cure for hyperemesis, that someone could explain to me why this happens, but as of today, no one has found a definite cause.

If you show any of the signs listed in this article, call your ob-gyn, and don't feel as if you're being dramatic. The fact is that hyperemesis gravidarum can be life-threatening. If your provider won't take your symptoms seriously, go to the HelpHer.org site to find a supportive provider. You don't have to go through this alone.