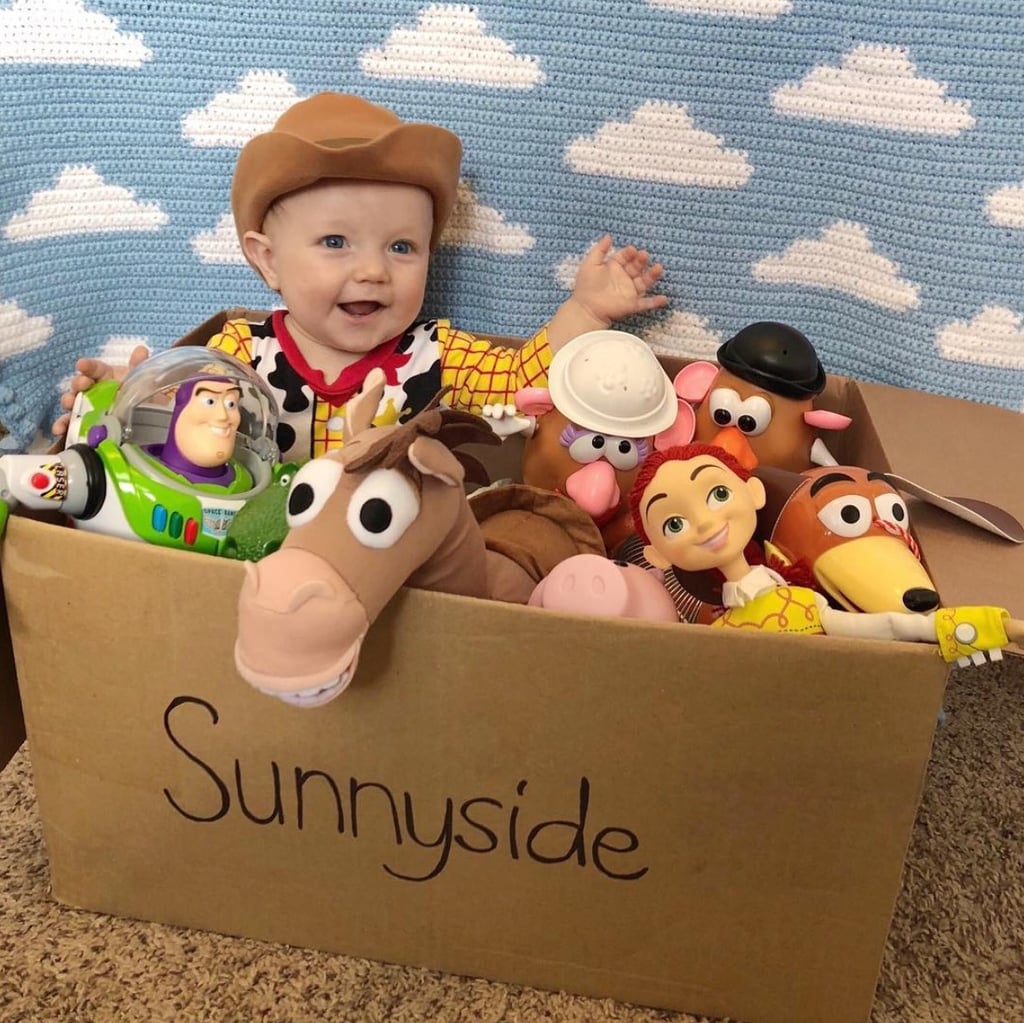 This Dad Has Dressed His Son Up in So Many Disney Costumes, It's Impossible to Pick a Favorite

Tucker Bohman has been a fan of the Toy Story movies since he was a kid, so when he and his wife found out they were having a son, it was only fitting that their gender reveal on Instagram was the film's logo with the words "Boy Story" and that at 2 days old, little Beckham, also known as "Hamm," was photographed in a Woody onesie surrounded by stuffed character toys Tucker had collected. After that, Tucker changed his Instagram handle to @ToyStoryDad and began posting a photo a week to his feed of Hamm dressed in various Disney costumes, from other Toy Story favorites such as Buzz Lightyear and Slinky Dog to Prince Charming, Olaf, and Aladdin.

"In early 2018 we took a trip to Disneyland and had Hamm dressed as Woody, and everyone at Disneyland was obsessed with him," Tucker told POPSUGAR. "We had crowds around us everywhere we went. People were asking to take his picture and talking about him throughout the park. We then had someone approach us and say, 'Hey, it's Toy Story Dad.' I couldn't believe that someone actually recognized us."

Related:
A Dad Dressed His Toddler as Slinky Dog and Connected His Niece as the Butt, and LOL, This Costume Is Perfect

"Everyone at Disneyland was obsessed with him!"

From that point on, Tucker and his wife decided to start posting Hamm's costume photos daily, which required getting creative and hand-making most of his costumes. And because the family had a yearly pass, many of Hamm's costumes made their way to Disneyland. "We seriously just love what we do," Tucker said. "It is A LOT of work designing and creating these costumes, but the joy we spread around the world makes it more than worth it."

Scroll through to see some of our favorite costumes of Hamm's, and be sure to follow Tucker on Instagram for more (starting Oct. 1, the hashtag #HammsHappyHaunts will be populated with one Disney villain costume per day in the month of October — and we can't wait to see Hamm in each one!).

Nostalgia
We Uncovered Disneyland's Chimichanga Recipe, So Who's Ready For Breakfast?
by Lauren Harano 5 days ago

Family Travel
Disneyland Introduced a New Ticket Pricing System With a Tiered Structure; Here's What You Need to Know
by Alessia Santoro 5 days ago