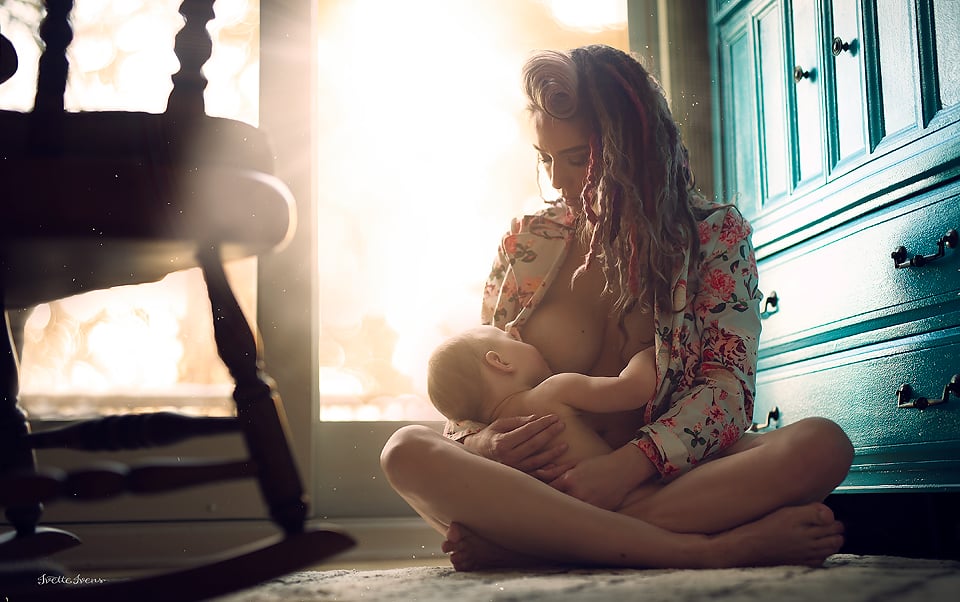 Did I have sore nipples? You betcha.

Did I struggle at first with my daughter's latch, enduring a shallow latch and in turn, bloody nipples? Yes! TMI?

Despite the tough first few weeks, I felt like a champion when I nursed. I didn't have to worry about all the parenting strategies that I do now, such as redirection, positive discipline, socialization, and more. All I had to do was be me, be present for my baby, and nurse her.

I recognize that I just easily summed up the infancy stage in three breezy words when the reality is that the first year of a child's life can be exhausting, demanding, and stressful. But for me, I felt confident. I didn't know much yet about motherhood and I wasn't always sure I was 100 percent correct, but I always knew I was responsive to my baby.

I think the truth of it was I didn't get my period until I weaned (talk about an efficient nurser) and therefore, I didn't deal with the ups and downs of my cycle. My hormones were behaving rather differently and the constant oxytocin that came from nursing was incomparable to any other experience I had had before, including love. Loving a romantic partner is amazing, especially new love, but you're not always with that person in the same way that you are your baby.

I also had the benefit of being at home with my girl. I worked, but it was very part-time and therefore, a treat unlike now in which as much as I love working, it's a more stressful lifestyle for me as a single parent. But those early days in which the formula was rather simple, just me and baby, felt so very delightful and right. It was like I lived in a bit of a bubble.

Like many other moms, I was at risk for postpartum depression because I had had hyperemesis gravidarum in pregnancy, which ups your chances, and I had a long-ago history of depression so it was possible that I could have PPD, but I was fortunate that I did not.

I spent many years growing up self-conscious or on the flip side, oversexualized by having large breasts. In fact, the other day someone suggested I get a reduction lest I wanted significant back issues as I got older. But now, my breasts were important and incredibly valued. I was in turn, valued. I was needed and what I did on a daily basis really mattered. I was growing a human being for God's sake and what could be more amazing than that?

This isn't to devalue anyone else's experience, whether it be with bottle or breast, but to say how grateful I am that I was able to nurse. How sometimes, I miss those quiet moments of me and baby on the couch, television on as she slept on me or perhaps a book in my lap as she slept and I read.

I miss the quiet times of me rocking my little one as she nursed, night after night right before she fell asleep in her crib or bassinet. I miss gently trying to pull her off me and into her little sleeping territory with the hopes that her eyes wouldn't open.

I miss how simple things once seemed when she didn't have tough questions for me like "Why don't I have a sibling?" or "Why cant you and Daddy be together?"

That nursing world, that time I had with my daughter, was in many ways a paradise for me right before the tumultuous storm of a divorce. Even had we not divorced, that time of infancy, of baby and me, are very imprinted in a golden film in my heart. I'm not lying either in some postmemory mommy haze. She, my girl, was a delightful baby and easy. Those hazy, rosy days were indeed rather wonderful. They were fatigue-ridden and stressful at times, yes. We new mothers all experience that. But it was such a joy to know that at the end of the day, there was someone who needed me in such an instinctual and primal way.

That's why I tell moms today as they deal with their sleep deprivation and cranky infants: it goes so quickly and one day, you will barely remember any of it. You think you will, but you will not.

So while you are still in the thick of infancy, be aware to take back and drink in what you have because soon, you will have it no longer.

Your babies will not be clamoring for you but running away from you and off to their friends.

In a blink, you will watch your child become an adult. We all will. So while they're still babies' mommas, hold on and enjoy their attachment a few minutes longer. Before you know it, those babies will be up and gone.

Summer Olympics 2021
Thanks to Vocal Moms, the Tokyo Olympics Will Allow Athletes to Bring Their Nursing Babies
by Karenna Meredith 3 weeks ago