After a hilarious thread about a man's stolen office lunch went viral on Twitter, new mom Ijeoma Oluo took to the platform to share her own "far less exciting experience with workplace lunchtime theft" (debatable — wait until you hear it). Upon returning to work after maternity leave "way back in the day," Ijeoma, New York Times and The Wall Street Journal bestselling author of So You Want to Talk About Race, found herself in an awkward and unfair predicament: her office was not supportive of breastfeeding moms, and her coworkers would complain that she would pump during lunch.

Ok, so that last thread reminds me of my own, far less exciting experience with workplace lunchtime theft. Imma share anyway...

This was WAY back in the day when I was working in Telecom. Not, like, cool wireless telecom. Landline telecom. This was all CAT-5 & T3's and shit. Like, half of the people who worked there were former military - because it's one of the few places you get training in landline

But I somehow got a job there & I needed it because I was 6 months pregnant.

But socially, let's just say that this wasn't a place where I fit in.

I came back to work after I had my son & pretty much stuck to myself, so lunch wasn't a social thing to me.

Especially since I was a breastfeeding mom.

This place was so NOT breastfeeding parent friendly that after complaining about how it was not acceptable for them to expect me to pump milk in the bathroom stall, they just put a curtain over the closet where they kept the bathroom cleaning supplies and were like "HERE"

So every lunch I would spend the 30 minutes on a stool, facing the corner, in a closet with nothing but a curtain to separate me from everyone walking by.

& every day ppl would like, awkwardly complain that I would be pouring out breast milk and cleaning my equipment in the breakroom. It was ruining their lunch.

As if my closet-pumping every day was the lunch of my dreams.

Although the multitweet thread starts off causing any sane person to fume over the horrible conditions and attitudes Ijeoma was exposed to in that office, the new mom was vindicated in a way no one, including her, saw coming.

And this dude Rich would complain every day about how disturbing it was. "Bodily fluids.." blah blah blah.

He was this gross conservative woman-hating asshole with a severe buzz cut.

But then one day I came out of my pumping closet & went to grab the bowl that I use for transferring my milk and cleaning my equipment was missing from my cubicle. Like, the cleaning supplies were dumped out on my desk & bowl was gone.

So I'm like, shit. I can't get this milk in the fridge & my equipment sanitized without this bowl. And I search up and down the aisles of cubicles.

And Rich is fucking eating popcorn out of it.

He's like, "Well, I didn't know it was YOUR bowl specifically." All smarmy like I'm being unreasonable.

I'm like, "Dude, you literally took it off my desk."

He says, "I use it all the time. It's no big deal. You never even noticed."

I was like, "STOP EATING OUT OF MY BREASTMILK BOWL DUDE."

And he immediately started choking on his popcorn.

He was like, "A BREASTMILK BOWL ISN'T A THING WHAT ARE YOU TALKING ABOUT."

I was like, "Dude, you see me use this bowl every single fucking day. You bitch & moan while I use this bowl to transfer my breastmilk & clean my equipment."

"AND YOU LITERALLY DUMPED MY BOTTLES AND CLEANING BRUSHES OUT OF THE BOWL IN ORDER TO USE IT."

Dude looked like he was going to die right there.

So then he's hell flustered and looks around at his teammates & is like, "Well, did you all know it was a breastmilk bowl?"

And I shit you not, everybody around him said "YUP" with shiteating grins on their faces.

So then he just handed me my bowl and stormed out and was gone for like an hour. Everybody started laughing their asses off the moment he left.

And he never touched my shit again.

Moral of the story: don't f*ck with a mom. 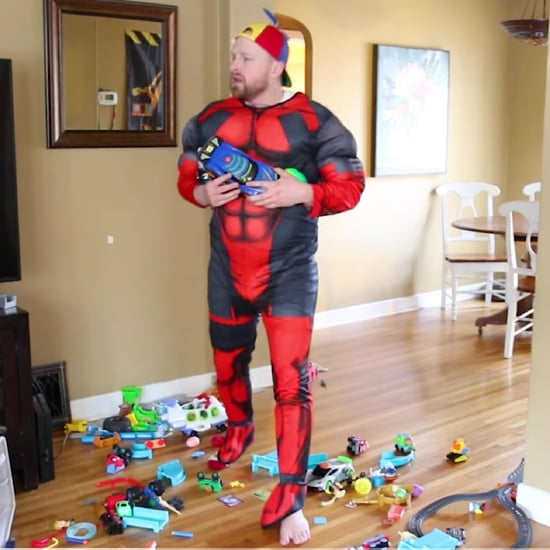 Family Life
A Comedian Made a Video Spoofing How Toddlers Act, and Yep, Windows Are Licked
by Murphy Moroney 1 week ago