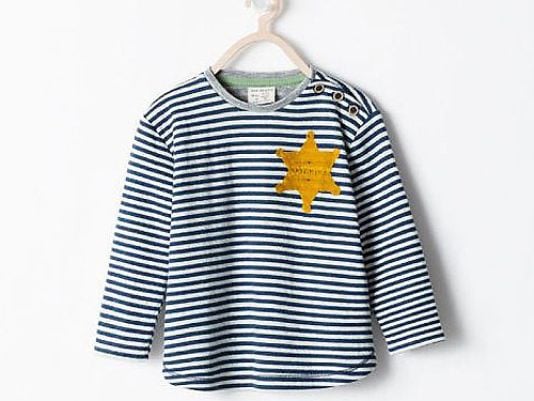 Spanish retailer Zara is known for its fun and stylish kids' clothes, but its latest design had adults around the world scratching their heads this morning. The company's toddler-sized "Sheriff T-Shirt," featuring dark stripes and a large, six-pointed yellow star over the upper-left section, is eerily reminiscent of the concentration-camp uniforms Jews were forced to wear during the Holocaust (in the Nazi camps, the stripes were vertical rather than horizontal). Though the word "sheriff" is written on the star, it is faint and virtually impossible to see.

As the public became aware of the shirt this morning, social media exploded with cries of anti-Semitism, insensitivity, and disappointment.

Who even signed off on this holocaust inspired shirt? Very disappointing, @Zara. http://t.co/rbd0KUGBXe via @timesofisrael

Following the uproar, Zara's parent company announced that it was pulling the shirts from the retailer's Albanian, French, Israeli, and Swedish online stores, where they were available, and apologized for the lapse in judgement:

"The item in question has now been removed from all Zara stores and Zara.com. The garment was inspired by the classic Western films, but we now recognize that the design could be seen as insensitive and apologize sincerely for any offense caused to our customers."

But the concentration-camp-like shirts aren't the only garments parents are finding offensive on Zara's site. Their Fall collection features a "Cowboys and Indians" theme with headdresses and more.

While the tots the clothes are intended for probably don't "get" the issues with the clothes, their parents certainly do. Do you find them offensive? Or would you buy them for your kids?