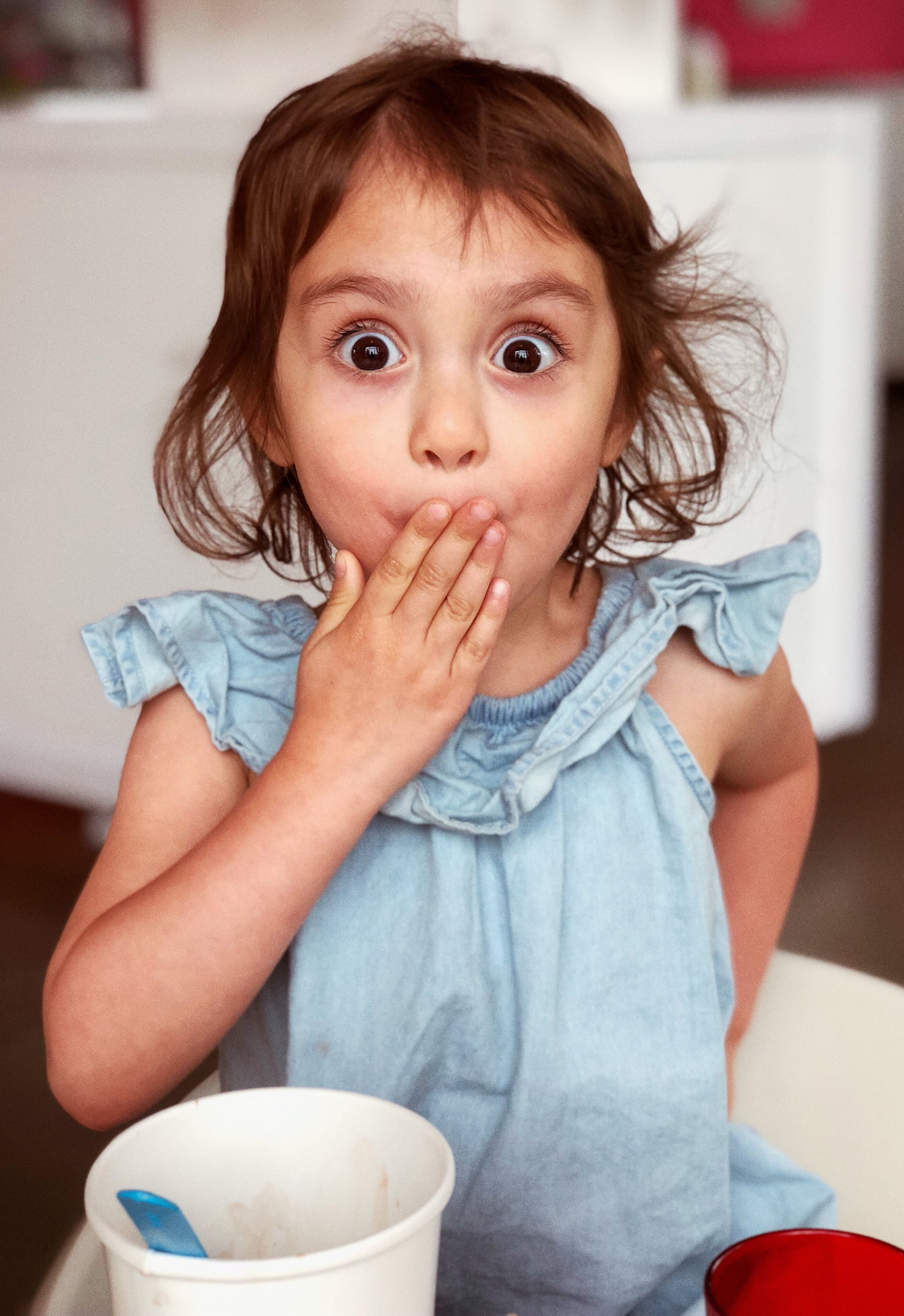 I was sitting in a tiny little coffee shop down the block from my apartment with my 4-year-old – a little excursion we'd take every so often now that she was old enough to be an enjoyable late-afternoon companion. I was sipping a latte, she was gulping some milk, and we were both sharing a muffin and chatting about our day. It was lovely. Until I noticed her gaze focusing in the entrance behind me. Before I could turn around, she said, "Wow, that lady has a huge bottom!"

Before I could turn around, she said, "Wow, that lady has a huge bottom!"

I shuddered. I looked at the woman in question, who miraculously didn't seem to have heard her. My daughter certainly said it loud enough for those seated near us to hear – I could tell by the sideways glances a few of them gave me before going back to their books and laptops.

I quickly tried to do damage control. "Honey, please don't say that," I said. "We don't talk about people's bodies."

Then, as plainly as she'd said it before, she continued: "Why not? She is very big!"

At that point, I was already shoving the half-eaten muffin in my tote bag and grabbing our jackets. I just wanted to get out of there and under the nearest rock I could find.

It was a mortifying experience, and I felt like I got off easy. The innocent stranger in question seemingly didn't hear my daughter's inappropriate comments, which were made as happily and matter of factly as if she'd seen a rainbow. But what if she had? What would I have done?

Thankfully, Dr. Frank J. Sileo, a child psychologist, had answers for me.

First, he said that such, ahem, candor isn't something to reprimand with little kids – particularly those younger than 5 years old – who are just beginning to hone their verbal skills.

"They want to share their thoughts on everything, which is what we want to encourage kids to do in terms of language development," he told POPSUGAR. "Kids in this age group aren't willfully being mean and insensitive."

Kid Comment on Someone's Race or Disability in Public? Here's How to Tackle It

What to Say to Your Child Immediately After an Inappropriate Comment

To that end, he thought it'd be best if I didn't completely shut my child down right away – even if I were profoundly embarrassed. Instead he suggested calmly correcting them in the moment.

"A parent may respond, 'People are all different shapes and sizes,'" he suggested. And if the child persists? "You could say, 'You know what? We will talk more about this at home.'"

How to Teach Your Child About Individual Differences

Then, once at home or at a place more amenable to a meaningful conversation, you can "open up a discussion of individual differences" with your child.

"Teach them how each one of us may look different and that is what makes us all special and interesting," Sileo said. "Use concrete examples. For instance, 'you are taller than your brother' or 'daddy has bigger hands than mommy.'"

He noted it was important to emphasize that people are all different without signaling anything being better or worse.

"We have to be in the moment, which often is what causes the embarrassment for the parent."

The nuances to this are certainly complicated. It might be confusing for kids – particularly those who are still unaware of any negative connotations surrounding body image – to be told to never comment on a person's appearance, yet it's socially acceptable to tell someone you like their curly hair or that their hazel eyes are beautiful. To help compartmentalize, Sileo recommended telling your child that it's simply not nice to make comments specifically about people's weight at all, at either end of the spectrum. If they're old enough to understand physical differences and disabilities, that is another boundary line parents can give their kids.

Above all, don't shame little ones for statements that, even if offensive, weren't maliciously intended. "We want to compliment our child about noticing, being curious, and making observations, but explain that it is impolite to make a negative comment about anyone's appearance," Sileo said. "Talk more about hurting other's feelings and explain empathy."

What to Say to the Subject of Your Child's Inappropriate Comment

Sileo told POPSUGAR that, generally, people tend to be quite forgiving of little kids, so in a similar situation, if the subject of the statement heard, there's a script I can follow.

"You could say to the person who may be insulted: 'I'm sorry. My child is at that stage where she is becoming more aware of how we all look different and about appearances.'"

Then, assure them you and your child will continue to have conversations about this.

Related:
You Should Be Talking to Kids About Race Earlier Than You Think — Here's How to Navigate the Discussion

How to Prevent These Embarrassing Moments From Happening

For better and sometimes worse, there's simply no way to keep kids from saying what's on their mind. And, as they enter their communities and experience more people – including those with disabilities or those of different races and orientations, it's likely they'll have more "uncomfortable" questions.

"We can't say to kids, 'So when we go out to the store, don't make any comments about anyone's differences,'" Sileo said. "We have to be in the moment, which often is what causes the embarrassment for the parent. We can't possibly cover all uncomfortable scenarios before they happen."

So, although I won't go canceling any coffee shop excursions with my inquisitive daughter, I'll definitely now be more prepared.