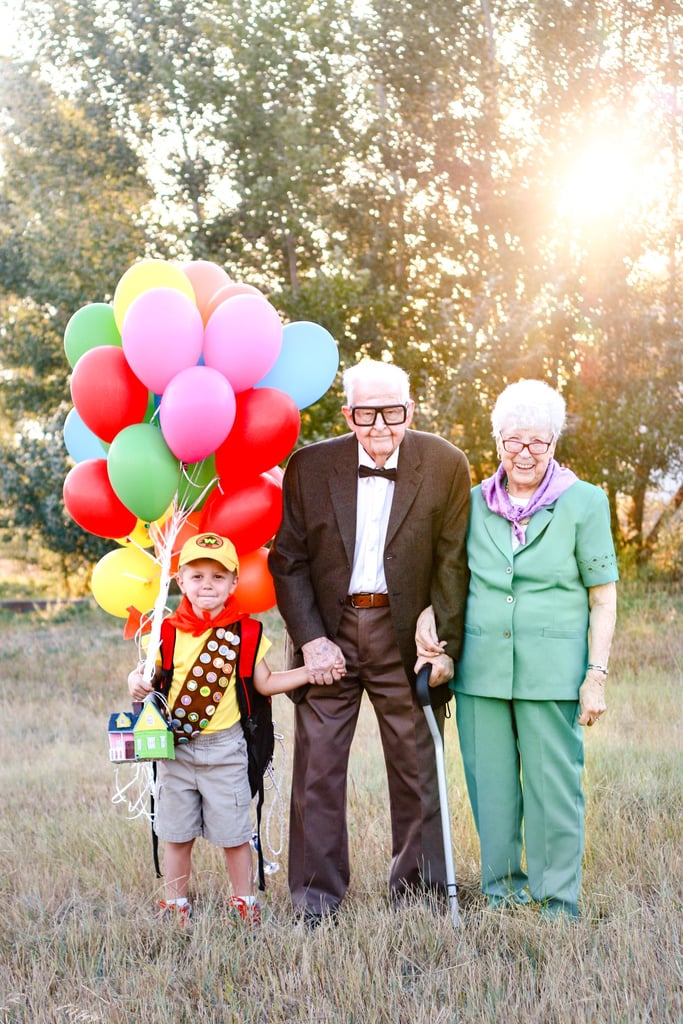 When photographer Rachel Perman asked her 5-year-old twins what themes they wanted for their birthday photo shoots, her son Elijah didn't hesitate in choosing his favorite movie, Disney Pixar's Up. After his 90-year-old great-grandpa Richard Bain heard about the shoot, he decided to step in as the Carl to Elijah's Russell, and the photos are heart-meltingly adorable. "My son is obsessed with Up, so it seemed like a sweet idea to get my grandparents involved with the process," Rachel said. "Elijah is borderline addicted to Up and has been for several years. It's the only thing he draws and colors, the only books he wants to get at the library, and the only toy he wanted when we were in Disney World last year . . . He loves Up."

"It's a celebration for me and them!"

Just when it seemed like things couldn't get any sweeter, Elijah's 90-year-old great-grandma Caroline showed up to join her husband and great-grandson dressed as Ellie, making it a special moment for the whole family. "I chose to do magical shoots for my twins this year because, five years ago, I was diagnosed with cancer right after my twins were born and had fears if I would even get to see their fifth birthday," the Colorado mom-of-three said. "My oldest was 5 at the time, and I hated not knowing if I would get the same time with them that I got with her. So, for their fifth birthday, I wanted to celebrate the things they love with photos! It's a celebration for me and them!"

Elijah's twin sister Emilee went for a mystical princess theme for her birthday photo shoot, which included a puffy pink dress, matching flowers, and a white horse with a unicorn horn. "The kids loved the shoots!" Rachel added. "They see me leave frequently to take other people's photos so they were excited to do something special . . . It's been fun to see how many people are touched by it! I keep telling the kids, 'You are good at bringing happiness to us, now you are making the nation happy, too!'" So sweet! Keep scrolling to see more of Elijah and Emilee's absolutely magical birthday photo shoots.

Related:
This Toddler Walked Right Into a Pond in the Middle of His Family Photo Shoot, and I Can't Stop Cackling
Previous Next Start Slideshow
Little KidsPixarPhotographyUp Movie