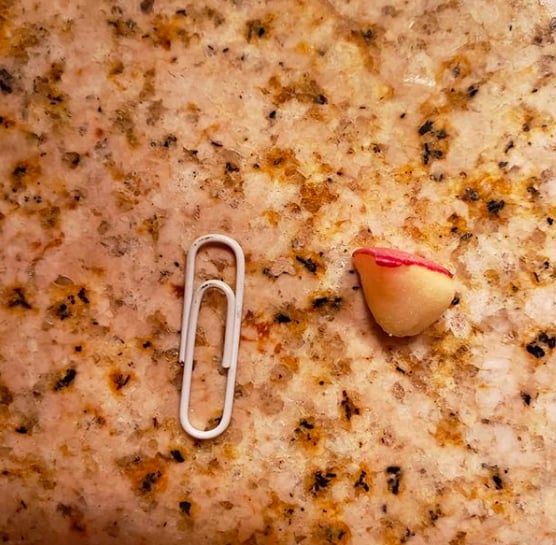 Courtney Patterson-Manfredi, a mother of two from Wichita, KS, recently detailed the terrifying experience she had when her 8-month-old son Stelio began to choke on an apple slice. Home alone with the kids, Courtney had to rely on the basic CPR training she received when she became a parent. Now, she's imploring parents to make sure they take the proper classes they need on the subject.

"Tonight, Giselle was playing outside as [my wife] Mia was on her way home, per usual. At 4:55 p.m., I messaged Mia that I was going to get Giselle's bed ready for bedtime tonight," she explained. "I was in the kitchen with Stelio, giving him a large apple slice as he played in the open fridge door. I had my back turned away doing dishes when I heard him struggling to cough something up."

Related:
Did You Know You Should Have Been Cutting Grapes Like This the Whole Time?

Courtney's mom instincts instantly kicked in. "I immediately turned to him sweeping him off the floor and patting him on the back. I could see that was not clearing his airway," she explained. "I put him on my knee and started back blows. I knew not to finger sweep his mouth for the fear of further lodging the object in his airway."

Frantic for help and unable to find her phone in the moment, Courtney dashed outside with Stelio in her arms and told her daughter to run to get their neighbor — who's a nurse — as she continued to give her son back blows.

"No advanced practice nursing, Heimlich maneuver video, or CPR class prepares you for the trauma of doing it on your own child. I am still in shock."

"She was too afraid to go get anyone. I could see Stelio foaming at the mouth and large amounts of snot coming from his nose as I had him on his stomach in my arms," said Courtney. "I found my phone and called 911 at 5:01 p.m. It rang five times as I continued hard back blows. I dislodged this tiny piece of apple from his throat. I panicked and hung up on 911 before they answered."

Although those few minutes felt like an eternity, Courtney is now encouraging other parents to get safety training in case they ever find themselves in this situation.

"This all happened in what felt like 10 minutes but was two minutes. I burst into tears, Stelio was wide-eyed and calm, staring at me. Giselle was now inside scared and tearful. I have never been so scared in my life," she said, adding that: "No advanced practice nursing, Heimlich maneuver video, or CPR class prepares you for the trauma of doing it on your own child. I am still in shock. I feel guilty. I feel thankful for my training. I feel horrible of how scary this was for Stelio and Giselle. Please YouTube CPR and Heimlich or go take a class. You never think this will happen to you or your little. I hope it never does."

Interested in signing up for a CPR or first-aid class? Head to the American Red Cross website to check out the offerings in your area. You can also check out this online tutorial if you need a refresher on the basics.