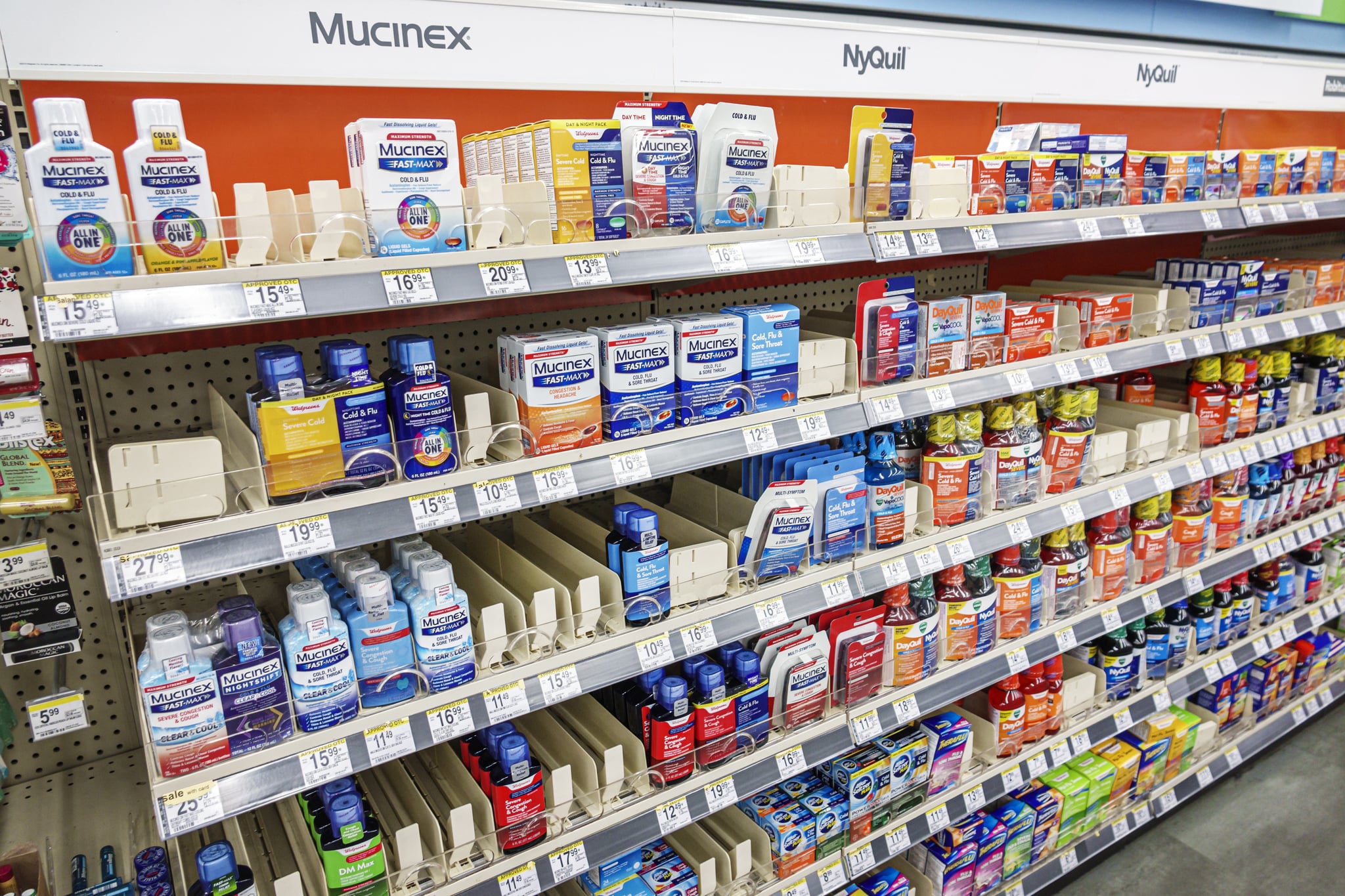 It took me six months to get pregnant with my third child, and it couldn't have come soon enough. I had a second-trimester miscarriage with twins beforehand, and while you can't replace what you've lost, my husband and I knew that we really wanted to expand our family. So when a friend recommended that we try Mucinex to get pregnant after months of trying, I decided to give it a go.

My friend Sarah — who swears this is how she got pregnant with her second child — explained it to me this way: you take Mucinex while you're ovulating because the medication thins out your cervical mucus and makes it easier for your partner's sperm to reach your egg. I figured it couldn't hurt (and we had some at home anyway), so I took a swig one morning when I knew I was ovulating. Two weeks later, I had a positive pregnancy test.

Apparently Sarah and I aren't the only ones who have tried this. TikTok user Areashia Bailey just went viral after extolling the virtues of using Mucinex to get pregnant. In the post, Bailey advises people to take a test to see when they're ovulating and then "start Mucinex and having sex 10-15 minutes after taking it." She then suggests doing this for seven days in a row. "Wait 2 weeks after the 7th day to test for pregnancy," she writes.

Plenty of people shared in the comments that this hack helped them conceive. "My Mucinex baby will be here next week 🥰," one wrote in the comments. "I started taking it last month on ovulation and I just got my positive after trying for over a year!!!" another said.

Someone else chimed in with this: "Any medication that thins mucus will work! I have two Robitussin babies 🥰."

It seems completely random, but plenty of people swear by this fertility trick. (To be fair: I'm not sure what to think about my own experience — it's 100 percent possible it was just a total coincidence.)

So is this legitimate? Can taking Mucinex when you ovulate increase your odds of getting pregnant? Doctors break it down.

Mucinex is a medication that's designed to help with a cough and congestion. While there are different types of Mucinex, the company's website says its products typically contain one or both of the following ingredients.

The ingredient in question for fertility is guaifenesin, according to Jamie Alan, PhD, associate professor of pharmacology and toxicology at Michigan State University. The exact way it works on the body is "unclear," she says, adding that "it does appear to thin mucus."

Can Mucinex Help You Get Pregnant?

Let's start at the beginning: Mucinex is designed to treat cold and flu symptoms, and there's nothing in the packaging or directions that says you should take this to help you get pregnant.

"Reckitt is aware of discussions surrounding Mucinex and fertility. As a global leader in health and hygiene, we wish to clarify that Mucinex should only be used as intended and in line with usage instructions," Andrea Riepe, global head of issue and crisis management for Reckitt, Mucinex's parent company, tells POPSUGAR.

Experts say that Mucinex could help thin your cervical mucus, but there's just zero data to support it. "There are anecdotal reports that it can help you get pregnant, but the science isn't there to back it up," women's health expert Jennifer Wider, MD, says.

Mary Jane Minkin, MD, a clinical professor of obstetrics and gynecology and reproductive sciences at Yale School of Medicine, says that this is "not new," noting that some people have been trying medications with guaifenesin (which includes Robitussin) to help them get pregnant "for at least 20 years."

"It is very possible that the women who got pregnant while taking Mucinex would have gotten pregnant even if they hadn't taken the medication."

But Alex Robles, MD, a reproductive endocrinologist with Columbia University Fertility Center, says he's actually used this trick with patients experiencing infertility — just in a slightly different way. "In the reproductive world, we occasionally use Mucinex to help clear out any mucus that might be present inside the uterine lining before an embryo transfer," he says.

During an embryo transfer cycle, patients are given an ultrasound several times to ensure that the uterine lining is growing well and appears normal, Dr. Robles explains. In rare situations, some patients develop fluid or mucus in the lining. "Often, it resolves on its own with time," he says. "If it doesn't, we occasionally try Mucinex to help clear it up."

But, Dr. Robles adds, "evidence to support this approach is lacking." He also includes this important disclaimer: "It is very possible that the women who got pregnant while taking Mucinex would have gotten pregnant even if they hadn't taken the medication." Dr. Wider agrees. It's "definitely possible" that people who took Mucinex and got pregnant experienced a coincidence, she says. "If it does increase the odds of getting pregnant, the thin cervical mucus is only one step of many that result in a pregnancy," Dr. Wider adds.

Are There Risks to Taking Mucinex When You're Not Sick?

Riepe emphasizes that the most common active ingredient in Mucinex products (guaifenesin) is "indicated to help loosen phlegm (mucus) and thin bronchial secretions to rid the bronchial passageways of bothersome mucus and make coughs more productive. Taking Mucinex for infertility constitutes off-label use."

She also cautions that people should be sure take all of Mucinex's ingredients into account before engaging in off-label use. Mucinex-D, for example, contains pseudoephedrine, a nasal decongestant which should only be used for approved indications. When in doubt about the ingredients in your specific Mucinex, talk to a healthcare provider first, Riepe says.

In general, however, doctors say you're probably fine to take Mucinex when you're not sick. "There aren't many side effects," Dr. Alan points out. You'll just need to stick with the recommended dosing. "If you take too much Mucinex, you might develop side effects such as an upset stomach," Dr. Robles says, adding that "some people may also experience drowsiness, headache, or dizziness." If you experience any concerning side effects, contact your health provider.

Are There Risks to Taking Mucinex When You're Already Pregnant?

Taking Mucinex when you're already pregnant isn't advised during all trimesters. In fact, it's advised by some experts to avoid taking guaifenesin (and other ingredients in Mucinex) during pregnancy, particularly in the first trimester. So it may be beneficial to have a conversation with your provider about trying out the Mucinex hack if you are trying to get pregnant or think you might be pregnant.

What Are More Natural Ways to Help Improve Fertility?

If you want to try out the Mucinex hack, doctors say you're probably fine to do so. But if you'd rather go a more natural route, Robles recommends doing the following:

Using an ovulation tracker and trying to time when you have sex to when you're ovulating can also help, Dr. Wider says.

If you've been trying to conceive and you're not getting the results you'd hoped for, the American College of Obstetricians and Gynecologists (ACOG) recommends checking in with your doctor for an evaluation after a year if you're under 35 and after six months if you're 35 to 39. If you're 40 and up, ACOG suggests consulting with your doctor sooner rather than later.