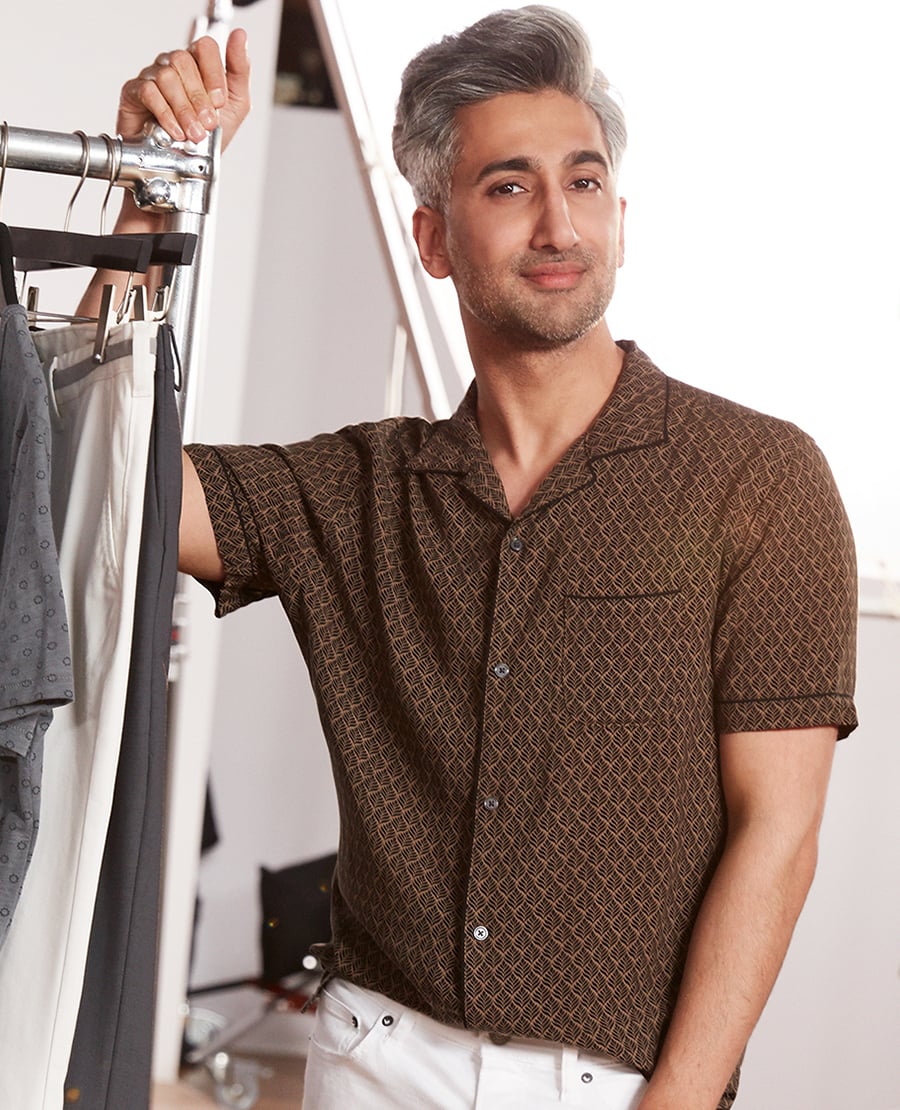 Tan France has always known he wanted to be a father, but if it weren't for the unforeseen work hiatus as a result of the coronavirus, there's no way he'd be about to have a baby in just a few short months.

"I don't remember a time before wanting to be a parent," he told POPSUGAR. "But we would probably have had to wait until I'm done with Queer Eye and I'm done in entertainment before going down that road. And there are so many horrible things that happened last year for so many people, but for me, there was a silver lining and that was that I was afforded time to be able to start my family."

Although he and husband Rob France are set to welcome their first baby boy via surrogate this summer, Tan said he's also eager to welcome back bits of his pre-pandemic life. "I'm back at work now, thank gosh, and aren't we just sick of sweats and being in the same thing day in, day out?" he said. "It's nice to feel alive again."

To that end, Tan has partnered with Express to launch its first-ever TikTok challenge, #ExpressReentry, which encourages people to share the outfits they're excited to wear as they "re-enter" their daily lives. Tan will be dropping comments on his favorite videos, which, he said, will have nothing to do with fashion trends or expensive "it" items. "I couldn't care less about that," he said. "I think all of us have felt a bit low over the last year, so it's a reminder that the small things, like putting on clothes that make you feel good, can have an impact."

Having a baby, he recognizes, however, is no small thing. Here's what Tan revealed about how his plans for fatherhood and how important the Fab Five and the French tuck are to his growing family.

On how a baby will change the Queer Eye dynamic . . .

"I'm so close with the cast. We are like siblings at this point – we've been through so much together, and so I can't see it doing anything other than bringing us closer together. I think it's going to make us stronger. I really do.

Karamo [Brown] has one biological son and one adopted son, but he didn't get them until both were past 10 years old, so I'm the only one who will have an actual baby! Next season, if we shoot another season of Queer Eye, I will have a baby on set. And I think that will really encourage the guys to love on him and then want to be his uncle. Just knowing how excited they all are – they're already saying what they want to get him and how they want to spoil him. Even now that we've been back on set for a month, when we talk about him, all of us get a little bit emotional about me having a baby and what he might be like. And that's really sweet and reassuring."

On who from the Fab Five will make the best babysitter . . .

"That's hard, but I will say this. Bobby [Berk] is the most diligent of us all. Bobby is the most Type A, so I know that if Bobby's watching our son, my son will be fed on time, he will know what time the nap is meant to happen, and he will make sure it happens. Bobby's incredibly diligent."

On his plans to be a strict, traditional parent . . .

"I want to raise my children in a very South Asian way, and we're a little more strict than Western parents are with their children. They eat at the dinner table, with the family – they don't go somewhere elsewhere for dinner. We don't do sleepovers at the other people's houses. We're going to be quite strict parents.

The way to connect with culture is through language and food, so those two things will be ever-present in our home. We want them to know two languages. The majority of the first few years, they will have my language, Hindi, and English from their white father, Rob, in the home. And then the majority of the TV they will watch will be Bollywood, which will be Hindi. I want them to understand my culture very well and be able to speak to my elders and my family. And a lot of my family, they don't speak English as their first language. So those things are really important to me."

On baby fashion and the art of the infant French tuck . . .

"The French tuck, as far I'm concerned, it works for everyone, any generation. So, yes, the French tuck will be ever-present. And then as far as what my baby's going to be in . . . I'm not one of those people who gets excited about dressing their kid up in fancy outfits as if they're an adult. I have no desire, not until at least they're a toddler. When they're an actual baby, I don't want jeans, I don't want sweaters, I don't want complicated shoes. That kid is going to poop constantly and puke constantly without a doubt. They're going to make a mess. And so it makes no sense to me that parents put them up in these elaborate clothes. I want him in onesies. I want to make it as easy as possible for myself and my husband to change his nappies. I'm not purchasing anything that's more complicated than a onesie.

"We are in a situation where there are two fathers. It's not like we're a straight couple where – and this is going to sound archaic, but is sadly often a fact – most men assume that the woman's going to take care of the baby, and so the woman, the mum, is usually the one who has to sacrifice showers and doing her hair and putting on clothes that make her feel nice. We don't have that. There's two men who are equal partners in this. And nobody gets to be the 'the babysitter' here. We are both the parents. I would like to believe that we will do all we can to still feel good about ourselves and build up our self-esteem by trading off. Say, 'OK, I'm going to go shower and put some clothes on now, and then you can go shower." And we shouldn't have to neglect ourselves. I would like to believe that parents who feel good about themselves and are able to take care of themselves can do a good job of taking care of their kids."

Show me your re-entry style! Check out the rules, use my sound + @express #ExpressReentry #ExpressContest to see how you can win a $500 gift card!