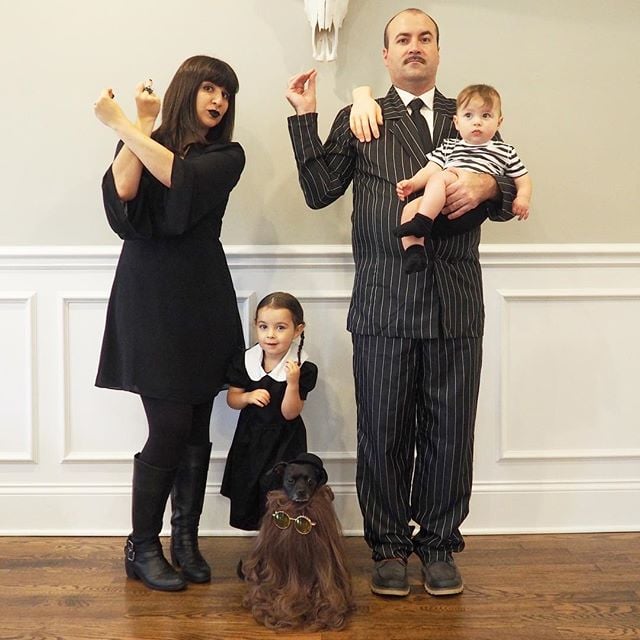 Considering a Family Halloween Costume? I Do Them Every Year, and This Is What You Need to Know

Come Halloween, when people find out that I'm one of "those moms" who gets her entire family to coordinate semi-elaborate costumes for a group concept, I get a few different visceral reactions:

And I get why a quick scan of my family's group costumes over the past several years would elicit a mix of astonishment, envy, and even a little contempt. They're what millennials refer to as "extra," and most parents can agree that's often a foolish enterprise when little kids are involved.

But I love doing it, and with the right attitude (and some well-managed expectations), I bet you and your family will love it, too.

First off, let me introduce myself. I'm the one in that photo up top with the black dress. Yep, Morticia Addams.

I get why a quick scan of my family's group costumes over the past several years would elicit a mix of astonishment, envy, and even a little contempt. They're what millennials refer to as "extra."

I've always loved Halloween — candy-obsessed from an early age, the idea of being able to score a giant pillowcase of Skittles and individually wrapped Twizzlers free of charge (and with my parents' permission) was mind-boggling. I dressed the part and had an annual sugar haul to show for it. Like most kids, though, I gave up costumes in my teen years and in college. But in my mid-20s, a roommate with a penchant for themed parties got me hooked again. It wasn't, however, until having a baby did the idea of a group costume come to mind.

In fact, I at first only planned to pull together a duo costume for my baby and pet dog, named Moose. I'd thought to myself how cute it'd be to do a Rocky & Bullwinkle pairing with my daughter as a flying squirrel and my aptly named dog as a miniature moose. It was an afterthought that my husband and I decided to portray the villains, Boris and Natasha, for a neighbor's kid-friendly Halloween party.

Related:
28 Family Costume Ideas So Good, Everyone Will Want to Dress Up This Halloween

I won't lie: the adulation we received over my husband's mustache-and-fedora combo and my daughter's handmade squirrel onesie got to my head a little. In that moment, I knew we'd have to go for it the next year.

Still, I never intended our family costumes to become an annual, must-see tradition (not exaggerating: I now have random relatives texting me in July if I've chosen our group costume yet). In fact, I assumed after our tantrum-heavy second year, in which my little Dorothy nearly refused to wear her ruby slippers, we'd call it quits. Or that we'd have to retire after year three, in which our Addams Family alter egos set the bar so high that I knew no future costume idea would live up to it.

It seems, though, that we just might be group-costume lifers: my kiddo flatly assumes we all dress up and expressed serious disappointment when I suggested just she and her little sister would wear costumes this season.

So here we are, entering our fifth year with no signs of stopping. And over the course of these past several Halloweens, I've learned a lot about what it takes to commit to something like this. It's not for everyone, but it's beyond worth it for our clan.

If you are at all considering embarking on a family costume, here's what I've learned.