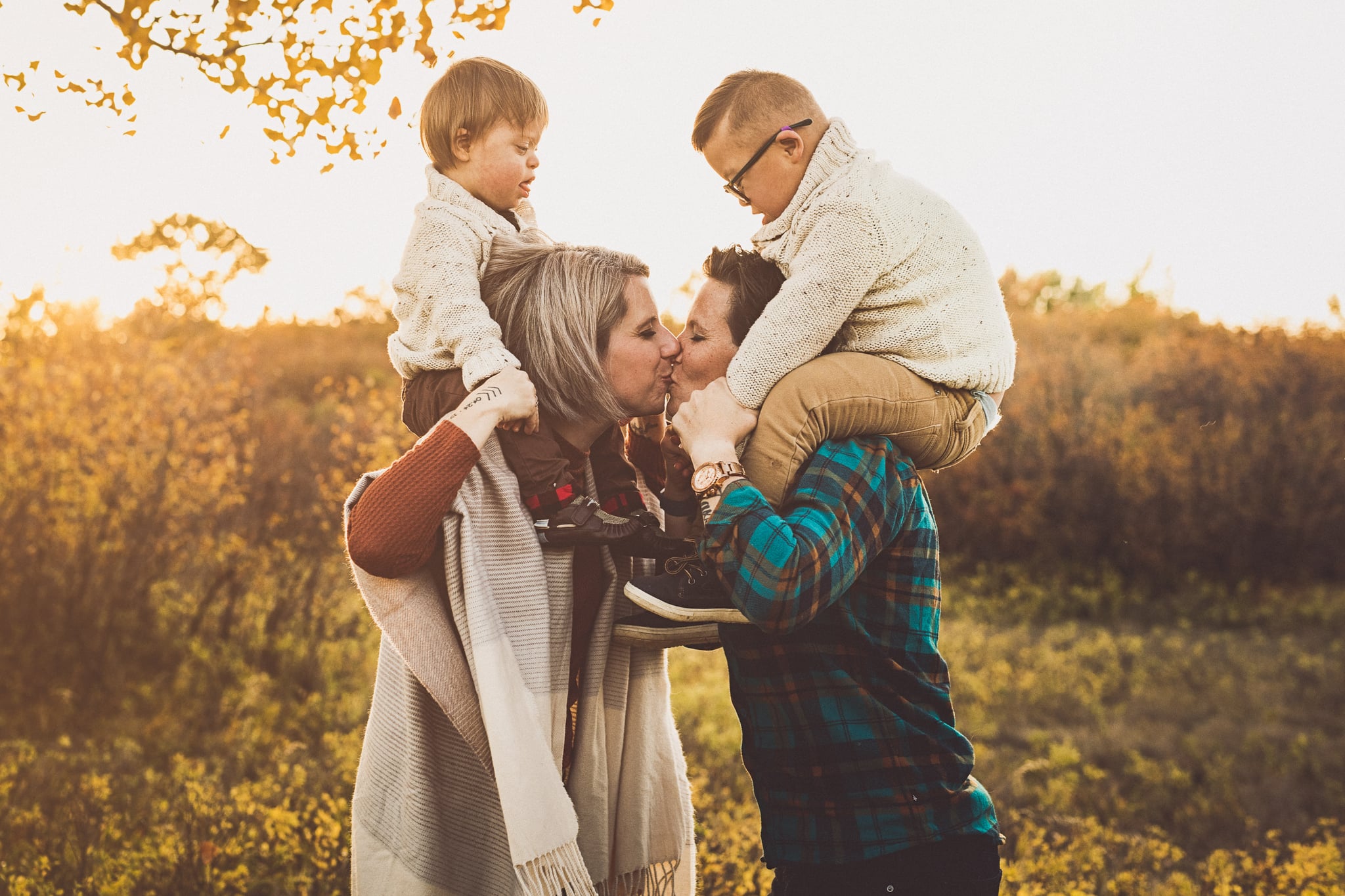 For Holly Graham and her wife, Alex, adopting a child with Down syndrome was something that always simmered in the back of their minds. Passionate about kids with special needs, the couple formally adopted Jaxson (aka Jax) on June 6, 2014, then adopted his brother, Niko, on Jan. 30, 2018. After creating a family Instagram account called Down with Jax and Niko, the couple are spreading their parenting knowledge to their 62,000 followers. We spoke with Holly and Alex to learn about their adoption journey, as well as what life is like with their 5- and 2-year-old sons.

"We kind of tackled having children two ways at once," Holly told POPSUGAR. "We were trying to get pregnant with a sperm donor and were pursuing adoption at the same time. We had always known that we wanted to adopt at least one child with Down syndrome, that was something that was always very near and dear to us. When we pursued adoption, the only thing we checked off was that we wanted a child with Down syndrome. We didn't want a typical child. We didn't need a blond-haired, blue-eyed child."

Holly had always known she wanted to parent a child with Down syndrome. Her desire stemmed from a friendship she fostered with her neighbor, Mandy, at a young age.

"Growing up, I had a neighbor who was a couple years older than me who had Down syndrome," Holly said. "I just loved everything about her. She was pure magic. I became good friends with her from when I was 5 years old. At 7 years old, I even told my mom that I was going to adopt a child just like Mandy. Ever since I was a kid, I knew I would raise a child with Down syndrome."

"Once we got further along in the process, we realized we couldn't imagine adopting another child without Down syndrome."

Although Alex was well aware of her wife's goal, she wasn't sure how they could make adopting a child with special needs work initially. "When Holly and I first started dating, she had mentioned a few times that she wanted to adopt a child with Down syndrome," she said. "At first, I just brushed her off. It didn't seem like something that was super feasible in my mind. I would just say, 'Yeah, maybe when we're older.'"

But everything changed when Alex went to firefighter school in Texas in 2013. One day, her instructor pulled her aside to tell her about his lieutenant's little girl, who had Down syndrome and was also nonverbal and diabetic. The girl had gone into diabetic shock, but due to her autism diagnosis, she wasn't able to communicate it to her parents.

Thinking on their feet, Alex and her squad decided to help raise money for a service dog that the little girl could use to alert those around her when her blood sugar was low. And given the $20,000 price tag, some serious fundraising was in order. They raised $6,000, and when she met the family to give them the money, she instantly knew that adopting a child with Down syndrome was something she had to do.

"Their relationship was just beautiful," gushed Alex. "I called Holly that night and I said, 'OK, we can definitely adopt a child with Down syndrome.'"

Once Holly and Alex got the ball rolling with the adoption process, they were surprised at how quickly everything moved. Given the fact that they preferred to take in a child with special needs, they got Jaxson sooner than they thought.

"Jaxson's adoption was insanely quick," Holly said. "By the end of May, we weren't officially on the adoption list yet, but we had gone through all the steps. We were in Las Vegas on vacation and we got a call from our agency saying, 'Hey, we have a baby for you, when can you get home?' We got on the next plane home and drove to Calgary, Canada, to meet Jaxson the following day. It was the most terrifying experience ever. We had a 24-hour notice." 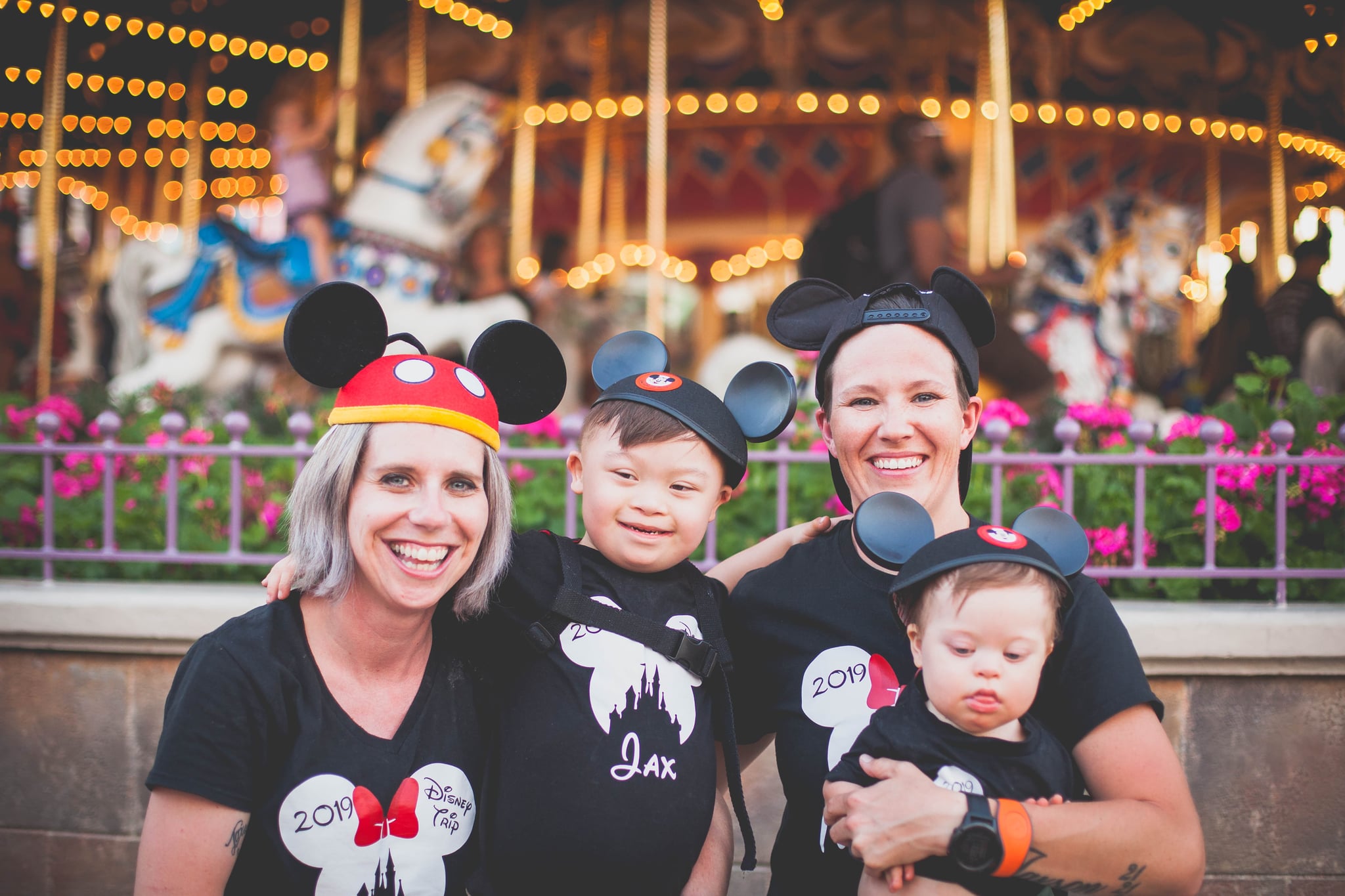 But adopting a child with Down syndrome is understandably a tall order. Holly and Alex knew that their lives were going to change significantly once they brought a little one with special needs into their lives.

"We definitely knew that it was going to be a big undertaking financially," Alex said. "We also both worked full-time and we were making pretty good money, but we weren't super concerned in the beginning. Once we adopted Jaxson, we realized pretty quickly with all his medical needs how expensive it could become. We went down to one income and had a ton of expenses. It was eye-opening."

Despite Jaxson's medical setbacks — he needed heart surgery as a baby and was also on oxygen — Holly and Alex embraced their roles as parents, especially given their backgrounds as a paramedic and a firefighter. "We fell into parenthood really easily," Holly said. "We brought him home and it was just easy and natural. He was just so lovable."

Completely in love with their oldest son, Alex and Holly began considering adopting another child just a year after welcoming Jaxson into their home. "For our second adoption, we had said we were open to adopting a child with Down syndrome or a neurotypical child," Holly explained. "But once we got further along in the process, we realized we couldn't imagine adopting another child without Down syndrome. We got the call for Niko a month later and he had Down syndrome. We knew it was meant to be."

Now, Alex and Holly are soaking up every bit of their family life. And while their boys get along, having two little ones under 5 isn't always easy. "There's a lot of love, but our oldest son, Jax, is a bull, and we call Niko the china shop," Alex joked. "Jaxson is not super gentle with the baby, but it's a work in progress. He's always looking out for his younger brother. It's pretty cute."

As for people who are considering adopting a child with Down syndrome? Alex and Holly have some important advice that prospective parents should take to heart.

"Research the different medical issues that can come with Down syndrome just to mentally prepare for those bumps in the road that happen," Holly said. "Otherwise, my best piece of advice is to just go for it."

Alex agreed, adding that having friends who also have children with Down syndrome can help during the difficult times. "We happen to have a lot of friends who have children with Down syndrome who say to just stick through it," she said. "Once you're out of that portion of life when you're in the hospital, it's so worth every moment. It will look like a blip on the radar. You'll look back on it and smile."