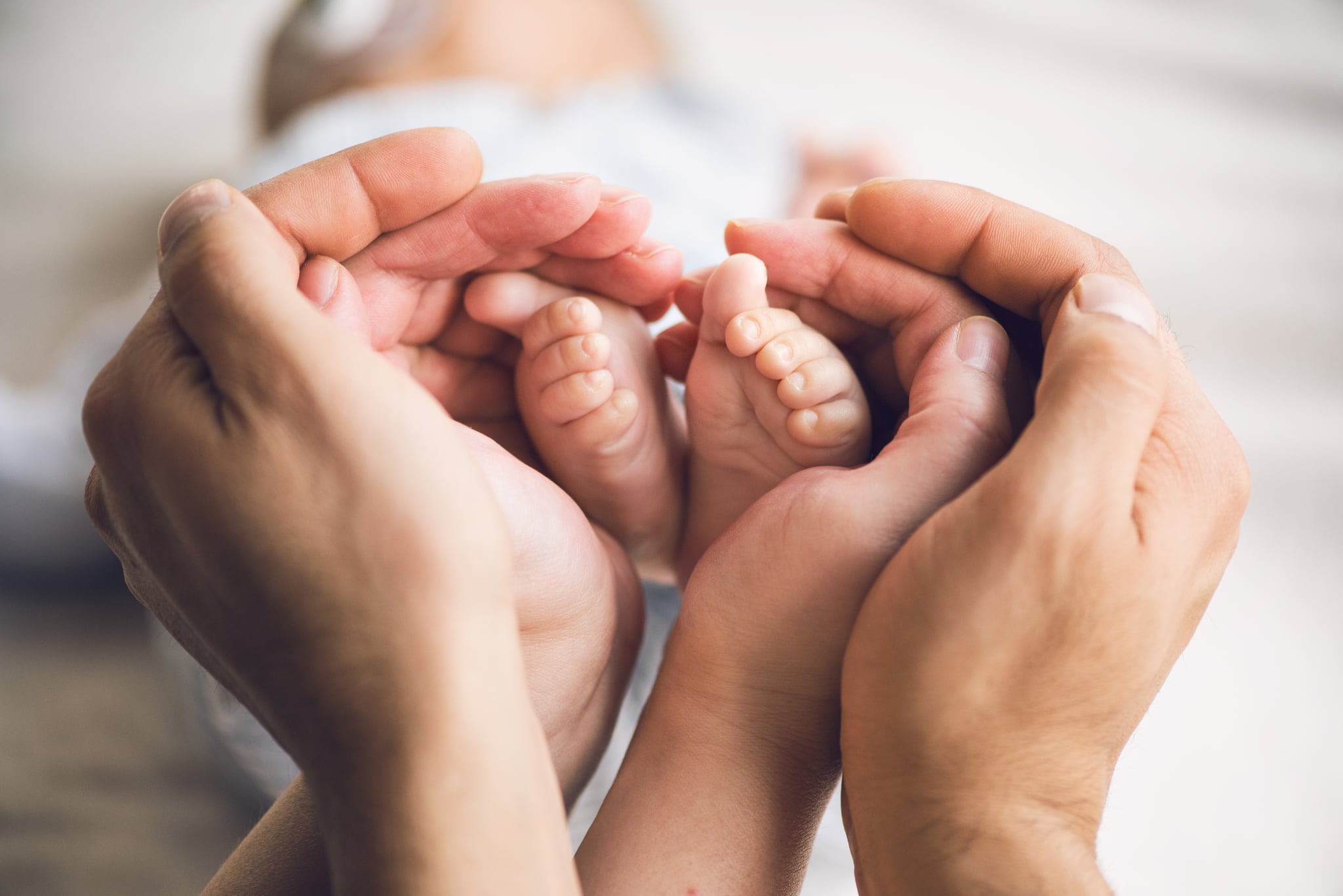 Long before I even met the guy who I would go on to marry and have my daughter with, I pictured what my labor and delivery experience would be like. The scene varied. Sometimes I was in a birthing tub with my husband, Brad Pitt, holding a cool cloth to my forehead. Sometimes I was conquering natural birth, breathing through the pain like a champ (haha!). Other times I was gazing into the sleepy eyes of my baby after hours of exhausting labor, thinking, "Wow, that was worth it." One thing never changed about those visions though, and that was the presence of my mom.

My mom and I are super close. We have very few boundaries, something my therapist keeps telling me I need to work on because it's "unhealthy," but it works for us. Because of that closeness, I just always assumed she would be in the room when my babies were born.

I never considered that my husband — who, spoiler alert, is not Brad Pitt — might not be into the idea. When I mentioned it to him in passing, he did not react with the excitement I expected, but he wasn't totally against it. I figured he would come around to it more once he watched a few birth videos and realized what he was in for. Let's just say my hubs is not the most doting fella. The dreams of a cool cloth on my forehead were unlikely to be realized, and I knew I needed my mom there to support me, and to support my husband, too.

Related:
My Mother-In-Law Is the Reason My Husband and I Ended Up in Couple's Therapy

Fast forward a few weeks, and we're at my in-laws for the holidays. "Out of the blue" my mother-in-law asked me about my birth plan. I immediately sensed a hostile takeover was in motion. My husband had clearly talked to his mom about my desire to have my mom in the room during labor and delivery, and I was about to find out why that wasn't going to happen. I won't go into the nitty gritty details, but basically my mother-in-law had convinced my husband that it wasn't appropriate for my mom to be in the room when I delivered our baby. She told me that it was a special moment for a husband and wife, not one to be shared with other people. She said it wasn't fair to my husband to have my mom there if he wasn't comfortable with it. Even my sister-in-law, who I absolutely love and adore, agreed. All of a sudden, my husband was fully against the original idea. I couldn't believe it. I felt totally betrayed. I was hurt that my husband didn't voice his feelings to me plainly before he confronted me with his mom and sister. I took it personally that he didn't want my mom in the room to share this amazing moment with us. I tried to defend my opinion, and explain that up until this very moment, I had no idea that my husband was so against the idea, but the words kept getting stuck behind the huge lump in my throat. I went upstairs, had a good hysterical cry, and tried to put the uncomfortable situation behind me until we got home.

I felt so distant from my husband at a time when I thought we should be closer than ever.

When we were settled back home after our trip, I tried to explain to my husband how important this was for me, but he wouldn't budge. He kept reiterating what his mom told me, and it started to feel like he was putting his foot down just to put his foot down. I couldn't get him to articulate what exactly made him so against having my mom in the labor and delivery room, and every time we tried to discuss it, we ended up in a huge fight. I would end up begging him through hiccuping tears (shout-out to pregnancy hormones!), and he would end up red-faced and frustrated. We went back and forth for three agonizing months. How was I going to break the news to my mom? I was heartbroken, and I knew she would be too. I couldn't sleep. I felt so distant from my husband at a time when I thought we should be closer than ever. After some time, we came to a "compromise." My mom would be with us for most of my labor, but when it came time to start pushing, she would leave. Honestly, this felt worse to me than not having her there at all, but I was just grateful that I had moved the needle on the issue.

Things changed when (who called it?) my husband and I were watching birth videos in HypnoBirthing class. In every video we watched, there was at least one support person in the room besides the partner. In one video, the mom-to-be had her parents, her in-laws, and a friend in the room! If you have taken a HypnoBirthing class, you know that these videos can get pretty intense. The graphic truth of birth was looking my husband in the pale and nervous face, and the idea of taking it on alone was clearly beginning to shake him up. One night as we were walking to the car after class, he "casually" dropped that maybe it was a good idea to have my mom there after all. He explained he didn't realize how common it is to have multiple support people in the room during delivery since his mom and sister only had their spouses with them. While it still irks me to think that he cared more about what they thought than what I felt, I have never felt so relieved in my life when he happily agreed to share the experience with my mom.

I was induced a few weeks before my due date, and my mom was there the whole time. And thank goodness she was! She and my husband were an amazing team. My labor was long and hard, and while my husband did hold a cool cloth on my forehead, he needed more support from my mom than I did. I ended up hemorrhaging and needing surgery shortly after my healthy baby girl came into the world, and I don't know what my husband would have done if he was alone the whole time I was in surgery.

Apart from the unexpected surgery, it was everything I dreamed of. I am so grateful that I had the chance to experience such a beautiful moment with my mom by my side. And best of all, I got to look into my baby's sleepy eyes and say, "Wow, it was worth it."