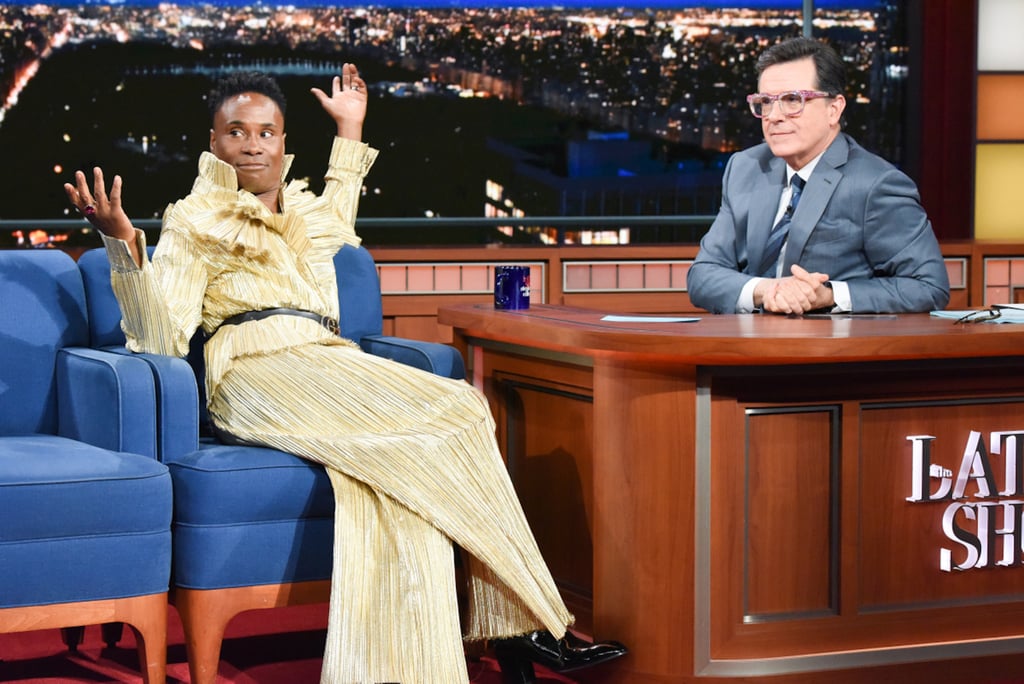 "The Minute a Man Puts on a Dress, It's Disgusting" — and Billy Porter Doesn't Have Time For That

When Billy Porter made his debut on The Late Show With Stephen Colbert, he was dressed in a gold-pleated Alex Vinash ensemble and Gucci belt that was clearly more exciting than the outfits Colbert's recent guests have worn. "Thank you for dressing appropriately," he exclaimed when Billy walked out. "Well listen, she's a fashion icon now. There's an expectation, so I have to show off appropriately," Porter replied. Colbert and Porter then went on to discuss Porter's recent red carpet moments that have certainly empowered us here at POPSUGAR. The Pose and award-winning Kinky Boots star then said something that really stuck with me when asked if he feels that fashion makes a political statement:

"I think it can. I've always been into fashion, and I think especially when it comes to gender. We've moved beyond the idea that women wearing pants is a problem — thank you Katharine Hepburn. Women wearing pants is powerful, it's strong, everybody accepts it, and it's associated with the patriarchy. It's associated with being male. The minute a man puts on a dress it's disgusting. So what are you saying? Men are strong, women are disgusting. I'm not doing that anymore. I'm done with that. I'm a man in a dress, and if I feel like wearing a dress, I'm going to wear one."

I've never wanted to stand up and scream "Hell yes!" in the middle of my office on a Thursday morning quite so badly. Billy's appearances at the Tony Awards and the Met Gala didn't just make an impact because his outfits were extravagant or more over the top than other celebrity looks, they challenged gender norms, and we've never been so ready for such a firm stance on that. Keep reading to watch Billy's interview, then check out his defining moments on the red carpet so far.

Related:
I Could Never Strike a Pose Like Billy Porter Did in This Velvet Tuxedo Gown at the Oscars
Previous Next Start Slideshow
Stephen ColbertRed CarpetBilly PorterThe Late Show With Stephen ColbertMenswearDressesCelebrity Interviews