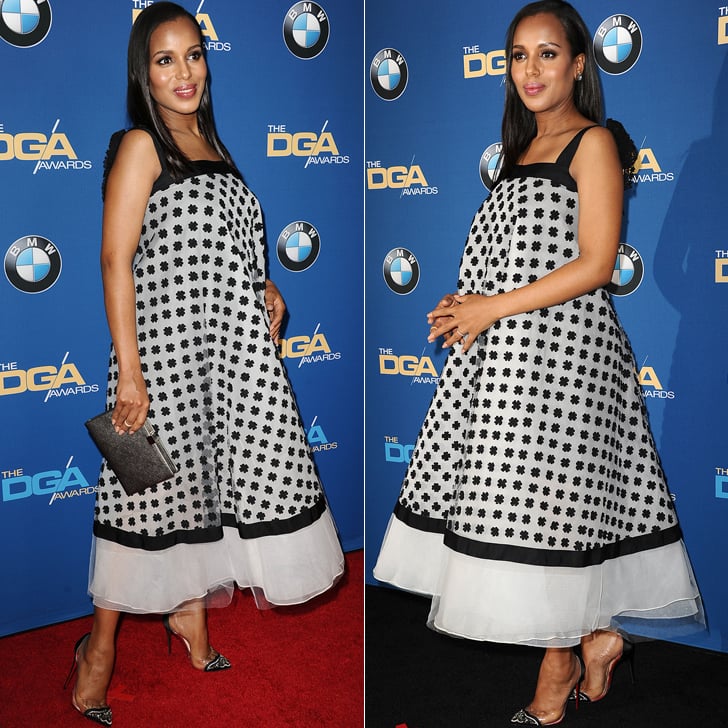 Considering how polarizing her last major red carpet look was, we can see why Kerry Washington went with a less controversial look for the Directors Guild Awards on Saturday. Instead of the belly-baring crop top she wore the last time we saw her out, Kerry chose a generously cut black and white dress from Oscar de la Renta's Spring 2014 collection, paired with Christian Louboutin pumps and Neil Lane diamond earrings.

Because the shape of this dress floats away from the body, a passing glance might not reveal Kerry's pregnancy. But the actress, who famously declared that she has nothing to hide when showing off her growing bump at the SAG Awards last week, was sure to show off her stomach for the photographers while she was on the red carpet.

It's definitely a departure, but do you like the new direction she's going in?

Sarah Hyland
Sarah Hyland and Wells Adams Made the Most of Their OG Wedding Date in "Mr." and "Mrs." Face Masks
by Sarah Wasilak 22 hours ago

Fashion Designers
The Looks in Cardi B and Megan Thee Stallion's "WAP" Video Are Certifiably Chic, 7 Days a Week
by Brea Cubit 1 day ago