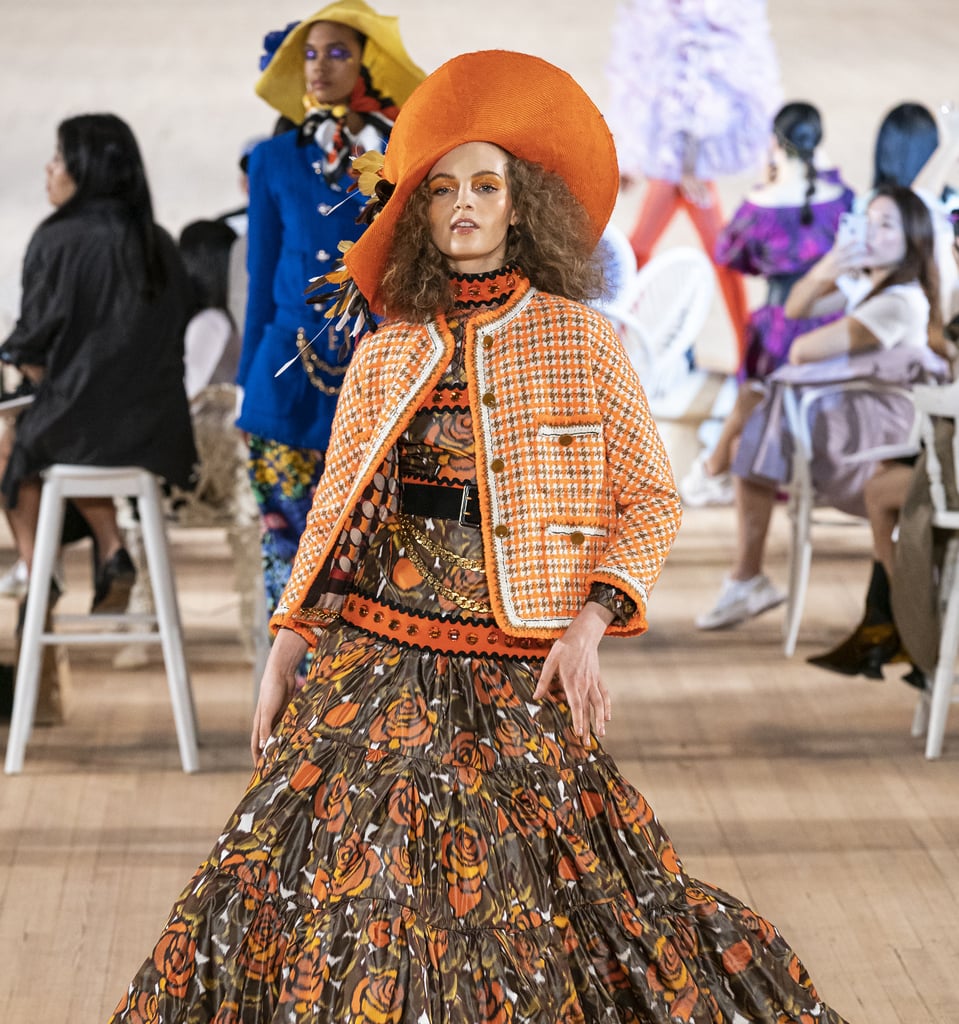 Marc Jacobs's Spring 2020 runway — the finale of Fashion Week and never one to disappoint — began with a swarm of models emerging to "Dream a Little Dream of Me," approaching, then walking right through the designer's sporadically placed guests, who sat in chairs across the gymnasium floor at Park Avenue Armory. Their looks were a theatrical trip through every decade. It was almost impossible to digest all the fashion at once, which I suppose Marc anticipated, as his models regrouped offstage and then resumed a traditional runway show, debuting their outfits one by one.

There were '60s shift dresses paired with tights, a look made famous by the likes of Twiggy and Edie Sedgwick, and then there were '80s ensembles straight out of Stranger Things, or, you know, the actual, '80s, and there was even western influence with the help of a cowboy hat. Menswear-inspired three-piece suits paid homage to the early ages, but these grew more eccentric, some covered in sparkles from head to toe. If all that, plus the oversize two-tone butterfly sunglasses and multicolored loofah dress, were not enough to entertain, the models who roamed through the audience were more animated than what is typical.

Binx Walton swayed her hips and tried out some subtle dance moves, Bella Hadid wore a big, bright smile, Gigi Hadid tiptoed barefoot, and Kaia Gerber sported a shimmering, dramatic dress with ruffles that extended from the sleeves — it was one I could see on the red carpet, perhaps on someone like Billy Porter. I also liked that Marc's casting was diverse. We got to see his clothes on a range of body types — though, given that each piece from this collection was representative of a different style, a different personality type, a different moment in history, I would've liked to see an even wider range.

Marc Jacobs is a veteran designer who never fails to remind us that there can be newness to fashion, despite cyclical trends and routine street style. I'm never quite sure how he's going to outdo his presentation from the previous season, but Marc's runway is a stage, and he lives to leave us starstruck every time. This particular line salutes the one he showed in 2001 at Pier 94, in remembrance of 9/11. "From the genius of Karl, the cheerful and bright-eyed positivity of Doris Day, the incomparable timeless style of Lee Radziwill and the effortless coolness of Anita Pallenberg that endures a half century later..." he wrote on Instagram — a very fitting summary.

by Simrin Purhar 6 hours ago