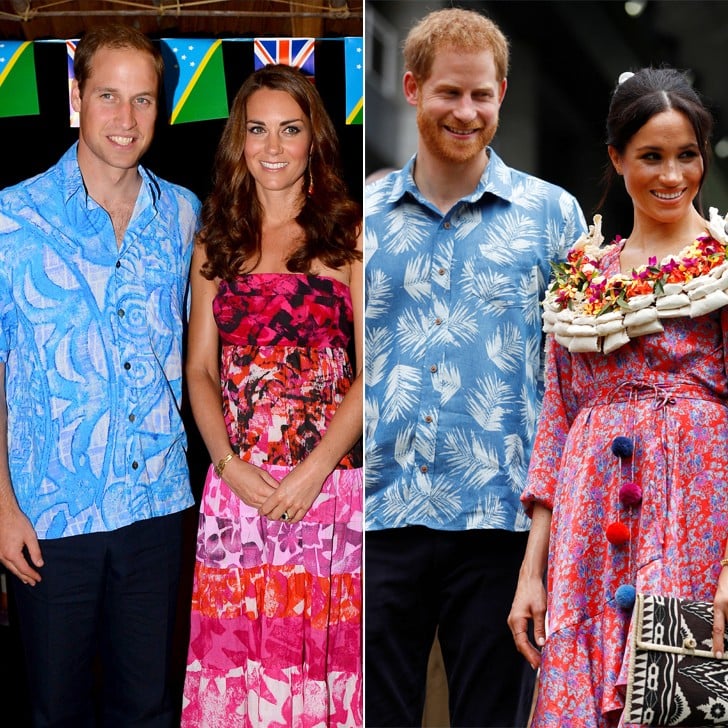 How does that saying go? "Royal families that share outfit ideas together, stay together," right? Well, it's certainly starting to seem like this is an age-old proverb, especially considering the fact that Prince Harry and Meghan Markle just made an appearance wearing outfits that looked eerily similar to ones that Prince William and Kate Middleton wore during their own royal tour six years ago.

On Oct. 24, the Duke and Duchess of Sussex paid a visit to the University of the South Pacific in Fiji as part of their 16-day royal tour, and they dressed in fun, casual outfits for the occasion. Meghan wore a multicolored Figue dress with pom-poms and asymmetrical ruffles, which she styled with black Castañer espadrilles and a patterned clutch. Meanwhile, Harry emulated dad-to-be vibes in a light blue tropical shirt and navy pants.

Related:
Exactly Where You Can Buy All of Meghan Markle's Royal Tour Looks

As soon as the happy couple arrived at the event, we had flashbacks to 2012, when William and Kate wore outfits with the same exact color palette during their nine-day Diamond Jubilee tour of the Far East. Back then, while visiting the house of Governor General Frank Kabui in the Solomon Islands, the Duchess of Cambridge wore a pink patterned dress and espadrilles, while her hubby wore — yep, you guessed it — a blue and white patterned button-down. Little did they know, six years later and just a few thousand miles away on a nearby island, their fellow royal family members would seemingly emulate their style. Read on for side-by-side comparisons to see just how similar their outfits really are.

The Royals
Looking Back at Queen Elizabeth II and Prince Philip's Honeymoon, Nearly 74 Years Later
by Allie Merriam 5 hours ago