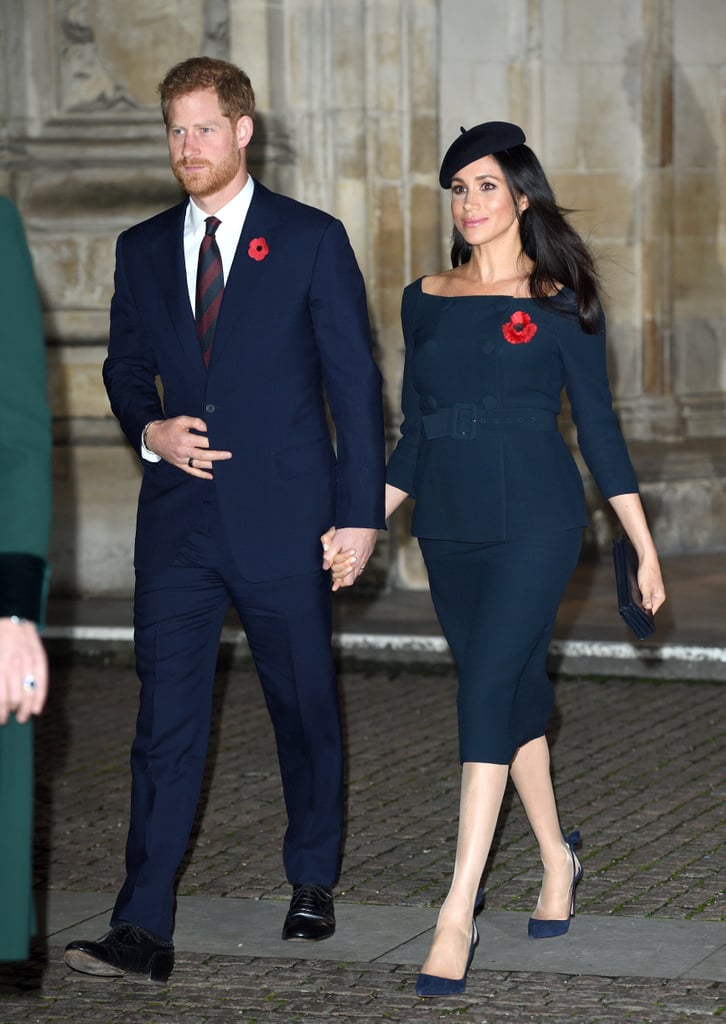 Meghan Markle recently participated in her very first Remembrance Day weekend, which included several appearances at solemn services. The Duchess of Sussex chose a variety of appropriate outfits for the royal events, including a navy blue suit dress that is reminiscent of her past fashion picks.

The duchess honored those who have suffered and died in war by dressing in all-black for most of the weekend. She chose a Stella McCartney coat for the Festival of Remembrance on Nov. 10, with a black sheath dress that retails for $80 at Marks & Spencer underneath. The following day, she wore another monochrome black coat for the Remembrance Day Sunday service at the Cenotaph, this time pairing the outfit with Vanessa Tugendhaft earrings. That same evening, Meghan opted for a deep-blue suit dress and a Stephen Jones beret for the Centenary of the Armistice, mimicking a look she has worn during other important royal outings. Throughout each event, Meghan was seen wearing red poppy pins, a traditional Remembrance Day tribute.

Meghan stepped out in a similar pink Prada suit dress earlier this year for Queen Elizabeth's Young Leader Awards. The dress features the same bateau neckline, belted waist, and button detailing as the duchess's Westminster Abbey ensemble. Her outfit also calls back to her Trooping the Colour look from June. This time around, Meghan paired the dress with matching Aquazurra heels and a Dior clutch. See more photos of her similar looks ahead, plus the other outfits she wore during the Remembrance Day weekend.