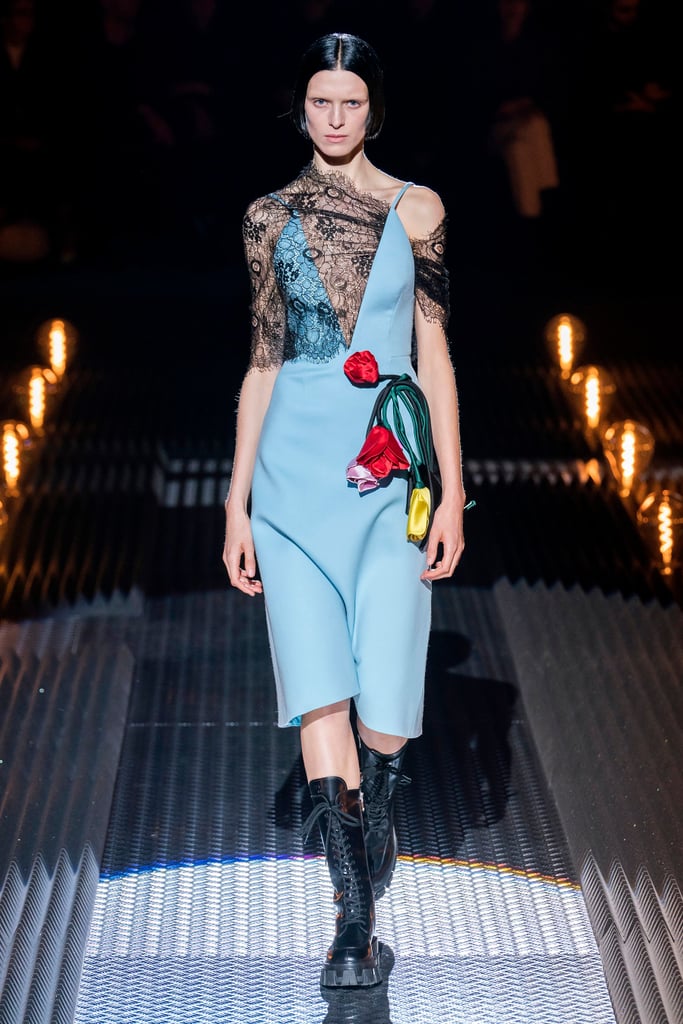 Part goth, teenage rebel, part '50s housewife and utilitarian explorer, Miuccia Prada's Fall 2019 lineup proves she can dress anyone. That's not to say her collection lacks direction — the saying "there's something for everyone" applied here isn't a knock on her creative prowess, but rather points to how Prada is one of the few designers who creates clothes women almost universally want to wear. This season, that look is at once gothic and angsty, and womanly, reimagined. Her take on the hallmarks of these dressing tent poles — combat boots at the core of goth wardrobes and '50s-feeling sheath dresses that defined an entire era of feminine dressing — are delivered with delightful new details. Clunky boots are finished in pink and red patent and, in some cases, given cargo pockets fastened around the ankles. (Gimmicky? Maybe, but as a new mom, I'm always — and desperately — seeking additional storage compartments.)

On that note, the shoes and bags are stars. There are furry bags in bright colors that will become street style mainstays. Models carried them with utilitarian jackets and suits, as if to say even women on a mission deserve a great handbag. The more-ladylike bags were oversize with flaps and shoulder straps, the kind of classic shapes you'd invest in now and carry for years to come. Then, there's the more whimsical add-ons: satin bags with tulips and rosettes hanging off the sides. They're romantic, but not in a typical way; they feel darker and a little sad, like bouquets that were cobbled together by a sulking teenager. They reappear throughout the lineup, on belts or as added embellishments to floral dresses or a pencil skirt, but they're most fun on dangling earrings that are at once nostalgic, playful, and fashion-forward.

That's the thing about Prada and this collection — if you could pinpoint the vibe to something specific, the look wouldn't be nearly so good. But Miuccia is a master at making clothes that speak to us for different reasons, that attract different types of dressers. She brilliantly juxtaposes the military-inspired jackets with glittering ruby and silver heels (sure to be the style set's next shoe obsession) and pairs her eccentric, cartoonish nods to Frankenstein's monster and his bride with delicate lace and an expertly draped pencil skirt so each look is multifaceted, never veering into cliché.