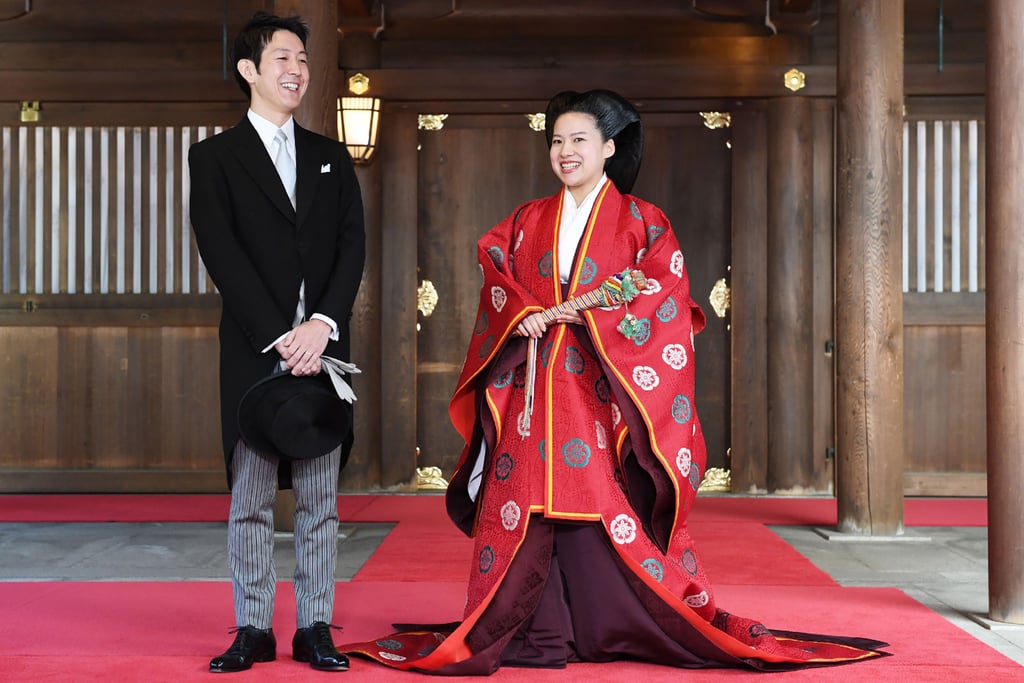 If Japanese Princess Ayako's Sweet Love Story Doesn't Win You Over, Her Wedding Dresses Will

Japan's Princess Ayako has now given up her title to wed longtime love Kei Moriya, who is not of royal descent. Despite the law that says women must give up their ties to and fortune from the imperial family if they choose to marry outside of royalty, Ayako and Kei tied the knot during a ceremony at Tokyo's Meiji Shrine.

Interestingly, despite the difficult decision the couple made, there were so many small details that paid homage to Ayako's heritage and Japanese nobility, most noticeably in each of her bridal looks. While Moriya completed his pinstripe pants and long blazer with a silk top hat that belonged to Ayako's father, Ayako's two gowns were keepsakes that date back to Japan's Heian era and have been worn by ancestors.

Ayako's first ensemble, an embroidered uchiki kimono, hit just below her knees, so she could show off her purple hakama, a type of trouser that she coordinated with her matching shoes. Once she reached the temple, she changed into a traditional red kouchiki made of silk that cascaded like a waterfall down to the floor.

At a celebratory banquet later on, Ayako's outfit seemed to scream "forever a princess," as the dress's delicate floral appliqué laid so elegantly over a sugar-pink, full-skirted gown. Read on to see photos of Ayako and Moriya enjoying the day with their guests, and zoom in on the meticulous details of their outfits, which will go down in history just like their love story.