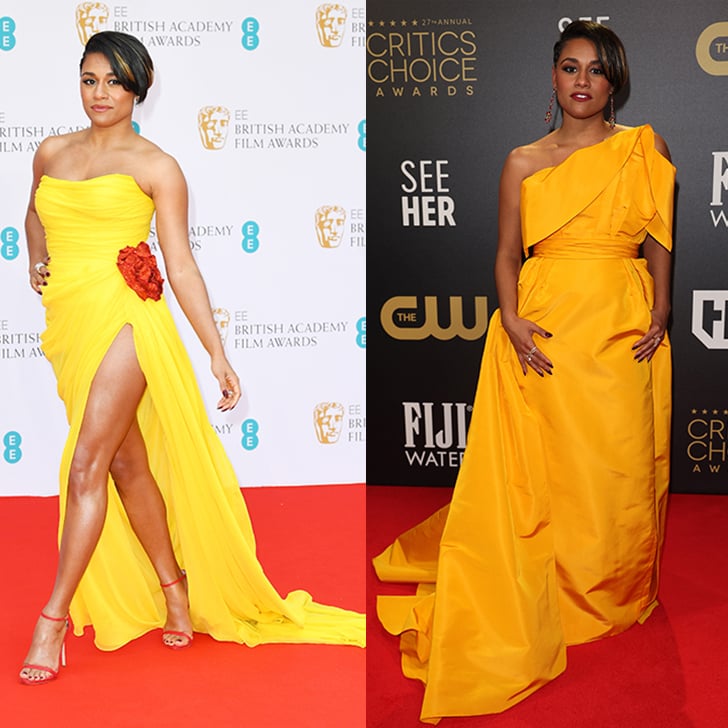 Ariana DeBose has enjoyed a victorious 24 hours, winning the award for best supporting actress for her role as Anita in "West Side Story" at both the EE BAFTA Film Awards and the Critics' Choice Awards. She was styled by Zadrian Smith and Sarah Edmiston for both events, which took place on the same day. If recognition at the ceremonies wasn't enough to emphasize her growing stardom, the glow of her yellow gowns sure helped.

Her first look was a custom design from the team at Oscar de la Renta in yellow, draped silk chiffon with a beaded red flower at the hip that drew attention to the gown's jaw-dropping leg slit and train. Her stylists explained that by working with a Latin designer, DeBose was able to honor her identity while paying homage to Anita's iconic dress from "West Side Story."

Later, DeBose joined the stars who attended the Critics' Choice Awards from London, sporting a goldenrod gown straight off the Carolina Herrera fall 2022 runway. (She gasped when she saw it debuted.) This was yet another opportunity to work with a Latin fashion house, which was of utmost importance.

The one-shoulder column silhouette came with excess fabric that made for a regal moment when DeBose went for a twirl, and further movement was added by her Chopard drop earrings, totaling over 16 carats of pear-shaped rubellites, 14 carats of rose-cut tourmalines, six carats of marquise-cut amethysts, and diamonds set in 18k rose gold.

DeBose added just a subtle, jewel-toned color pop to each head-to-toe yellow moment. Needless to say, it's tough to pick a favorite. There's no denying she's an all-around winner, but which yellow gown came out on top for DeBose?