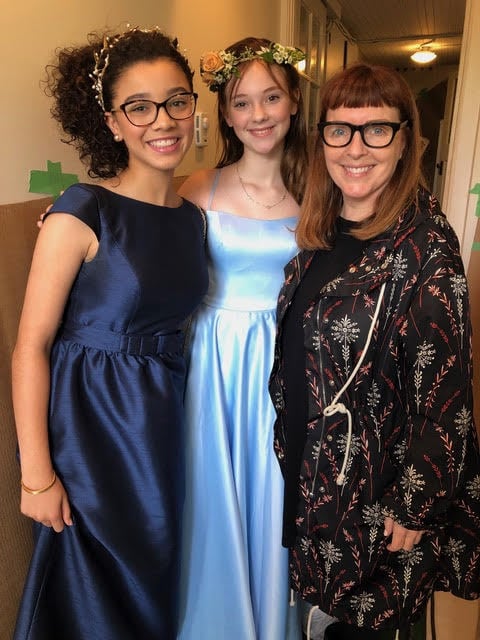 I grew up reading every Baby-Sitters Club book I could get my hands on at my school's library. I absolutely wanted to be "Cool Claudia" but eventually I came to terms with the idea that I was probably more of a Mary Anne with some rare Kristy moments. The only way that I could really envision the characters or their style was from the series's illustrations by Hodges Soileau, so I relied on my imagination to fill in the blanks. Flash forward a decade (or two), and somehow costume designer Cynthia Summers perfectly illustrates my 13-year-old dreams, only better for the new Netflix series.


"The best part of a fitting was just being creative in the moment and [the] excitement of girls."

I chatted with Cynthia for an exclusive POPSUGAR interview because I just had to know more about her process bringing the club's looks to life. She walked me through every step, from research to shopping to fittings with a cast of 12-, 13-, and 14-year-old girls. "The best part of a fitting was just being creative in the moment and [the] excitement of girls," she recalled. "They were very trusting. And I think that shows."

"They were all amazing, and they were all supercollaborative," she continued. Cynthia would read their body language to see how the actresses felt about their costumes and assess whether changes needed to be made. "I'd either talk them through it or I would figure out what's making them uncomfortable in this moment in this outfit. And then, we'd adjust from there."

Although each actress is different from her character, Cynthia noticed their real-life style changed after wearing costumes for the show. And could you blame them? "It's like having a personal shopper," Cynthia joked.

Read on to find out how she styled each character — including what went on their mood boards — and get a glimpse at never-before-seen, behind-the scenes photos. You'll love these whether you're a Dawn or a Stacey, I promise. Fingers crossed we hear about a season two soon, because the club deserves more iconic style moments.