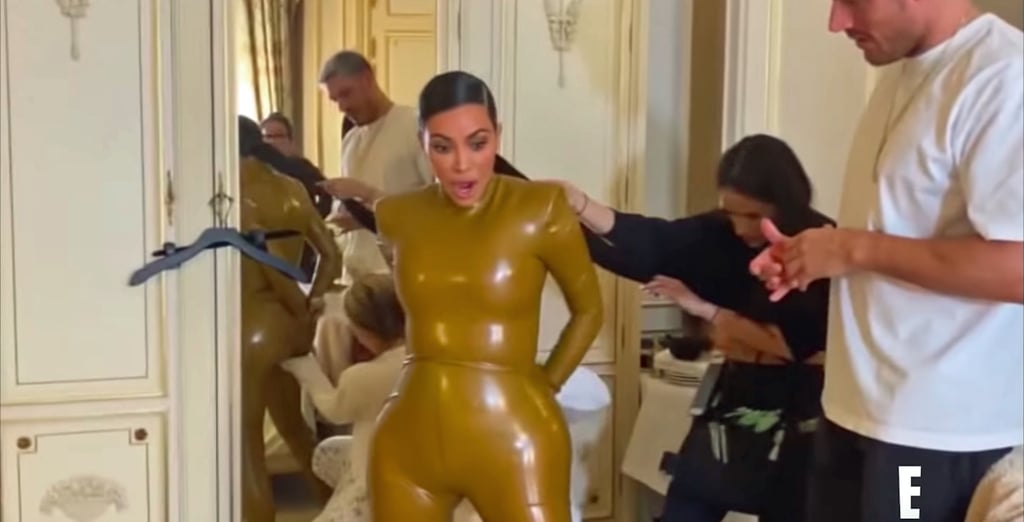 Kim and Kourtney Kardashian prepared for Paris Fashion Week on Keeping Up With the Kardashians, and we were all just generously bestowed with a clip of the action. "Did it rip?" Kim wondered as she pulled on the pants portion of this unbelievably tight ensemble that Balmain's Olivier Rousteing created for her. You'll probably recall when the sisters paraded their looks in the street for the cameras before the Balenciaga show earlier this month. As we were to find out, Kourtney kind of had to go to the bathroom in the moment, but she was holding it for fashion's sake.

Kourtney and especially Kim are not strangers to sacrificing human necessities if it means pulling off a really major look. Kim couldn't pee for the entire Met Gala because of her Thierry Mugler dress that literally dripped off of her and was covered in crystals. We'll also venture to say that her actions were limited in those Atsuko Kudo 'fits that made headlines.

We enjoyed this snippet from KUWTK mostly for the general chatter between both sisters as they mused over their wild outfits and Kim's gratitude for stylist Marni Senofonte. "Like literally what would I do without Marni? I didn't even think you were coming this morning," Kim said. "You would actually do this [yourself]. That's the thing. You would actually do this," Marni said as she hoisted the latex up Kim's leg little by little. Scroll through to watch the hilarious scene unfold.