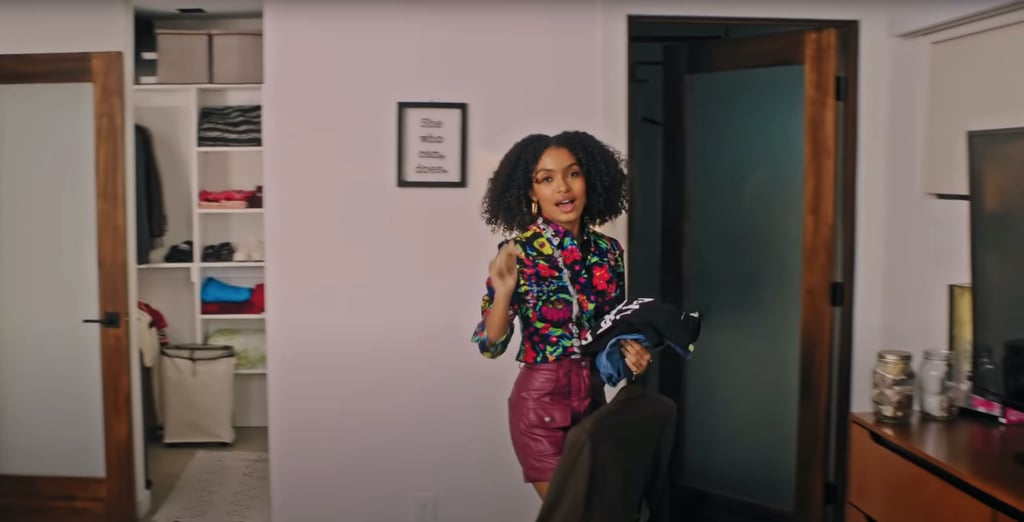 Yara Shahidi joins the long list of celebrities who have answered Vogue's 73 Questions, which usually dabble in the topic of personal style. When the Grown-ish and Black-ish actor was asked about her personal style evolution, she knew just what to say, explaining that fashion helps her take up space in the world, and she'll often wear more vibrant prints to feel present in the moment (much like the Versace top she wears for the video). "It started with only high-top sneakers and skirts when I was little, then I switched to super preppy. I would only wear plaid skirts, long knee socks, and oxfords," Shahidi recounts. "Now, I wear a lot of prints, blazers, or a monochrome tracksuit, and nothing in between."

But while she's specific about her taste as Yara, we all know that when she slips into her character Zoey Johnson on Grown-ish, she gets to be someone else — and that involves a whole different wardrobe. So what was her favorite style moment from the show? "That's so hard. [Costume designer] Michelle Cole kills it. But I'd have to say most recently our homage to Aaliyah at Zoey's 21st birthday party. That's one of my favorites," she says in the video. Shahidi famously Instagrammed a BTS shot from set wearing Tommy Hilfiger head-to-toe as Aaliyah, and even then we could tell just how into the nostalgic '90s vibe Shahidi appeared to be.

Ahead, check out Shahidi's favorite outfit from Zoey's closet in action on the show, and then watch the video to find out a few more tidbits about the star's clothing preferences, from her favorite pair of jeans to her must-have style staple, which she actually stole from her brother's closet.