Most people would assume that taking birth control would be the most ideal situation for women, but not every method affects every woman the same way. Read on to find out how the IUD was a living nightmare for one woman from our friends over at YourTango. 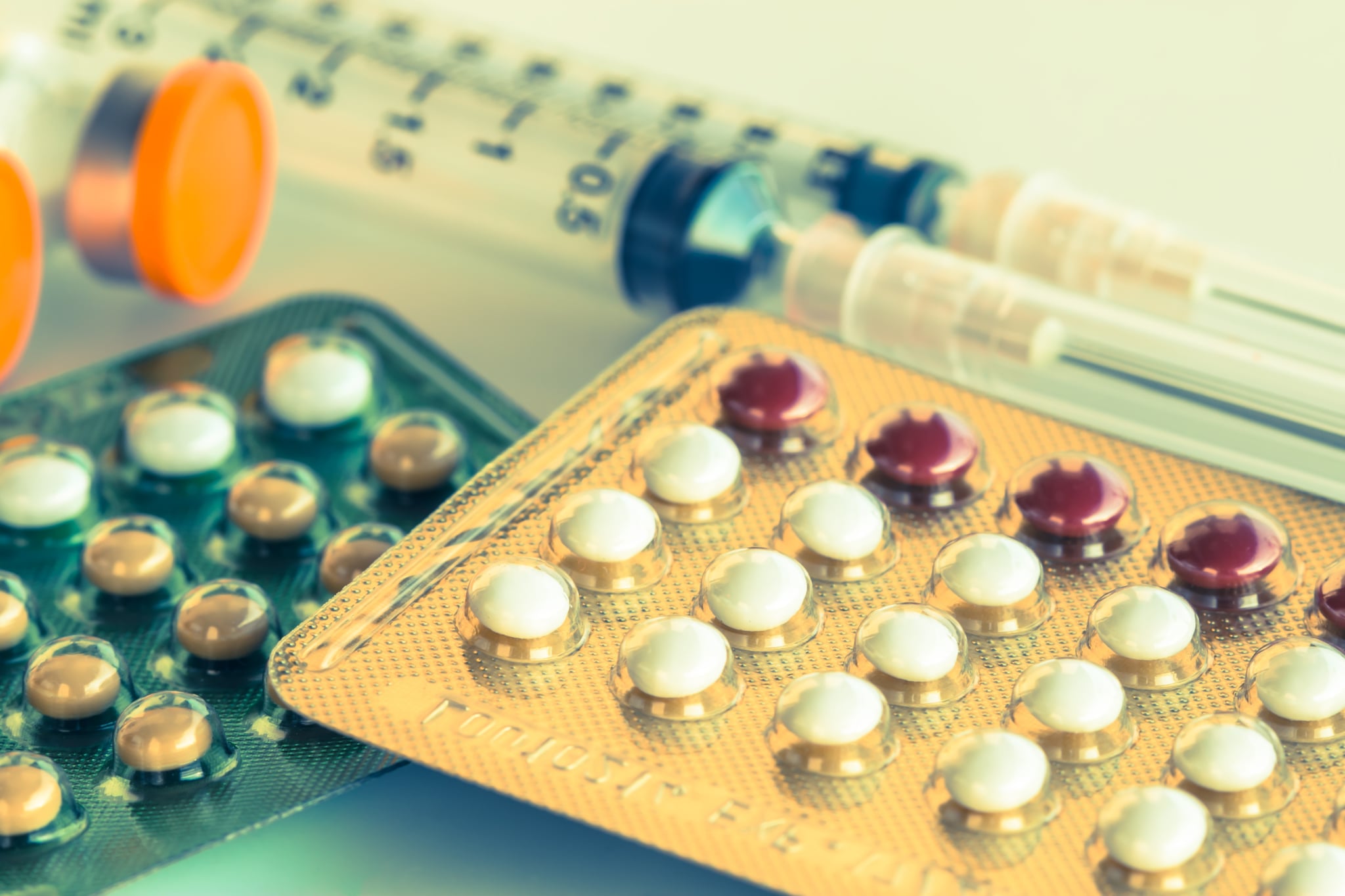 For those few months, I had lost my control to a bit of copper wire.

"I just want it all to end," I heard myself say as I sat sobbing on my bed, my husband sitting next to me, an arm around my shoulder. I meant my life. I wanted my life to end.

I'd never felt suicidal before, and I didn't think I really truly felt that way at this moment, but I did have a vague and unrecognizable desire for all the stimulus in my world to come to a halt, to have what I was feeling in my mind and my body just ... cease.

My husband looked me in the eyes. "That's it, we're calling the doctor."

You see, less than a year earlier, I had gone in for a routine replacement for my IUD. After having two kids within two years of each other in my mid-twenties, I had no desire to bring a third little miracle into the world, and had gotten an IUD inserted to make sure I didn't.

At the time my doctor suggested I not get the hormonal kind, since a rare complication of pregnancy called cholestasis (which involves liver toxicity, blood poisoning and uncontrollable itching under the skin) made me at-risk for reactions to hormonal birth control.

So I took a deep breath as they shoved a copper wire into my uterus, felt a cramping sensation, and then it was done. And for seven years that tiny little twist of copper kept the stork away.

They recommend you replace your IUD every five to ten years, though, and when I went in to do so, it was with a new obstetrician in a new city who poo-pooed the notion that hormones would lead to any sort of negative reaction on the part of my body, and extolled the virtues of the Mirena IUD, which would shorten my period length, reduce my cramps, and generally be a little metal medical miracle. I had it inserted.

A month later my mom was diagnosed with lung cancer. She had never been a smoker, so the news was a shock. I didn't handle it particularly well, as is to be expected. I was on edge a lot in that first month, waiting for more information, tests, and declaration of its stage, scope, severity.

I cried at unexpected times, and I wasn't a crier. (Like, so much not a crier that I sat through the end of Titanic with bone-dry eyes and a nagging thought that Rose returning to Jack upon her death was a real kick in the balls to the husband with whom she'd actually spent the better part of her life.)

And yet, there I was, breaking down at the first sight of a puppy or a Cheerios commercial or God knows what else makes people cry.

I might have noticed this change wasn't normal if it weren't for the fact I presumed my reaction was related to the news of my mom's cancer. But even though I didn't notice, my husband did.

He, of course, didn't dare call it to my attention at first because it basically played like one giant, overblown bout of PMS. But bleeding or not, my emotions became heightened to unmanageable levels.

Once, I pulled the car over, got out and walked a mile home, leaving my husband to drive my child and their friend home because I was angry they'd been wrong about the time of a play and had driven to the theater two hours early. You know, your standard reaction to a logistical mix-up. Still, I resisted blaming it on the IUD.

I resisted because, like most women, felt uncomfortable with the possibility that my emotions had been altered by hormones being pumped into my body. Menstruating women are constantly being policed for their moods, their reactions to events, their levels of rationality or lack therefore. We're constantly bracing ourselves for the claim that we aren't 'in control' of our feelings and action, that our wombs dictate our personality.

And of course this is false, but it's a little true. (It's a little true for everyone, in fact. We're all a mushy glob of cells and synapses and hormones and memories and traumas and proclivities and phobias and fantasies.)

No one is always in control. And for those few months, I had lost my control to a bit of copper wire.

The bigger tip-off was when I started getting jealous when my husband would flirt with or even talk to other women. This definitely wasn't me. In fact, my husband and I have an incredibly laissez-faire attitude toward flirting.

We both feel secure in our marriage and generally don't feel threatened by each other's relationships. Maybe this sounds like bullsh*t to someone who regularly experiences jealousy, but I promise it isn't. Until I had my Mirena put in, I didn't understand jealousy felt at the molecular level. When people would describe it to me I'd be confused. "And you feel this? In your body? This is normal?"

Yet one night after he'd unwittingly spent what I'd arbitrarily deemed "too much" time chatting with an attractive young woman at a bar, I found myself screaming at him in the car. I hit him in the shoulder. Hard. I'd never hit anyone in my life. It was more of a meat-of-the-hand slap than a punch and he wasn't badly hurt, but he was more convinced than ever that something was very, very wrong.

"It feels like I'm going to throw up. What is this?" I asked him, screaming through sobs.

"I think it's jealousy?" he offered.

The culmination of everything: my mom's cancer, living with the irrational fear that my incredibly devoted husband was in danger of being seduced away, and generally treating every stressor like it was the end of my world, hit a boiling point when a disagreement with a friend led to the proclamation that I "wanted it all to end."

All the emotions I'd been experiencing seemed to press against every raw nerve in my body. I was worn down to the nub. I called the doctor.

"What did you say your symptoms were again?" the nurse asked.

"It's like I have the worst PMS ever all the time. Like, I cry a lot. And I get jealous of dumb things, and I never get jealous." I felt like I must have sounded so silly to her. These weren't symptoms of anything.

"I'll talk to the doctor and call you back," she said.

I got a call back a few minutes later. "The doctor says you should come in as soon as possible."

When I went in, the doctor told me that my reaction was rare, but real. That some women with hormonal IUDs experienced intensely heightened anxiety, irritability, and mood swings. That, in short, it wasn't me.

She removed the offending object and replaced it with the good old plain copper IUD I'd lived happily with for years. When she held the offending IUD in her hand it looked so tiny, this thing that had been controlling me. I remember thinking of The Wrath of Khan and the slimy creatures that crawled into everyone's ears and controlled their minds. She wrapped it in a paper towel and tossed it in the trash.

It only took a few weeks to feel like my regular self again. My mom still had cancer but her chemo was going well, and I could start to contextualize the disease, without the constant drum of irrational angst that had been beating in my brain for so many months.

I slowly stopped reacting to little inconveniences or misunderstandings like they were the end of the world. I went back to not much caring who my husband was with or for how long or how close he sat to them or what they talked about. (Jealousy seems like a perfectly reasonable response to a lot of situations. Maybe it's even evolutionary. I don't know, I'm not a biologist. But for me and my mind and body, it was one of the biggest signs that something was off.)

My husband noticed the change immediately because it was that stark, like someone detoxing from a drug, which is what was happening. He was glad to have his wife back in all her stoic grandeur, although he did admit that in a weird way he would miss my fits of jealous rage.

"It was sort of nice knowing you cared, you know," he teased one evening as we sat sharing a bottle of wine on our apartment balcony.