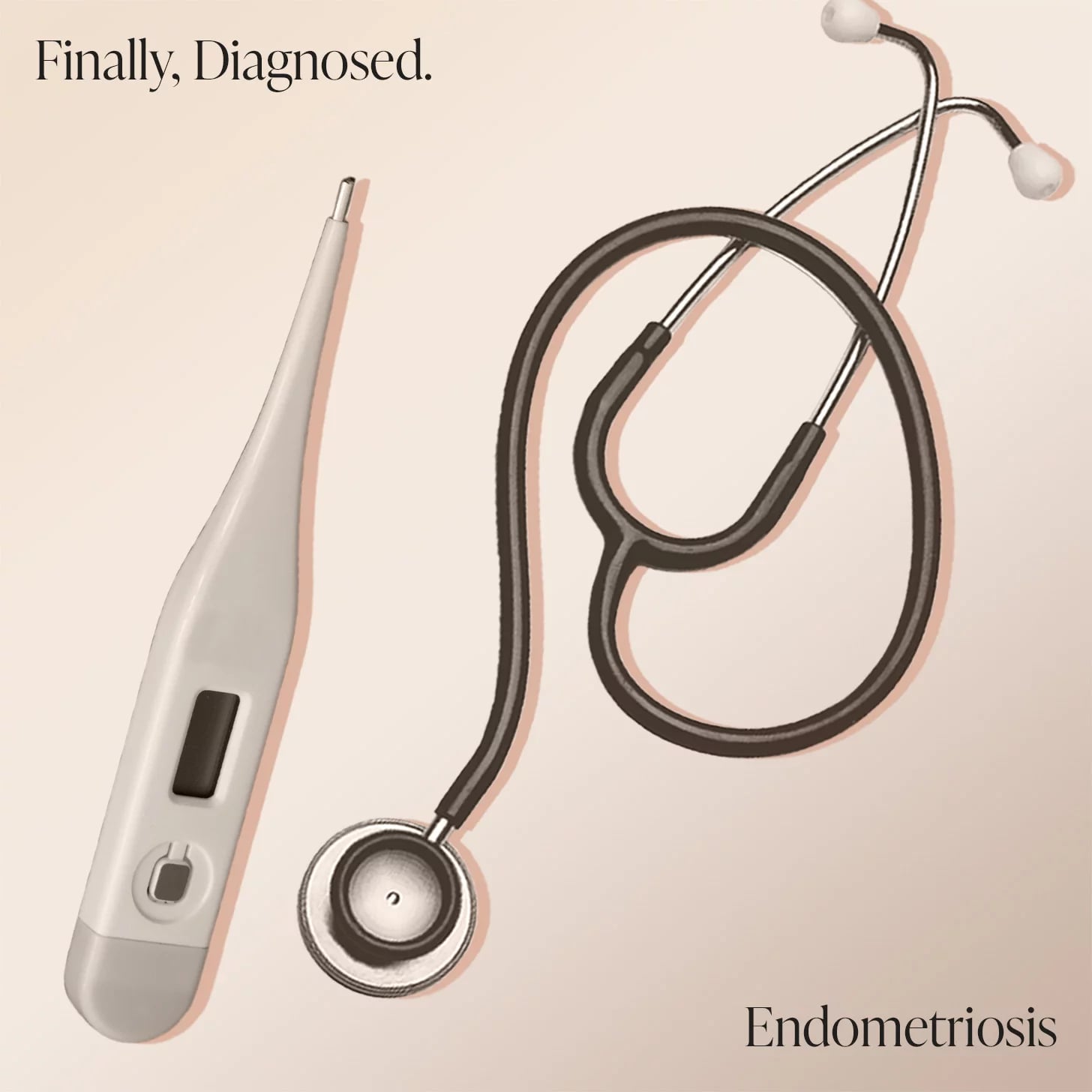 Each year in the US, an estimated 12 million adults who receive outpatient care are misdiagnosed, and oftentimes, those patients fall within a minority identity, including women, nonwhite Americans, and those within the LGBTQ+ community. That's why we created Finally, Diagnosed: a monthly series dedicated to highlighting the stories of those who've been overlooked by their doctors and forced to take their health into their own hands in order to get the care they deserve.

Rainelle Walker-White, a 25-year-old investigator from Boston, used to think that severely painful periods were normal. Starting in middle school, her monthly cycle came with cramping, heavy bleeding, nausea, and vomiting. "I would always miss school the first or second day of my period because symptoms were so bad," Rainelle says. By the time she got to high school, her pediatrician insisted she go on birth control to help with the symptoms, even though Rainelle didn't feel like that was the right option for her.

She was on birth control from senior year of high school until junior year of college. At that point, she ended up going off it for good, mainly because she noticed her periods were becoming extremely painful again. "I realized the medicine wasn't for me anymore," Rainelle says. "Birth control helped for some time, but it only masked the real problem." Still, when she asked about other treatment options, her doctor would only recommend the pill. "She wasn't hearing me and what my needs were," Rainelle says. It wasn't until Rainelle complained to her pediatrician of new vaginal symptoms, including recurring yeast infections and bacterial vaginosis, that she was finally offered a new solution. "That was the first time I was referred to a gynecologist," Rainelle says.

Rainelle asked her gynecologist to test her for endometriosis.

By this point, Rainelle had done her own research. Determined to advocate for herself, she was optimistic that with a new provider would come new opportunity to figure out what was really going on. "I told her about the symptoms I was having and how I thought I had endometriosis," Rainelle says. The doctor immediately recommended a vaginal ultrasound, and afterward, Rainelle was told she had adhesions, sticky areas of tissue joining her organs together, and cysts filled with menstrual blood, known as "chocolate cysts." In assessing these results, Rainelle's ob-gyn told her she was almost certain it was endometriosis. But the only way to officially diagnose endometriosis is with a procedure known as laparoscopy, during which a tiny video camera is threaded through a small incision in one's abdomen to examine the organs; endometrial tissue can sometimes be removed during the procedure as well. So the doctor referred Rainelle to an endo specialist for confirmation. "It was good to finally be heard by someone," Rainelle says.

In honor of Endometriosis awareness month I’m shedding light on a disease that affects more than 10% of women around the world. pic.twitter.com/LCPf2YU73j

In 2020, Rainelle had her first laparoscopy surgery and was diagnosed with stage four endometriosis. 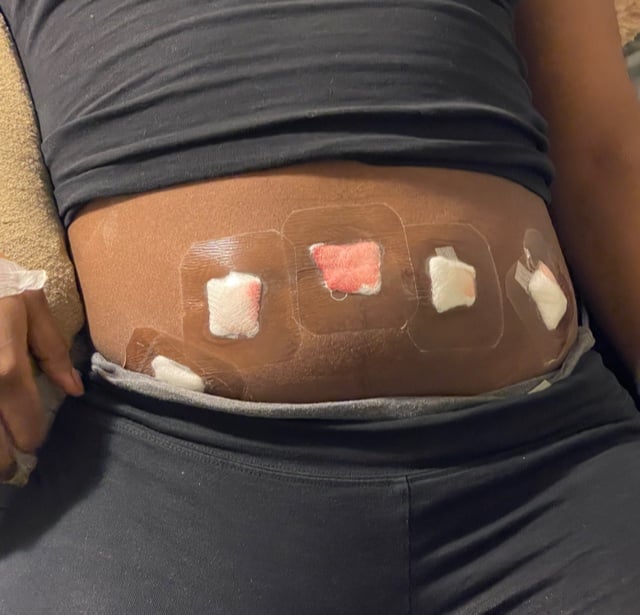 "When I found out that I had stage four, it was kind of depressing," Rainelle says. To wake up from surgery and have your condition be confirmed is one thing, but to have it be even worse than you thought it was, "it's traumatizing" she says. Still, Rainelle remained hopeful — she was under the impression that the laparoscopy could and would remove her endometriosis.

But a year after her first surgery, Rainelle started to experience more intense and excruciating pains than those she'd had prior to surgery. "Every day, I was in pain," she says. This time, it appeared in her hips and pelvic floor. She felt like she was constantly having contractions. "I just started doing more research after my surgery because the symptoms weren't going away. I started having a lot of pain again. And I was like, 'Something's just not right,'" Rainelle says.

According to the Cleveland Clinic, "recent studies have shown that endometriosis recurs at a rate of 20% to 40% within five years following conservative surgery." In Rainelle's case, it's unclear whether her endo returned or it was never fully removed.

When she went back to the doctor who had performed the diagnostic laparoscopy, "My doctor actually told me, 'I wasn't able to reach the bowel part of your endo because I don't specialize in that,'" Rainelle says. "I spent two years with that doctor just for him to tell me he couldn't even perform the rest of the surgery that I needed."

Rainelle was frustrated, to say the least. "I ended up switching doctors and taking my health into my hands again," she says, this time researching other endo specialists who had experience treating more severe forms of the condition.

In February 2022, Rainelle had another laparoscopy to remove the rest of her endometriosis. 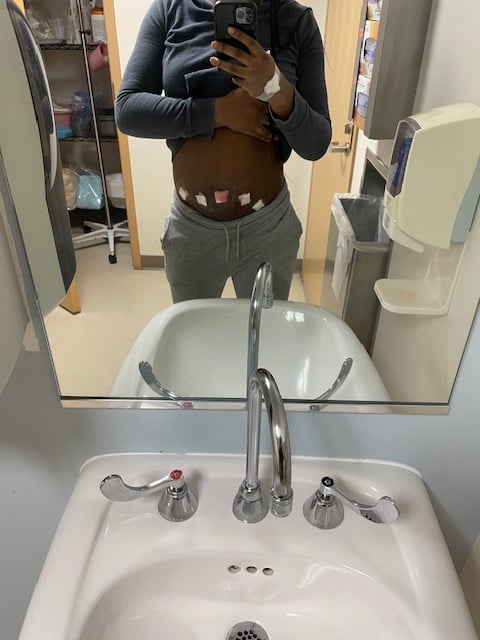 The second surgery was more invasive, and during recovery, Rainelle faced muscle spasms, cramping, and an allergic reaction to a painkiller she'd been prescribed. "I took about five weeks off of work, and I can still feel my incisions," she says. But today, she considers herself mostly healed — for now. Although endometriosis is a chronic disease and could come back at any point, Rainelle says that "as of now, I should be endo free," and she couldn't be happier.

Her advice to other women? Be your own best advocate.

"People undermine this disease, because a lot of people think, 'Oh, it's just a painful period,'" Rainelle says. But the truth is "painful periods are not normal." If you're experiencing severe pain during your menstrual cycle, it could be a host of issues, from endometriosis to uterine fibroids or ovarian cysts — none of which should be ignored. The key is to continue speaking up for yourself. "No one's going to care as much as you do, so if you're not advocating for yourself, then these doctors definitely won't," Rainelle says. 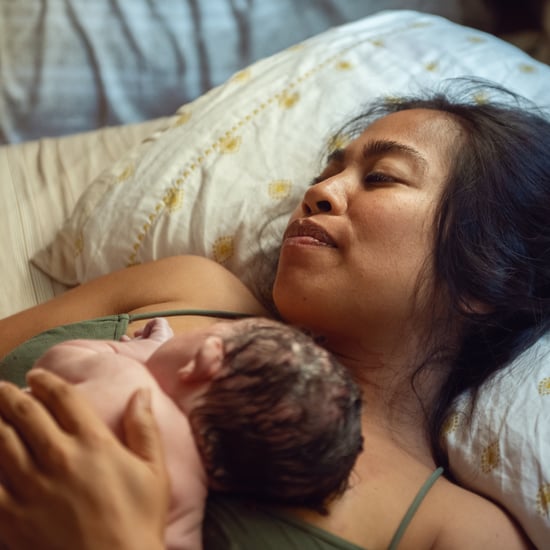 Pregnancy
Yes, the Husband Stitch Is Real — Here's How to Prevent It During Birth
by Sara Youngblood Gregory 19 hours ago

Health
Fat People Have Sex, Too, So Why Is It So Hard to Find Contraception That Works?
by Melanie Whyte 4 days ago