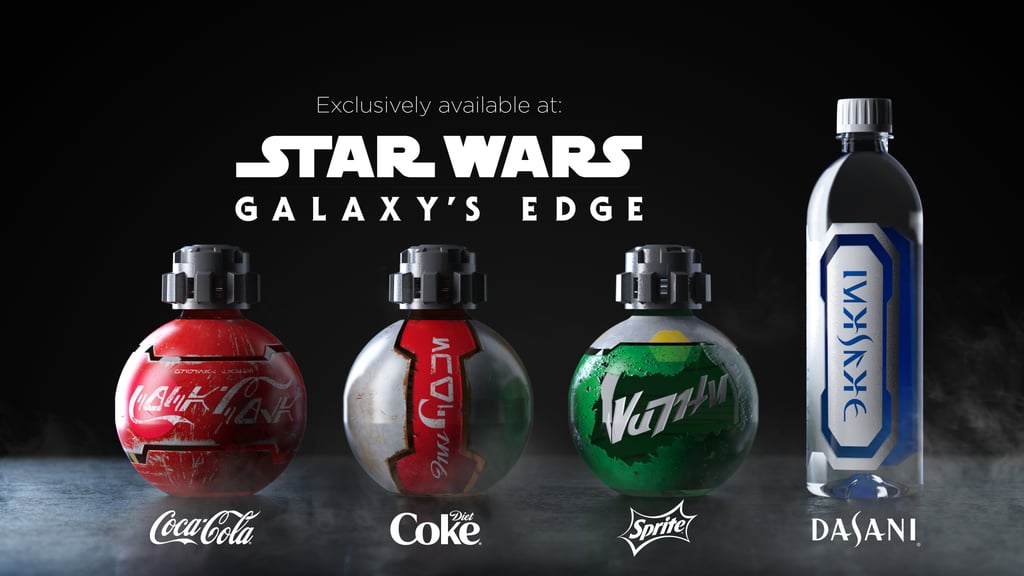 In a galaxy far, far away . . . Luke Skywalker spent his days on Tatooine drinking blue milk and also, apparently, Coca-Cola. OK, not really, but as part of Disneyland's never-ending mission to completely blow our minds, the park is opening an entire new section called Star Wars: Galaxy's Edge — and even the soda is space-themed. In partnership with Disney, the soft drink company is releasing custom bottles of Coca-Cola, Diet Coke, Sprite, and Dasani water, and the bottles look like mini droids!

The spherical "orb" bottles, which took three years to design, come with resealable lids and look like props straight out of the films, complete with scratched metal labels written in Aurebesh, the written form of Galactic Basic, Star Wars' featured language. I can just imagine Han and Chewie tossing these back in between missions or Rey sipping one down to wash away the taste of her ration pack.

"For over 40 years, people have been dreaming about stepping into the worlds of Star Wars," said Scott Trowbridge, the portfolio creative executive and studio leader at Walt Disney Imagineering. "With Star Wars: Galaxy's Edge, we want to give our guests the opportunity to finally make those dreams come true."

Star Wars: Galaxy's Edge will be open to the public on May 31 at Disneyland in Anaheim, CA, and on Aug. 29 at Walt Disney World, so hop into your space cruiser and check out the other galaxy-themed snacks Disney has in store.