Let's be real. We love cheese in its many forms: shredded, melted, sliced, cubed, you name it. And you better believe we're down to smother it all over any and every acceptable food. We never really thought this glorious fridge staple could be found in any other shape than a square, wheel, or sliver, but that was until we stumbled upon the star-shaped cheese served at Taco Bell. And, yep, it's just as absurd yet strangely crave-inducing as it sounds.

This one-of-a-kind topping can be found at the taco chain's locations in Japan (aka the source of some of the most outrageous fast-food items we've ever seen). Apparently, the star-shaped cheese is only served on top of the restaurant's tacos and taco salads during the holidays — because nothing says "Merry Christmas" like a sprinkling of celestial-inspired cheddar, am I right? Between this oddly Instagrammable taco topping and McDonald's new Blue Hawaii McFizz drink, it's safe to say we're booking our flights to Japan ASAP.

Related:
Eggs Benedict and 17 Other Crazy Pringles Flavors Only Found in Japan 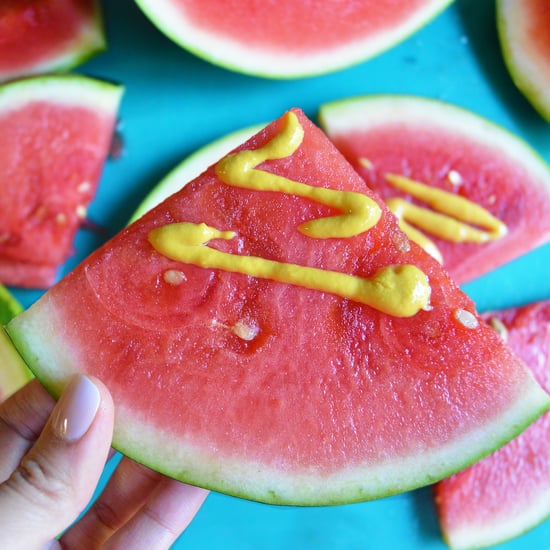 Food Reviews
I'm Afraid to Tell You This, but I Tried the Watermelon With Mustard TikTok Trend
by Kalea Martin 6 days ago