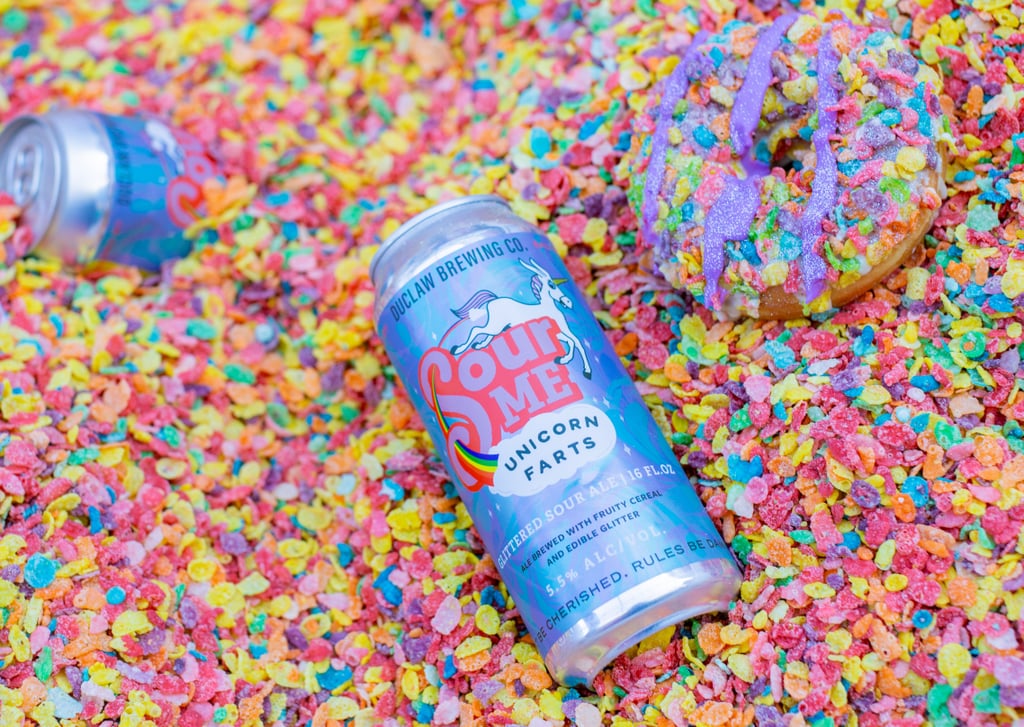 This "Unicorn Farts" Beer Is Brewed With Glitter and Fruity Pebbles, and I Need It Now

I never knew I needed glittery beer in my life, but then I laid eyes on the aptly named Sour Me Unicorn Farts beer, and now it's all I can think about. Made by Maryland-based DuClaw Brewing Company in partnership with Diablo Doughnuts, the sour ale is brewed with Fruity Pebbles cereal and edible glitter, making for quite the 'gram-worthy cereal-inspired sip. The shimmery 5.5 percent ABV beverage first made its debut for a limited time this past March, and DuClaw just announced that it's making a comeback in June 2020. Heck yes!

The brewing company revealed the beer's forthcoming return in the most glorious way possible: with a Lizzo-inspired photo shoot! DuClaw's main brewer and the owner of Diablo Doughnuts re-created Lizzo's viral Skittles bathtub photo by posing in a tub filled to the brim with colorful Fruity Pebbles cereal (32 boxes, to be exact) and Sour Me Unicorn Farts beer. Whoever does this brand's marketing deserves a freakin' trophy, TBH.

Starting in December, Sour Me Unicorn Farts will be available for distributor preorder in Washington DC and the following states: Alabama, Connecticut, Delaware, Florida, Georgia, Indiana, Maryland, New Jersey, New York, North Carolina, Ohio, Pennsylvania, Rhode Island, South Carolina, Tennessee, Virginia, and West Virginia. If the mental picture of tooting mythical creatures doesn't totally weird you out and you want to ensure your local liquor store sells the glittery beer come next Summer, we advise chatting with those store owners and politely asking them to order the beer from their distributors.

Ahead, check out those epic bathtub photos, then keep reading for some IRL photos of Sour Me Unicorn Farts to see just how glittery and magical it really is.