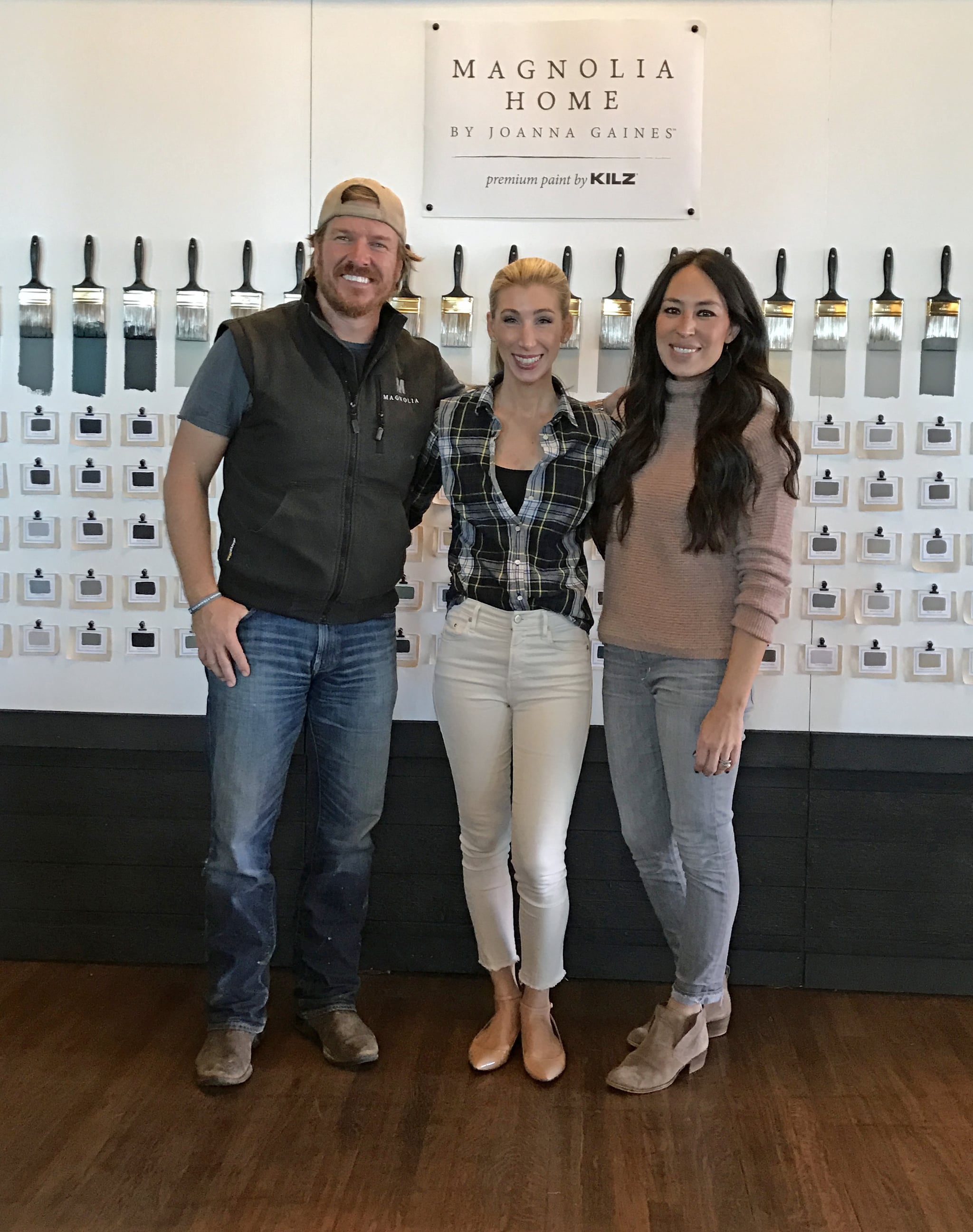 I recently lived the ultimate HGTV fan fantasy: I traveled to Waco, TX, to meet Fixer Upper stars Chip and Joanna Gaines. In fact, I didn't just meet them: I got to spend an entire morning with them. My intimate introduction was part of a press trip for the couple's Magnolia Home paint collection, which just launched a farmhouse-fabulous chalk paint line. I gathered with about another dozen-plus journalists to learn about the collection from Joanna, get painting tips from Chip, and spend a little time just getting to know the reality TV stars better.

I was thrilled to meet these homegrown superstars in person but also frankly a little bit nervous. Their on-camera personas are so down-to-earth and relatable that I fell in love with them over my television set. What if they didn't live up to my high expectations? Worse, what if instead of being down-to-earth and affable they were snotty and affected? I would be heartbroken. I headed into my meeting with the Gaineses concerned that my idealistic vision of them was in jeopardy, but I left completely smitten. Keep reading to see what Chip and Joanna Gaines are like in real life.

Related:
Joanna Gaines and Her Look-Alike Sister Are Serious #Goals

Yes, anyone who watches the show can tell that they're an attractive couple. But I can tell you that as beautiful as Joanna is on TV, she's even prettier in person. If I were Regina George and she were Cady Heron, I would ask her to sit with us at lunch. Her skin is flawless (I got a close-up look, and I could not spot a single wrinkle on the 38-year-old mother-of-four's face). Her black tresses tumble down her back Rapunzel-like, the ends twisting into soft, effortless curls. We met at 8:30 a.m., and there was no glam squad on site contouring Joanna's cheekbones or carefully coiffing her hair. She's just naturally gorgeous. If I didn't love her, I would hate her.

What You See Is What You Get

One of my biggest worries about meeting Chip and Joanna in person was that Chip's goofy persona or the couple's playfully romantic antics on television would turn out to be a phony act put on for the camera. I saw no evidence of this. True to HGTV form, Chip was full of silly jokes, Joanna was there to play the straight man keeping him in check, and neither seemed to take themselves too seriously. They sat side by side on a sofa during our interview, and I watched as several times they mindlessly removed a piece of lint or strand of hair from each other's shirts. Could they be putting it on for the reporters? Sure, but I was there, and it didn't feel that way.

They Know Their Stuff

Going into this press trip, I assumed that this was a paint collection Joanna had thrown her name on and was obligated to promote. I couldn't have been more wrong. As I came to learn, this paint collection was crafted by Joanna down to the last detail. It's the result of her years of experience designing homes combined with her now-famous personal farmhouse aesthetic. She made decisions from the number of color options (she capped it at 150 great colors because any more makes the color selection process too overwhelming) to the paint can itself (she insisted the manufacturer, who normally packages paint in plastic containers, design a brand-new vintage-style tin paint can that looks attractive just sitting on the shelf). And Chip's demo mastery was equally as apparent as he discussed past projects and shared his pro painting tips. The Gaineses are not wannabe reality stars who picked up house flipping to get on TV. They're talented home pros who were thrust into the spotlight.

Related:
The 3 Things You Must Agree to Before Being Cast on Fixer Upper

They're Surprisingly Tall — but Not Larger Than Life

I'm a respectable 5'7", so when someone is much taller than me, I notice it. I had to look up at Chip, who stands well above 6 feet. And in her signature boots, Joanna had a couple inches on me. But outside of being taller than average, the couple was very low-key. There was no big entourage, scene when they made their big reveal, or back room where they hid away. They were milling around and approachable, genuinely invested in the success of the paint presentation, wanting it to be a great experience for the reporters.

With their humble attitude and homegrown persona, it's easy to forget that Chip and Joanna are smart cookies. They'll tell you hard work is the secret to their success, but after listening to them talk about what they do and how they do it, I can tell you that business savvy played a big role as well. They've maximized their complementary design and construction skill sets, thoughtfully but aggressively pursued business endeavors, and surrounded themselves with a strong local team. They're pros in the best sense of the word, and it shows.

They're Grounded and Appreciative

At a certain level of fame, it would be all too easy to feel entitled and treat others as if you're doing them a favor just by being in their presence. That is not how Chip and Joanna are. They went out of their way multiple times to tell me how much they love POPSUGAR and how appreciative they are of our coverage of them, citing specific examples like a Facebook Live video we did together. And they weren't just kind to me; they made everyone feel special. They started off the session by going around the group and asking all the writers to introduce themselves. They listened, unhurried, and found a commonality to connect with every single person in the group on, be it Chip telling an anecdote about the city a reporter was from or Joanna noting a great story their outlet had written. Their behavior went beyond just being nice and professional — they were kind. When asked how they stay so humble, they responded that their strong faith keeps them firmly grounded.

Travel and expenses for the author were provided by KILZ for the purpose of writing this story.

Simone Biles
No, Simone Biles and the US Gymnastics Team Didn't "Settle" For Silver — They Won It
by Maggie Ryan 3 days ago

Gossip Girl
The Gossip Girl Reboot Has a More Diverse Cast, but It Still Lacks Representation
by Charlene Masona 3 days ago