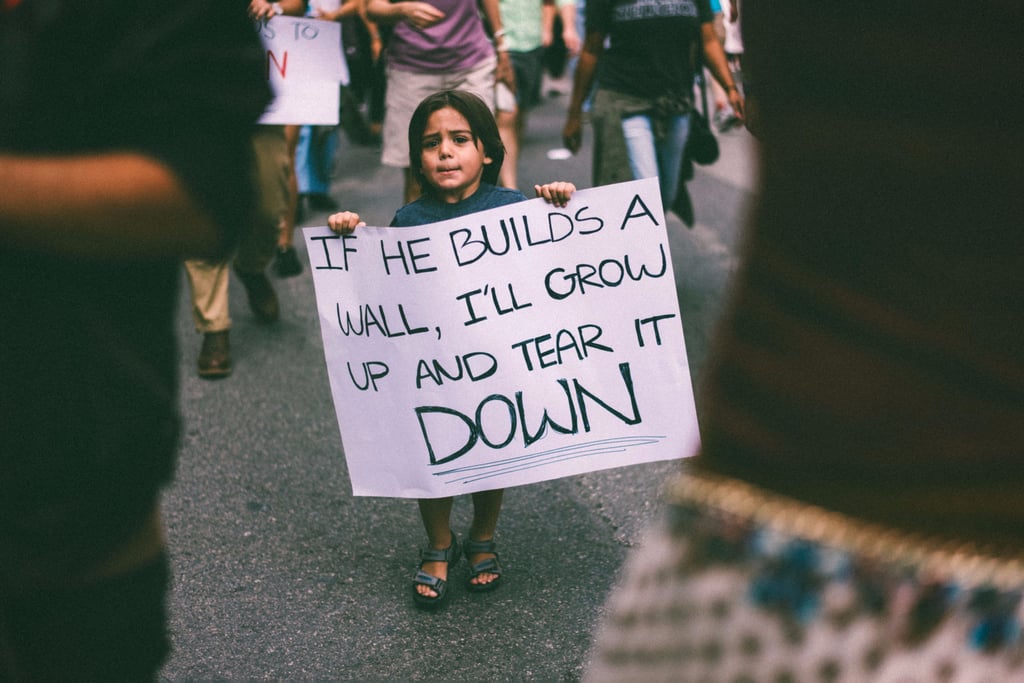 This 3-Year-Old Boy Has a Clear Message of Love: "If He Builds a Wall, I'll Grow Up and Tear It Down"

Three-year-old Kaio has the most important message of love we've yet to see after the 2016 presidential election and subsequent anti-Donald-Trump protests: we can count on young generations to stop hate. The message resonated across the internet with the photo of the young boy, taken by photographer Abigail Gorden at a Los Angeles protest on Nov. 12, holding a sign that reads "If you build a wall, I'll grow up and tear it down" going viral.

"I was drawn to this little boy because he was marching amongst mostly adults, but looked equally determined. He seemed anxious but strong, which I feel you can see the by the expression on his face. It was both sad and heartwarming to see a child joining the protest. To me, this photo signifies the impact of fear this election has had across the entire nation," said Abigail via email.

Brisa Pinho, who is Brazilian-American and writes about raising Kaio on her blog Single Mom Out Loud, spotted her son online after the photo was shared hundreds of times on social media. Via email she told us the story behind the sign Kaio is holding:

I wanted to show up to show my support for everyone who is feeling scared with the results of the election. I wanted to stand up against the racist rhetoric of Trump's campaign. Kaio is only 3, and he likes to do anything that involves music and crowds, so I knew he would enjoy the march . . . I thought it was a good idea to create a bold sign as if it was my son saying it. The wall I speak of is figurative — a wall of hate and racism and xenophobia that, if built, in the years ahead will be teared down by my son and his generation.

But even though Kaio is only 3, he knew his presence at the march was important. "He doesn't understand what protesting means yet, but he knows we were there to show support for good people. As he says: 'Let's walk against bad guys, mommy!' I think it's important for children to learn from an early age to stand up for what's right, for others who can't stand up for themselves and to know that they have the power to make their voices heard."

So how are Brisa and Kaio dealing with his new found internet fame?

A lot of support of love pouring his way. I did get some nasty sexist and racist messages assuming my child and I are undocumented and threatening to put us on the other side of the wall, but I read through those comments and I try to let them go. I understand those people are angry and afraid for their own reasons and fear makes people act out hatefully. In the end, my child is just promoting a message of inclusion and togetherness. And that's more powerful than anything negative internet trolls have to say.

Scroll ahead for more photos of Kaio at the protest, and find out what organizations are worthy your money and time post-election.