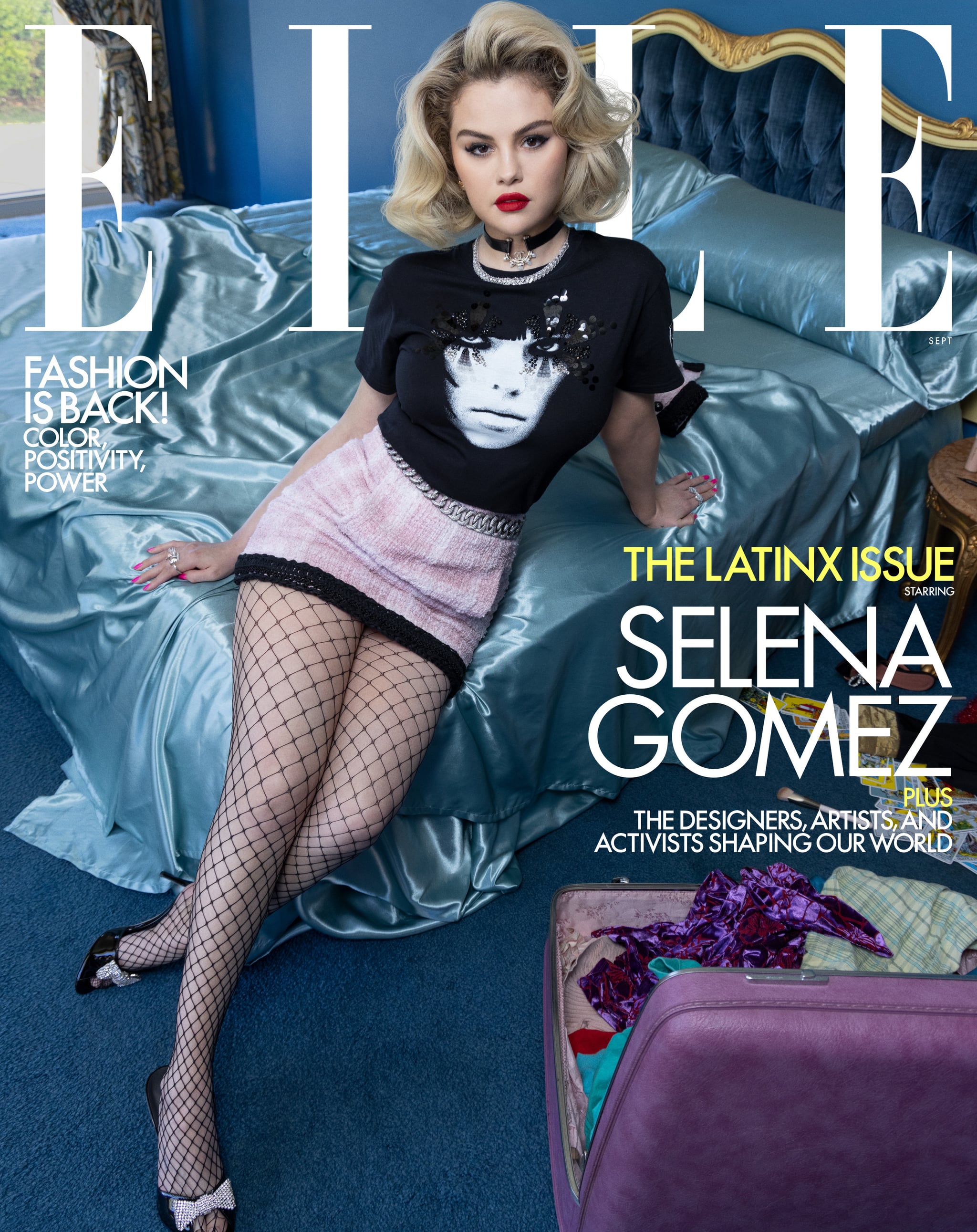 I must admit, when I learned about Elle's September 2021 issue — the brand's first Latinx issue — I had mixed feelings. My initial thought was, this is great! It's about time we saw more print magazines publishing issues that amplify our voices and elevate the Latinx community. But there was something about seeing Selena Gomez channeling Marilyn Monroe with platinum-blond hair, on the cover of the brand's first Latinx issue, that didn't exactly sit well with me. I couldn't initially put my finger on it, but after noticing other Latinx folks on Twitter expressing their same disappointment in seeing Gomez sporting blond hair for this very specific issue, I realized there was something deeper brewing here, and it goes way beyond Gomez's hair-color choice. Because I don't condone cancel culture, I decided to sit with it a bit and unpack what was coming up for me and possibly for others.

Elle announced the news on Twitter with an image of the new cover and a caption that read, "For ELLE's Latinx Issue, @selenagomez opens up about her struggles with mental illness, shooting @hulu's 'Only Murders in the Building,' with Steve Martin, and why she doesn't know her own Instagram password."

Not everyone was thrilled with the decision to feature Gomez, who wasn't just the cover star but also worked as a guest editor for the special issue. One Twitter user wrote: "Selena Gomez being the face of Latinx is so funny. Do BETTER Elle." Another tweeted, "Not a blonde Selena Gomez for the Elle Latinx issue." One user tweeted, "latinx where?? She's a whole yt woman."

The cover itself is gorgeous, and Gomez looks beautiful and strong and appears quite comfortable in her skin.

The cover itself is gorgeous, and Gomez looks beautiful and strong and appears quite comfortable in her skin. Her interview in many ways mirrors that. It's refreshingly honest, to say the least. She opened up about everything from her health issues with lupus to her struggles with living with bipolar disorder to where she's at with everything today.

"My lupus, my kidney transplant, chemotherapy, having a mental illness, going through very public heartbreaks — these were things that honestly should have taken me down," Gomez told Elle. "Every time I went through something, I was like, 'What else? What else am I going to have to deal with?'" She shared how helping others is what's kept her going and what has kept her from potentially hurting herself.

Now that I laid down some context behind Gomez's recent story, you're probably asking yourself, why does her blond hair even matter? It technically doesn't, to be honest. Gomez has the right to do whatever she wants with her hair. She can dye it blond, she can dye it baby blue, and she can shave it all off if she chooses. It's her body, and it's her choice. And to be clear, her choice of going platinum blond not only doesn't make her any less Latina, but it also doesn't make her look any less Latina, because there's no such thing as one Latina look. The Latinx community is not a monolith. We consist of various races and cultures, and white Latinas with blond hair and blue eyes very much exist — let's not forget about that. But that's not really the issue we're tackling here; the issue is why do folks (including myself) feel so strongly about Gomez rocking blond hair for this cover? I believe it touches on a much bigger problem that still very much exists today: the lack of representation of the Latinx community as a collective.

If you're a Black or brown Latina living in the states and you were bothered by this cover issue, I feel you, I see you, and I understand you.

If you're a Black or brown Latina living in the states and you were bothered by this cover issue, I feel you, I see you, and I understand you. Most of us melanated Latinas didn't grow up seeing a lot of Latinx folks who look like us in media. We still don't see enough of it, which is why so many of us get worked up or roll our eyes — as I did — when cover issues like this come out. It's not that I'm not thrilled about the new issue or upset that Gomez is on the cover — I'm actually a fan of hers. No one is trying to cancel Gomez or even Elle; I'm certainly not. But while I celebrate the fact that Elle finally came out with an issue dedicated to the community and I'm genuinely happy for Gomez, it does feel a bit same ol', same ol' for me. How does this cover make other Latinx communities feel seen? It doesn't.

Here's the thing; while we can acknowledge that white Latinx folks are just as much a part of the community as brown and Black Latinxs, we also have to be honest about the fact that white Latinx folks have been the face of beauty and media pretty much since the beginning. Our communities have been plagued by Eurocentric beauty standards for centuries. That image of Gomez with platinum-blond hair, fair skin, and a model-thin body is what we all grew up believing was the standard of beauty. It's what we all saw in the novellas our moms and abuelas watched, and it's what we've seen in the films and TV shows we've consumed most of our lives. It's nothing new. And I think it's fair to say some of us were triggered to see that same image in a very new magazine issue at a time when everyone is not only talking about diversity and inclusivity efforts but also acknowledging that Indigenous and Afro-Latinx folks are still not given the visibility they deserve.

I spoke to Josie Rosario, an NYC licensed therapist, mental health expert, and intuitive who does a lot of work around racial healing, about what was coming up for me. My trigger was basically a trauma response to the lack of representation I've seen of my community my entire life. She explained how triggers oftentimes live in our bodies. We don't always have the words to explain them until we reach a moment of awareness to cognitively put words to it. She went on to tell me that the first reaction starts in our bodies; it perceives a lack of safety before your brain is able to register it and eventually make sense of it all.

"You think about all the civil unrest and all the attention that has been placed over the last year and a half around the importance and consistent erasure of Black bodies, and here is this magazine doing it again."

"It can be very triggering for someone who doesn't look like Selena Gomez, an Afro-Indigenous or Afro-Latinx woman, to see that because this is historical. This can incite a lot of rage because we are consistently and constantly erased even when there's been so much conversation around the importance of representation, especially in the Latinx community," Rosario said. "Even though it's an umbrella term, for folks whose culture comes from Latin America, it tends to erase Black and brown people. So now someone like you sees a cover like that, it's triggering because it reminds you of a time that you perceived threat just by being erased. Again, you were taking a back seat and this white Latinx woman (in this case Selena Gomez) is now taking center stage and representing an identity that you share with her, so of course, it can be very triggering because it's like again — we're here again? You think about all the civil unrest and all the attention that has been placed over the last year and a half around the importance and consistent erasure of Black bodies, and here is this magazine doing it again. How can that not be triggering?"

I can acknowledge and feel joyful around the fact that an issue dedicated to the community finally exists while also pointing out that I think Elle could have done better.

In many ways, the conflicting feelings that came up for me when I learned about this new cover issue were similar to the ones I felt with Lin-Manuel Miranda's In the Heights film. I'll be the first to tell you I absolutely loved that movie. I visited the set in 2019 and met and interviewed all the actors, I keep playing the soundtrack, and I cried when I first saw the screener. But while I can acknowledge it is a beautiful masterpiece that highlights a community in Washington Heights that's almost always left out of mainstream media, I can also acknowledge that it does not make the Latinx community as a whole feel seen. Sure, I saw myself in Nia, the character played by fellow Afro-Dominicana Leslie Grace. But Washington Heights is predominately made up of Afro-Latinx communities, many of who are significantly darker than myself and Grace, and that is not reflected in the film's main cast. I can say that while also celebrating that this film is a first for us in many ways.

This is how I also feel about the Gomez cover. I can acknowledge and feel joyful around the fact that an issue dedicated to the community finally exists while also pointing out that I think Elle could have done better. I would have loved to have seen someone who was browner, thicker, and possibly not as mainstream as Gomez. I think it could have been a great opportunity to highlight someone who has been heavily involved in the community and who is representative of what we don't see enough of when it comes to Latinx representation in the media. In this day and age, that's not just what I want to see — it's what I expect. I think it's fair to assume that a lot of Latinx folks who look like me or darker probably feel the same way. We're ready for a much bigger change across the board, and this cover issue just didn't seem to reflect that.