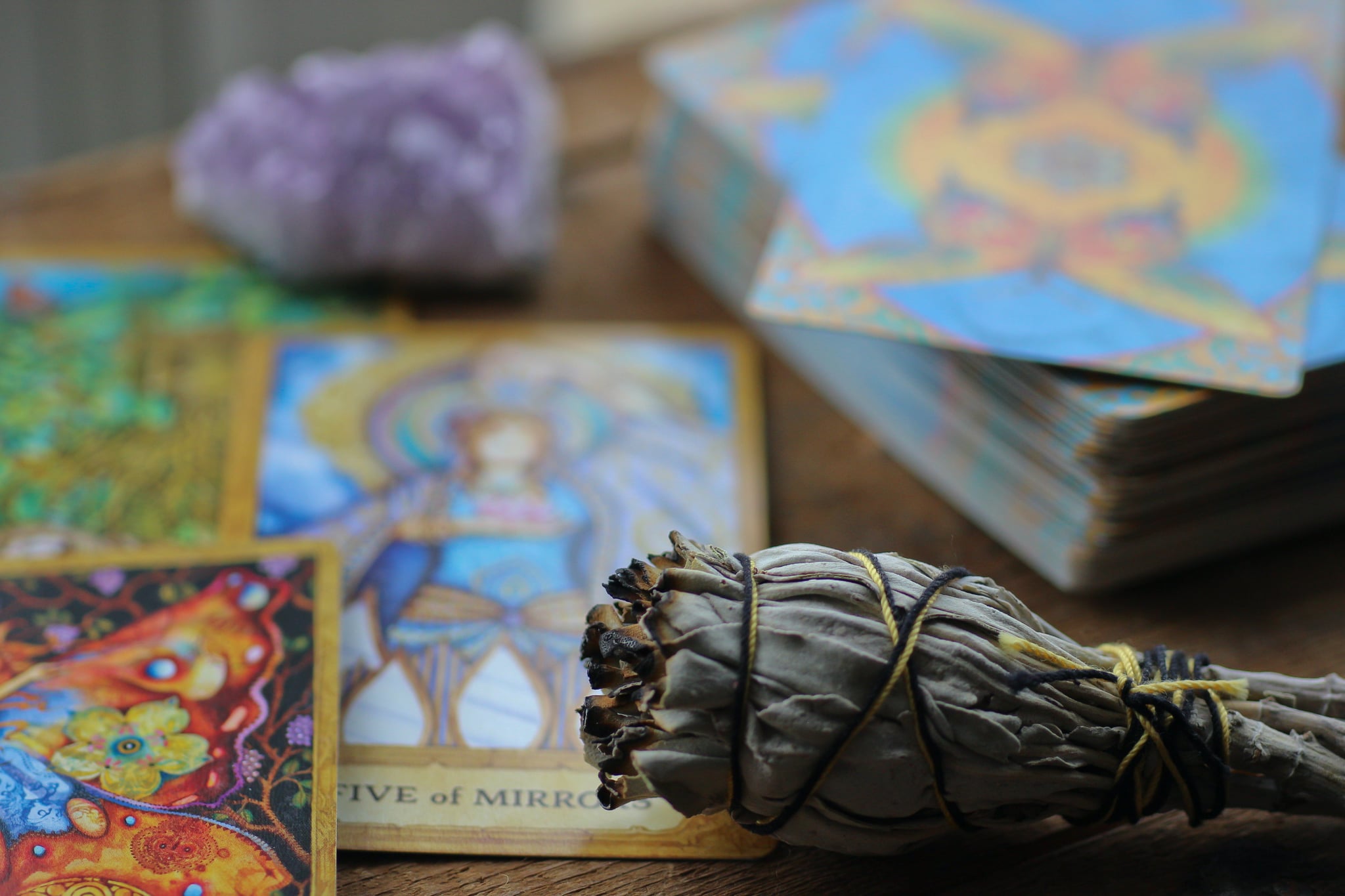 As more Latinxs begin to explore alternate forms of religion and spirituality, social media continues to play a major role in the accessibility of information. Unfortunately, over the last year the online spiritual community has seen a significant uptick in impersonators and scammers targeting people who are oftentimes desperate or just looking for answers. It was mid 2021 when the messages started flooding my @brattybrujita inbox. "Hey girl, is this you? I got a message from your backup account. Did you make another account?" is an example of the type of messages I was receiving from clients. In some instances I'd be able to see the account in question, most of the time the scammers would block me preemptively and then begin aggressively adding and messaging my followers. They'd seemingly clone my account uploading a combination of old photos, current reels, and recent instagram stories. They'd even add my linktree and bio.

Related:
What Are Spiritual Baños, and How Do I Take One?

It was incredibly distressing. The thought of my followers falling prey to impersonators was scary and angering. I would spend hours trying to look up cashapp names and email addresses that ultimately led nowhere. However, the more I began to dig, the more I realized that the reason so many people were actually falling for it was because they had no idea what a real encounter should look like. Conversations with other brujas and online spiritual practitioners led to many theories about what was going on, but generally we would all agree that the public needed to be educated on what was acceptable and what was a red flag. Clients also need to do their due diligence before shelling out their hard earned cash. Here are 3 major red flags that everyone should know and look out for when dealing with any spiritual practitioner.

Most of the messages start out with stereotypical esoteric language like, "grand rising beloved" and then cut right to the chase with messages like, "I would love to consider you for a reading." First of all, this is just a no. Ethical practitioners will never message you first or seek you out to perform a reading on you for many reasons. The main reason being that offering to help people when they aren't ready just doesn't work. "It's important to never be impulsive when working with a spiritual practitioner," Astrologer and Tarot reader Blanca Espinoza (@moon_chola) told POPSUGAR. "Take your time. It's also important to look at how the person speaks. Not only because scammers tend to use a weird language pattern like "my beloved, the energy is so high vibrational I was drawn by your light to guide you…" but because you do want to work with someone who speaks your language. We are real people. We speak like real people."

At some point we all learn — bruja or not — that no matter how much we want to help people we can't force someone to want to heal or work on themselves. "I've always felt [that the] people meant to find me will find me on their own terms," Bruja Nicole Bloodmoon (@blood.moon.bruja) revealed. "I just put myself out there and I know those meant for me will find their way to me. I will never go out of my way to be in anyone's personal space." When someone is ready to start their spiritual journey they will seek someone out and make it happen. There is absolutely a code of conduct that real spiritualists follow when dealing with clients.

Related:
What Exactly Is Palo Santo, and How Should You Use It?

Another thing to look out for are the strange and random things scammers will ask you for. The last scammer who was impersonating me would ask for a photo of the person's palm, their zodiac sign, and their favorite fruit — all things that make absolutely no sense together but to a novice might sound like a cluster of things that might reveal something hidden about them. The problem with these scammers is that they are often partially right. Can someone read a photo of your palm — yes. Can your zodiac reveal things about you— yes. But if they're doing a tarot or mediumship reading all they need is your name. If it's astrology they need your birthday and birth time. If you're going to a priest like a Babalow, they need your full name and birthday. These are also things we would never do in the DMs, especially with sensitive information. I would ask everyone to be skeptical when a reader is making strange requests. You are well within your right to ask them why they need a photo of a piece of fruit.

Film and TV have done a great job spreading misinformation about what spirits can actually do. Everything from possession to spirit communication has been totally misrepresented and can cause confusion for those who don't know. This is particularly harmful when it comes to scammers taking advantage of people's desire to see someone reaching out to them as a "sign." Delivering unsolicited messages is a tricky gray area, because as a medium I've definitely delivered random messages for people. One time I was at a bar with friends when I felt compelled to tell a man to make sure he was careful and sober while driving home that night because spirit felt he could have an accident. He looked stunned, but once I said what I needed to say I felt the magnetic pull that led me to him released and I went about my night.

I've been called to comfort and/or warn people many times but approaching a stranger in real life is quite different than messaging them out of the blue over Instagram saying you were "drawn to their energy." In fact, online scammers make our jobs that much harder because as it is, there is already a baked in skepticism of esoteric practitioners especially amongst heavy Catholic or Christian households. "Many Latinx people are disconnected from their ancestral spiritual practices or haven't decolonized their view about these practices in general," Healer and Bruja Emilia Ortiz (@ethereal.1) stated. "There can also be a general distrust due to experiences in the church or family experiences that have been shared. Ultimately, a lot of people don't have faith in these practices because it is unrealistic to them that someone can be a medium or psychic of any kind. Unfortunately, this adds to people's skepticism because it's a 'see!' moment that affirms the idea that anyone in that field is a fake. It adds another level of difficulty to legitimize our work."

Spotting a scammer isn't hard when you know what to look for. Check and see how old the account actually is, a new account with thousands of followers and little post engagement is a red flag. Scammers are also known to just change their username and begin impersonating someone else with the same account. Also check and see the type of content they have. If the photos look like screen shots and the reels/videos look screen recorded that's another red flag. If they give you a cashapp code or email with a completely random name/email attached to it, that's also a red flag. It might also be a good idea to treat these so-called practitioners like a catfish — ask for a photo of them doing a certain gesture or holding a certain item. If they can't comply, you know what it is.

Anyone who makes you feel pressured or uses fear as a tactic to get something from you should be immediately questioned no matter what it is. So if a practitioner contacts you and gets really pushy, think twice before engaging. Scammers will often resort to calling people "stubborn" and making them feel guilty about not wanting to connect. Healer and Tarot reader Bree Amos (@badandbrujita) points out that impersonators are spotlighting unethical practitioners who create codependency with their clients as well. "It's making people wake up and realize that just because someone is "spiritual," it doesn't mean that they can automatically be trusted. People are learning how to use that discernment now," Amos said.

Any spiritual practice should hand you your power back and show you how to use it. Anyone considering a practitioner should go to their page and see if they have already posted about scammers. Nine times out of 10 they probably have, which lets you know to report and block the person contacting you. "I thank God and my ancestors that people using my name and images on Instagram hasn't affected my reputation or finances, but that's not without me being vigilant about posting a list of ALL my social media pages across all platforms daily, posting disclaimers underneath the captions on all of my posts and doing a ton of protection work," Amos added.

There is also another added layer of legal protection that practitioners can explore aside from asking followers to report and block. The Digital Millennium Copyright Act (DMCA) is a federal law that holds content platforms like Facebook accountable in the case of copyright violations. There are quite a few forms to fill out and links to send but this seems to be the only real way to get scammers taken down for good. Check out an Instagram post here that does a great job outlining the full process. But it doesn't stop new scammers from doing it again and it is clear that more protections are needed for users, especially for people who use social media for their businesses because the financial, energetic, and emotional labor is real.

Blanca Espinoza has been dealing with aggressive scammers for the last year and it has taken its toll. "Scammers have impacted me immensely. The time that it has taken me to report them as copyright infringement cases, respond to DMs explaining to people that I am the real me and reporting their payment information has cost me so much time and energy. I have spent full days trying to clear it up. They have also cost me clients who feel I am not trustworthy because they cannot tell me apart from the scammers," Espinoza said.

At the end of the day, what we really need is support. This large platform has become a breeding ground for abuse. And it's time that the platform is held accountable or at the very least verify our real accounts. Astrologist and Psychic Bruja Jasmin Alejandrez-Prasad (@esoteric_esa) thinks Instagram should hand out verification marks more freely. "Clearly if you're having to combat imposter accounts that means you have or are part of a strong community online and therefore we should [be able to] protect our communities to the best of our ability," she said. Ultimately what most people want from the platform is transparency and protection rather than the zero care or communication we've gotten from Instagram.

Ultimately, the due diligence lies in the hands of the person being contacted because unfortunately, we are going to have to continue to play the offensive. As for the Brujas, readers, and practitioners, we'll just have to keep doing our protection work, posting disclaimers, and working against the grain until social media platforms start protecting and empowering their content creators. But until then stay safe out there, question everything, and don't get scammed!